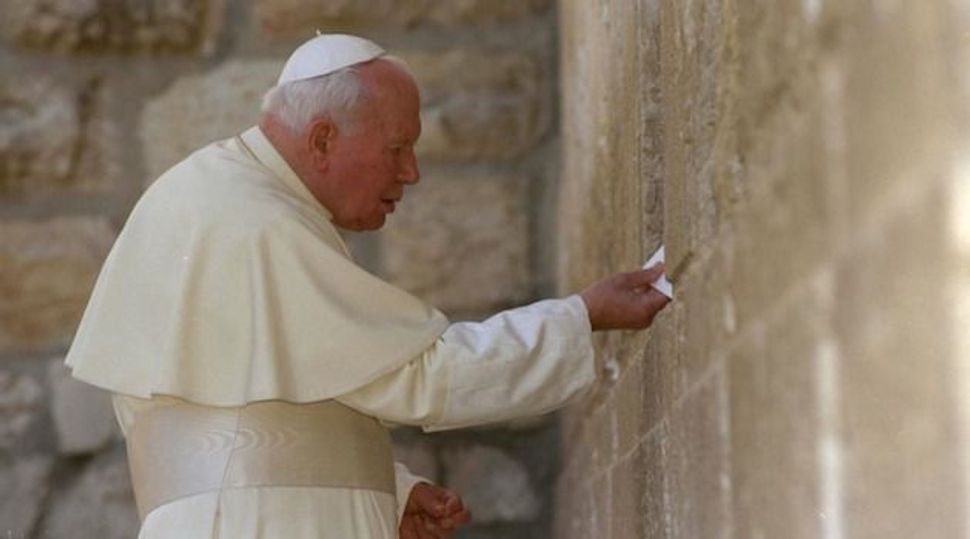 (JTA) — Popes John Paul II and John XXIII are being declared saints of the Roman Catholic church on April 27, which is also the eve of Yom Hashoah, or Holocaust Remembrance Day.

It’s a coincidence but a notable one.

“These two popes transformed not just the church, but made a bigger impact on the outside world — and on us,” said Rabbi Gary Bretton-Granatoor, a vice president of the World Union of Progressive Judaism and longtime participant in Jewish-Catholic dialogue. “As a Jew, my life, and the safety and security of Jews, have been improved by the actions of these two individuals.”

Pope Francis, who took office little more than a year ago, will preside over the solemn ceremony at the Vatican, taking place on the day Catholics celebrate as the Second Sunday of Easter. It was Francis who decided to canonize the two former popes in an unprecedented joint ceremony.

Rome is bracing for millions of the faithful to converge on the Eternal City for the event, which will also be attended by representatives of the Jewish community including Rome’s chief rabbi, Riccardo Di Segni; the American Jewish Committee’s international director of interreligious affairs, Rabbi David Rosen; and Francis’ personal friend, Rabbi Abraham Skorka of Argentina.

John XXIII, who reigned from 1958 until his death in 1963, initiated policies that changed nearly 2,000 years of church teaching.

First, he canceled the words “perfidious Jews” from Good Friday prayers. Then, to reform and update the church, he convened the Second Vatican Council in 1962. This Council in 1965 issued the Nostra Aetate declaration, a landmark document of less than 1,600 words that called for Jewish-Catholic dialogue and rejected the ancient Christian stigma against Jews as killers of Jesus.

More than two decades earlier during World War II, as Cardinal Angelo Roncalli, the future pope had worked actively to save Jews, using his position as papal nuncio in Turkey to draw up false papers for Jewish refugees.

“Jews will always remember Pope John XXIII as the animating force behind the Vatican II Council that changed the way Catholics looked at other faiths, especially Judaism. The Nostra Aetate document that ensued from it pulled the plug on centuries of theological anti-Semitism and put relationships between Christians and Jews on a new footing of mutual respect”, observed Rabbi Yitzchok Adlerstein, the Wiesenthal Center’s Director of Interfaith Affairs.

Pope Francis highlighted these actions while speaking with reporters last year about the canonizations.

“How many testimonies of false baptism he did in Turkey in favor of the Jews!” Francis said. “He was a courageous man, a good country priest, with such a great sense of humor — so great, and great holiness.”

John Paul II, who reigned from 1978 to 2005, made Catholic-Jewish reconciliation a cornerstone of his papacy. Born Karol Wojtyla in Wadowice, Poland in 1920, he grew up with Jewish friends and was an eyewitness to both the Holocaust and totalitarian communism.

“John Paul II’s papacy built on John XXIII’s legacy in many ways, opening new horizons through a series of public gestures that made impacts across the globe,” said Lisa Palmieri-Billig, the AJC’s representative in Rome and liaison to the Holy See.

In 1979, on his first trip back to Poland, he prayed at Auschwitz, and throughout his reign he repeatedly condemned anti-Semitism, commemorated the Holocaust, and met with Jewish leaders and laymen.

In 1986, he made history by crossing the Tiber River to Rome’s Great Temple to become the first pope to visit a synagogue. There he embraced Rome’s then chief rabbi, Elio Toaff, and honored Jews as Christianity’s “elder brothers in faith.”

Moreover, John Paul oversaw the establishment of diplomatic relations with Israel and prayed for forgiveness for Catholic persecutions of Jews in the past.

His emotional pilgrimage to the Holy Land in 2000 left “the indelible picture of his sticking this prayer into a crack in the Western Wall,” Palmieri-Billig recounted.

Rabbi Toaff of Rome, now 98, recently compared John Paul to one of the 36 righteous people who, according to Jewish mysticism, exist in every generation.

John Paul’s visits to the Rome synagogue, Auschwitz and the Western Wall, Toaff said in an interview last week with the ADNKronos news agency, “were milestones that have marked the path that he, with courage and firmness, wanted to carry out as acts of sincere affection and understanding toward the people of Israel and of reparation for the suffering and wrongs inflicted over the course of history that culminated in the tragedy of the Shoah.”

The popes who followed John XXIII and John Paul have built on their legacy. Pope Francis, who had a close relationship with the Jewish community when archbishop of Buenos Aires, has demonstrated attention to Jewish issues since his election in February 2013 and will visit Israel, Jordan and the Palestinian territories in May.

On the whole, said Bretton-Granatoor, “things today are pretty good between Catholics and Jews.”

But some sticking points do linger. These include the issue of opening the Vatican’s World War II archives to clarify the wartime role of Pope Pius XII, whom critics accuse of failing to act to save Jews during the Holocaust.

The greatest challenge, Bretton-Granatoor said, is to ensure that the changes wrought by John and John Paul resonate with coming generations of ordinary Catholics — not just the highest ranks of the Church.

“The upper echelons have done hard work,” Bretton-Granatoor said. “But has it percolated down to the pews? To the average priest and parishioner? That is the challenge.”