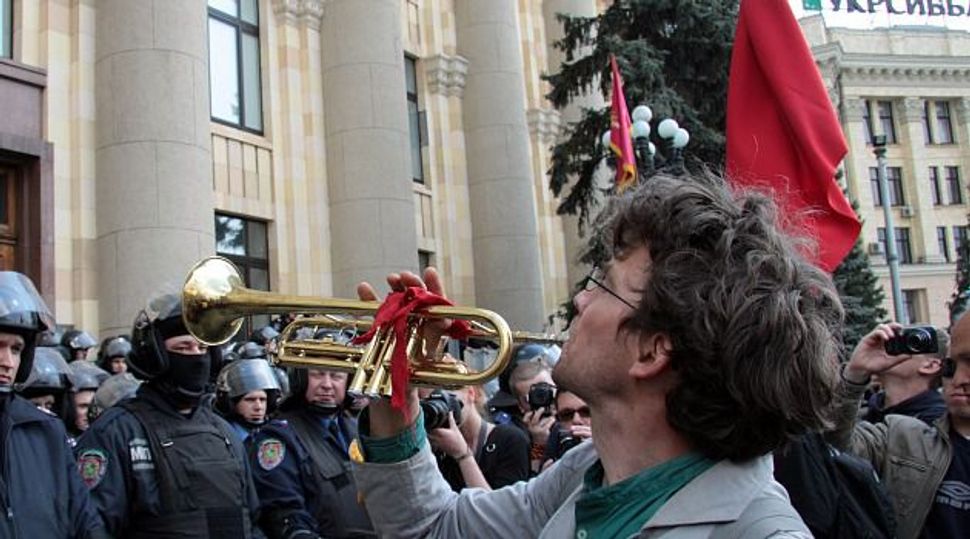 In the basement of the Jewish Cultural Center, a small group of folks in their 20s and early 30s comes trickling in for the weekly Friday night Sabbath celebration.

It’s fewer people than usual, about 15 participants, since many have gone out of town for the May Day holiday, but the members represent a wide range of backgrounds. Some attendees found out only few years ago that they were, in fact, Jewish, after they received a phone call from the Jewish Agency for Israel. Other worshippers remember what it meant to have “Jew” written on their passports as their nationality during Soviet times. Pictures and banners around the center show smiling adults and teenagers at various outings and on holidays. Advertisements for trips to Israel are everywhere.

As the women get ready to light candles, the men make sure they are all wearing their yarmulkes. And the May 2 Sabbath service begins, as usual.

In a sense, that is the news here.

Though eastern Ukraine is saturated with stories of violence and upheaval, and Russian troops were massing across the border a mere 30 miles from Kharkiv, everything has continued as normal in the city, including activities at the Jewish center.

“If I didn’t have my mother calling me, asking me what was going on, I would have no idea what was going on; things are so peaceful here,” said Alla Magas, 29, a member of the Jewish community.

The situation — a kind of delicate equilibrium in which civil life continues even as troops and militias increasingly mobilize — has been described as an echo of the so-called “phony war” that characterized World War II from September 1939, when the Allies first declared war on Germany after it invaded Poland, until the Battle of France, in May 1940.

Magas is a good example of the determined normalcy with which many of Kharkiv’s estimated 45,000 Jews are facing daily life. She recalled having “an unpleasant feeling” when she heard about the anti-Semitic leaflets that mysterious men in masks handed out to Jews in Donetsk, some 150 miles away, as they left Passover services in April. The fliers, which ordered all Jews in the town to register with the pro-Russian Donetsk People’s Republic, whose militias had taken over local government buildings, were condemned as fake by the leader of the rebel faction, and dismissed by local Jewish leaders as a provocation. “The scariest things are what they show in the news, not what actually happens in real life,” Magas said.

Vladimir Yakimov, 25, is another Jew whose response to the political pathology growing around him is simply to shut it out and carry on with life. “I’ve unplugged my television and taken it out of my room so I can’t watch it,” said Yakimov, who is originally from a small town near Slaviansk, which has become one of the hotbeds of pro-Russian separatists. “Of course there’s a threat to Jews, but when the situation is so unstable, there is a threat to everyone.”

A recent survey from the Organization for Security and Co-operation in Europe found that there has not been a real increase in anti-Semitism in Ukraine over the past few years and there has not been a surge of genuine anti-Semitic activity in the past several months. Rather, there have been several provocations, and political rather than anti-Semitic statements, said Josef Zissels, vice president of the World Jewish Congress and chairman of the General Council of the Euro-Asian Jewish Congress.

“There is more anxiety among Jews [because of these provocations], but there isn’t a special threat of violence to Jews,” Zissels said.

In the media war between the West and Russia, both sides have continued to paint their opponents as anti-Semitic in an effort to sway, or frighten, the Ukrainian Jewish community to their side. But winning the support of Jews as a bloc has proved impossible — not least because the Jews in Ukraine come from highly diverse backgrounds and political inclinations.

Daniil Padafa, a 21-year old Jewish student from Crimea who studies in Kharkiv, said he gets most of his news from his parents, who just don’t understand why eastern Ukraine can’t have a referendum on breaking away from Ukraine the way Crimea did in March. No member country of the United Nations except Russia — which soon thereafter annexed the territory — recognized the Crimean referendum, in which 97% of those voting backed annexation by Russia. Russia’s president, Vladimir Putin, later acknowledged that unidentified militiamen who seized control of government buildings in Crimea prior to the vote were Russian military.

But in the eyes of his parents, Padafa said, Westerners illegally ousted the constitutionally elected Ukrainian president, Viktor Yanukovych, who leaned toward Russia, during mass anti-government protests in February, and Crimeans peacefully demanded a referendum in response. It stands to reason for them that eastern Ukrainians should be allowed to demand the same, he said. Padafa said that he himself is nervous about ultra-nationalist factions taking part in Ukraine’s new interim government.

“The red-and-black flag of the far-right groups in Kiev should still make Jews nervous,” he said.

Elena Dankina, 49, said she isn’t worried about Svoboda’s ultra-right rhetoric. An avid supporter of the new government in Kiev ­— her nails were painted blue and yellow in support of Ukraine — Dankina said Svoboda has changed.

Dankina said that last November she protested alongside members of Svoboda when the so-called Euromaidan protests calling for Yanukovych’s ouster started in Kharkiv.

“If someone told me a year ago that I would stand calmly next to people from Party Svoboda, I would never have believed it,” Dankina told the Forward during an interview at Kharkiv’s Israel Cultural Center. “I categorically thought that Party Svoboda was not a party that I could stand next to.” But, she said, after the party was elected to parliament in 2012, it dropped its anti-Semitic rhetoric and went more mainstream.

Meanwhile, pro-Russian separatists, who are demanding a referendum on greatly loosening or breaking the ties between eastern Ukraine and the national government in Kiev, have revived symbols of Russian nationalism with unsavory associations of their own. This includes the black, yellow and white flag of the Black Hundreds, a xenophobic, ultra-nationalist Russian group that backed the czar at the turn of the 20th century and incited pogroms against Russian Jews.

Historically, neither side in Ukraine’s current political battle has been very good to Ukraine’s Jews, Rabbi Moishe Moskovitz, spiritual leader of the Kharkiv Jewish community, told the Forward. Both the government in Kiev and the pro-Russian separatists should “prove that they will allow an open society,” he said. Accusations of anti-Semitism by one side against the other contribute nothing toward this end, Moskovitz said.

Moskovitz, who is affiliated with the Chabad-Lubavitch Hasidic movement, said Kharkiv is in many ways an exception for Ukrainian Jews. The city’s mayor, Gennady Kernes, was democratically elected with the public knowing full well he is a Jew. During his tenure, Kernes has fostered a close, open relationship with the Jewish community, even giving a speech at the wedding of Moskovitz’s daughter. Under Kernes’s leadership, the local police, unlike in many other places, have also remained focused and responsive to direction from the town’s elected civilian political leaders.

Though Kernes almost died in an assassination attempt in late April, the political situation in Kharkiv has remained relatively stable, making the city itself an exception along Ukraine’s increasingly unstable border with Russia.

Still, as politically charged violence spreads through eastern and southern Ukraine, discussion of the topic has become increasingly emotional, the rabbi said. Kernes’s shooting, for which no one has yet been arrested, brought the danger much closer to home.

Moskovitz related how at a weekly religious class for businessmen at the Choral Synagogue, which he leads, discussions about recent events at the start of each class have turned increasingly to politics. Moskovitz said he gently reminds the group that a synagogue is no place for a political discussion.

Individual Jews may take personal stands, he said, but as a collective entity, “the Jewish community should wait and see how things turn out, rather than taking political sides.”