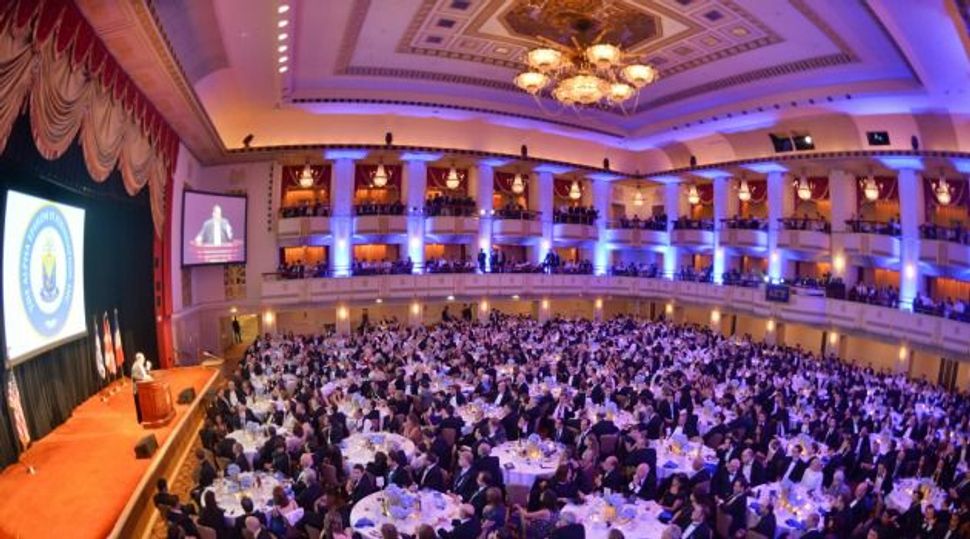 100 Years: The members of Jewish fraternity Alpha Epsilon Pi celebrate the group’s centenary at a gala dinner. Image by courtesy of aepi

When American Jewry’s major umbrella group on Israel met recently to debate a membership application from the dovish lobby J Street, some of the strongest opposition to it came from an organization better known for throwing beer-fueled parties.

Deliberations in the Conference of Presidents of Major American Jewish Organizations are secret. But the hawkish Zionist Organization of America thanked only one other group in its press release praising J Street’s ultimate rejection: Alpha Epsilon Pi, the all-male Jewish college fraternity whose executive director spoke against J Street at the April 30 Presidents Conference meeting.

AEPi, with more than 170 chapters and 9,000 student members, is a frat for young Jewish collegians. But it’s also the newest member of the Presidents Conference, accepted in December 2013 into the increasingly fraught ranks of the 50 leading national Jewish organizations.

So how did AEPi get into the Presidents Conference when J Street’s way was blocked?

“AEPi was very noncontroversial,” said Ken Bob, national president of Ameinu, a left-wing Zionist group that belongs to the Presidents Conference. “I’m generally a believer in the inclusive nature of the organization, so I had no central objection to it.”

Others questioned why AEPi, which does little work on Israel policy, was able to get into the Presidents Conference while J Street, an Israel policy group that supports a two-state solution to the Israel-Palestinian conflict, was not.

Rabbi Arthur Waskow, a former AEPi chapter president at Johns Hopkins University 60 years ago, went so far as to complain personally in a phone call to the fraternity’s executive director, Andrew Borans, who had himself cast the “no” vote at the Presidents Conference.

“When I said I was shocked and unhappy about AEPi’s vote, the first thing he said was that no one was supposed to know how anyone voted. Of course! — Then no one could complain!” Waskow, a longtime peace activist, related in a mass email he sent out to supporters of the Philadelphia-based Shalom Center, which he heads.

According to Waskow, Borans told him that “90% of their undergrads and 95% of their alumni” had urged the fraternity to vote against J Street’s admission. Waskow responded that the fraternity had never contacted him and asked how many of its members had been canvassed.

“He wouldn’t say,” Waskow related in his email blast. “Where did he find them? Well, he met them. Visiting fraternity houses. Raising money. Dinners.”

“AEPi’s votes and positions were a part of a private meeting, and we have no obligation to disclose or discuss,” she wrote the Forward in an email.

Daniel Tay, a student representative on AEPi’s Supreme Board of Governors and former head of Yale University’s AEPi chapter, also declined to share his opinion of the vote or to comment on whether the national organization had canvassed its membership in any way.

For those in the know, AEPi’s “no” vote on J Street should not have come as a surprise. Though ostensibly nonpolitical, the fraternity is fronted by politically active, right-leaning adult leaders and has close ties to major Republican donors.

Founded in 1913, AEPi says it initiates 2,500 young men each year and has had 93,000 members over the course of its history. The group’s current board chair — in the frat’s parlance, its Supreme Master — is Elan Carr, a Los Angeles County prosecutor.

Carr is running for U.S. Congress this year as a Republican for the seat being vacated by Rep. Henry Waxman. He has received the endorsement of House Majority Leader Eric Cantor, but Carr is considered a long shot in the heavily Democratic district.

Still, Carr’s AEPi brothers have supported his campaign. A couple of AEPi chapters have posted messages about the race on their Facebook pages, and at least one has asked brothers to donate. Borans, AEPi’s executive director, has given $2,600. So has Michael A. Leven, an AEPi alum and the president and chief operating officer of the Las Vegas Sands Corp.

Leven works for Sheldon Adelson, the Republican mega-donor and leading Jewish philanthropist who has emerged as a friend of both AEPi and Carr. AEPi made Adelson an honorary member at a banquet in 2013. And Adelson has given $5,200 to Carr’s campaign, as has his wife and his daughter, Miriam and Shelley Adelson. Leonard Adelson, his brother, has given $2,600.

AEPi also extended honorary membership to the Presidents Conference CEO, Hoenlein. That award came during an event in August 2013 that was tied to AEPi’s centennial. Others who participated in that three-day celebration included Leven and Josh Mandel, Ohio’s Republican state treasurer. His failed 2012 bid for U.S. Senate was backed by the Republican Jewish Coalition, of which Adelson is a leading supporter.

Though the frat has avoided the sort of political controversy that J Street was implicitly founded to create, the group has received more than its share of negative press. Since March, student papers at a handful of colleges have reported on local AEPi chapters being booted from campuses for violations of hazing and drinking rules.

In mid-March, Vermont Cynic reported that the University of Vermont would no longer recognize its local AEPi chapter, as the group had violated the terms of a previous suspension. The suspension came after the frat violated alcohol and hazing policies. In April, the University of Delaware student publication The Review reported that that school’s AEPi chapter had been suspended for a hazing violation. And New York University’s student blog NYULocal reported in May that that school’s AEPi chapter, the frat’s oldest, was under investigation for drinking incidents and was at risk of disciplinary action.

All three of those chapters are listed as currently active on AEPi’s website.

Presidents Conference membership committee chair Rabbi Vernon Kurtz, who is also president of the American Zionist Movement, said that the committee did not consider either AEPi’s political orientation or issues of hazing and drinking when discussing its membership bid.

“We did not deal with political leanings,” Kurtz said. With regard to disciplinary issues, he said, “Everybody has to police their internal business.”

Kurtz said that his committee had reviewed an application submitted by AEPi. “We examined AEPi on the basis of, is it involved in Israel programs which serve the mission of the Conference of Presidents. That’s how it was voted,” Kurtz said.

After reviewing J Street’s application, Kurtz’s membership committee chose not to vote on whether to recommend the organization; instead it sent the decision, without comment, on to the full Presidents Conference for a vote. With AEPi, by contrast, the committee voted and chose to recommend acceptance of the organization.

Kurtz said that Hoenlein played no part in his committee’s deliberations, nor did he attend meetings at which the membership committee discussed the J Street or AEPi application.

“The committee looked very carefully at AEPi,” Kurtz said. “They have grown greatly over the last number of years.”

Hody Nemes contributed to this story.