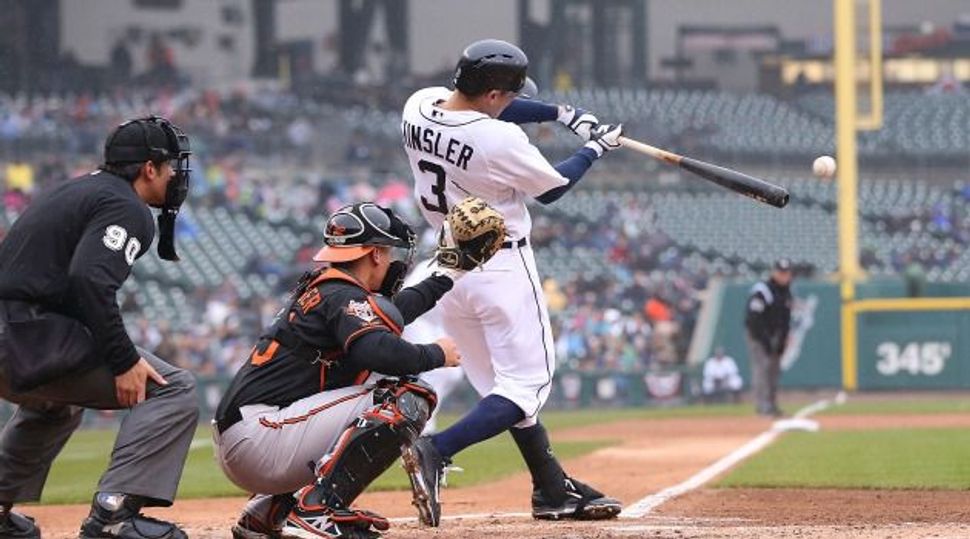 Two of a Kind: Second baseman Ian Kinsler takes a cut in one of his first games as a Detroit Tiger. In a rare coincidence, the Jewish star reports to a Jewish manager in Brad Ausmus. Image by getty images

(JTA) — The rarity arose in the initial meeting of first-year Detroit Tigers manager Brad Ausmus and his second baseman Ian Kinsler, newly traded from the Texas Rangers: a Jewish player reporting to a Jewish manager.

Ausmus was “raised the same way I was,” Kinsler learned, with one Jewish parent and an upbringing in which Judaism “wasn’t something that was completely ingrained in our lives,” the 31-year-old Arizona native said in his pronounced Texas twang.

Both have settled in quickly in Detroit, helping to lift the Tigers to the best record in Major League Baseball as of last weekend. Batting leadoff, Kinsler carries a .300 average and stands among the American League leaders in runs and hits.

“Here’s a team that had Hank Greenberg, and now it’s gone back to its Jewish roots,” he said.

Kinsler wears uniform no. 3; the 5 he wore for Texas had been retired by Detroit to honor Greenberg, its Hall of Fame first baseman from 1930 to 1946.

A uniform-always-dirty player, Kinsler draws ire from opponents and admiration from teammates. He’s a welcome spark plug for a team that has ridden power hitting and dominant starting pitching to three consecutive A.L. Championship Series and the 2012 World Series.

In eight seasons with the Rangers, Kinsler was a three-time All-Star who helped the Western Division club reach the World Series in 2010 and 2011. In postseason play, his average is .311.

His Nov. 20 trade for first baseman Prince Fielder “was a little bit shocking,” he acknowledged while dressing for a recent game here. But playing for Detroit “is awesome,” he added.

Ausmus was hired two weeks before the trade.

Sitting in his Camden Yards office, Ausmus said his experience with the Israeli team provided “a little bit of a glimpse” into how managers build rapport with players and cultivate clubhouse camaraderie.

“In terms of preparation, I don’t know that there’s a ton of parallel because there’s so much more information [available] on major league players than there is on WBC players – in fact, sometimes even no information on WBC players,” he said. “I guess that in some regards you learn to make decisions you don’t really want to make [to cut players].”

“There are only 30 managerial jobs. There’s no guarantee you’re going to get one of those,” he said. “I’d thought of it, but I never assumed it.”

A priority heading into 2014 was getting to know his Tigers as people and players. Six weeks into the season, Ausmus said, nothing has surprised him.

That could be because of his playing experience toiling for four teams, including the Tigers, in 18 years and winning three Gold Gloves at catcher, the thinking man’s position. Those parallels are more apparent, Ausmus said.

“As a catcher, you’re planning ahead, you’re strategizing, you’re dealing with a pitching staff. You also know what it’s like to be an everyday player,” he said. “As a catcher, it gives you a pretty good feel for what you would come across as a manager, for what the players are thinking, what’s going through their minds, what emotions they’re feeling.”

Given his short time with Team Israel, Ausmus figured he “certainly didn’t have any impact” on several players subsequently reaching the majors, but added, “I’m happy for them.”

That’s a sentiment the Tigers echo about working alongside Kinsler and Ausmus, at 45 a generation younger than his retired predecessor, the crusty Jim Leyland.

“It’s been a lot of fun to watch. I love the way he plays the game,” Verlander said. “I hated the way he played the game when he was with the Rangers and we had to play against him. That’s a sign of respect.”

“That’s the kind of player I want to be,” he said. “I like to cause problems. If you’re not noticed, then you’re not doing something right.”

Off the field, a synagogue in suburban Bloomfield Hills, Mich., has invited Kinsler to enroll his two children in its summer program. In Texas, Kinsler said, his daughter Rian attended a JCC of Dallas program.

Judaism is “definitely something I want to teach them about,” he said, adding that his wife, a Catholic, is supportive. “To have that knowledge is important.”