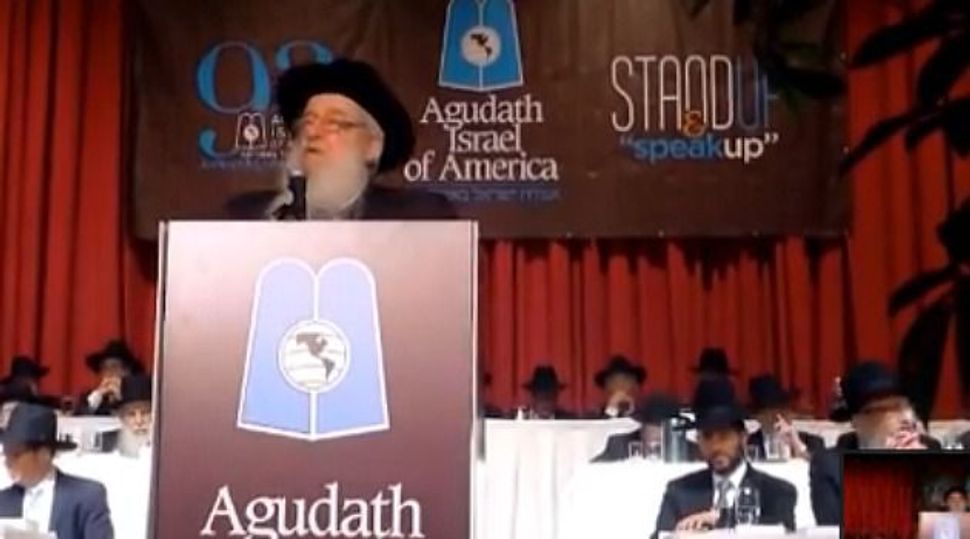 “The Torah must be guarded from the secular forces that seek to corrupt its values and the lives of [Jews], from intruders who sometimes in the name of Judaism completely subvert and destroy the eternal values of our people,” said Rabbi Yaakov Perlow, the Novominsker rebbe and the rabbinical head of Agudath Israel, at the May 27 dinner.

New York City Mayor Bill de Blasio, who spoke directly after Perlow, did not address his remarks. The mayor praised Agudath Israel, some of whose lay leaders were key backers in his mayoral campaign.

De Blasio said that the push for universal prekindergarten that has been a key achievement of his administration so far was conceived, in part, with the Orthodox community and Jewish schools, or yeshivot, in mind.

“From the very beginning I knew this would succeed for all of New York City if it was also something that succeeded for this community,” de Blasio said. “The yeshivot were such a crucial part of it. I knew if we did that so many children would benefit.”

At an event that read as both an assertion of ultra-Orthodox power and a call to vigilance, thousands of ultra-Orthodox Jews gathered at the Hilton Hotel in Midtown Manhattan to applaud their leaders and to show solidarity against perceived threats. The Hilton’s ballroom was a sea of black hats and black suits.

Perlow’s speech, the evening’s most fiery, condemned non-Orthodox streams of Judaism and used particularly harsh language to condemn Open Orthodoxy, the movement led by Rabbi Avi Weiss and centered at Yeshiva Chovevei Torah in Riverdale that pushes for a greater role for women in Jewish ritual, among other things. Perlow criticized the Israeli Chief Rabbinate for not being harsh enough in their treatment of Open Orthodoxy.

Perlow said that the threat posed by the Conservative and Reform movements had largely passed. “They’ve become oblivious, and they’ve fallen into the pit of intermarriage and assimilation,” he said. “They have no future, they almost have no present.”

Yet he warned of the danger to the ultra-Orthodox posed by Open Orthodoxy. Perlow said that Open Orthodoxy is “steeped in apikorsos,” or heresy.

“There’s a grave danger out there…outside New York City, that positions of leadership amongst Orthodox Jews is being taken over by people who have completely deviated from [the preservation of holiness.]” Perlow said that Isareli Chief Rabbinate is “not sensitive this,” and called on the Modern Orthodox to “stand up and reject these new deviationists, cloaking themselves in the mantle of Orthodoxy.”

One Jewish leader who attended the gala and was not ultra-Orthodox criticized the remarks.

“The comments were absolutely appalling and divisive, and really have no place in Jewish communal life,” he said. “This guy is basically saying that 95% of Jews aren’t Jewish.”

Avi Shafran, a spokesman for Agudath Israel, disputed the leader’s characterization of Perlow’s speech. “It was not the Jewishness of any Jews that Rabbi Perlow questioned, but rather the Jewish legitimacy of heterodox theologies,” Shafran wrote in an email. “He was simply acting as a religious whistle-blower — out of deep concern, not God-forbid, disdain, for innocent Jews.”

De Blasio, who spoke immediately after Perlow, appeared without a yarmulke. He praised Agudath Israel, greeting some of its leaders by name, including Rabbi David Zweibel, the group’s executive vice president.

“In City Hall we consider it our obligation to work closely with the community,” de Blasio said, referring the city’s Orthodox Jews. “It’s natural to us.”

De Blasio said that the universal pre-k program, the key initiative of the early months of his tenure, had been intended, in part, to benefit the ultra-Orthodox community. “Now our pre-k program is going to have a strong yeshiva program, and I am proud of that fact,” de Blasio said

De Blasio did not address questions about his administration’s enforcement of Bloomberg-era regulation of metzitzah b’peh, the controversial ritual involving direct contact between a mohel’s lips and the child’s circumcised penis.

Agudath Israel opposes a current city regulation that requires parents to sign a consent form acknowledging that they are aware of the risk of transmission of herpes that the procedure entails. The de Blasio administration has refused to say how many consent forms have been submitted, or what enforcement action has been taken.

Echoing previous remarks made at an AIPAC event at the same venue in January, de Blasio again suggested that defending the state of Israel is part of his job as New York City mayor.

“Vigilance is called for in defense of someplace we love deeply, which is the state of Israel,” de Blasio said. “And one of the great honors I have is to be the mayor of the city on this earth with the largest Jewish population. It is a true honor, and it comes with an obligation to protect that population here, but it also gives me an instantaneous link to the state of Israel, a link that’s been furthered by my visits there, and a sense that it’s part of what I do to defend the state of Israel.”

The comments may not have gone over as well as at AIPAC. Just before de Blasio spoke, Perlow had criticized the Isareli government’s effort to draft yeshiva students, a law bitterly opposed by Agudath Israel, which is theologically non-Zionist.

In a final gesture, de Blasio ended his address with a quote from Rabbi Nachman of Breslov, a Hasidic sage born in 1772.

De Blasio wasn’t the only political figure at the Hilton looking to court the powerful ultra-Orthodox gathering. Rob Astorino, the Westchetser County Executive and the New York State Republican gubernatorial hopeful, was circulating during the cocktail hour, shepherded by an Orthodox aide. “It’s one of the organizations that’s a must to stop in,” Astorino told the Forward. “I had a lot of support in the Orthodox community in Westchester.”

Astorino was promoting his support for the Education Investment Tax Credit, a proposed New York State tax incentive for donations to public and private schools that is supported by Agudath Israel. “It can pass,” Astorino said. “The governor’s got to be the one to get that done.”

Dignitaries were seated on a three-tiered riser at the front of the room. The bottom level of the riser was nearly as wide as the hall itself; the top two were narrower, the seating arrangements no doubt conveyed deep internal political significance.

Men and women were seated in separate halves of the Hilton’s ballroom. The women’s tables were separated from the men’s and the podium by a barricade formed by leafy green potted plants on long tables.

Rabbi Shmuel Kamenetsky, a leading ultra-Orthodox rabbi based in Philadelphia, announced a new Agudath Israel program to encourage young boys to study the Mishnah, a foundational book of Jewish law that makes up part of the Talmud. Called “One Mishnah, Together,” the program appears to be modeled on the Siyyum Hashas, which coordinates the study of the Talmud on a seven-year cycle.

Honorees including Alexander Rapaport, executive director of the Boro Park soup kitchen Masbia, and Rubin Schron, the event’s guest of honor, a reclusive New York City developer whose vast Manhattan holdings include the Woolworth building and the building where Agudath Israel’s offices are located.