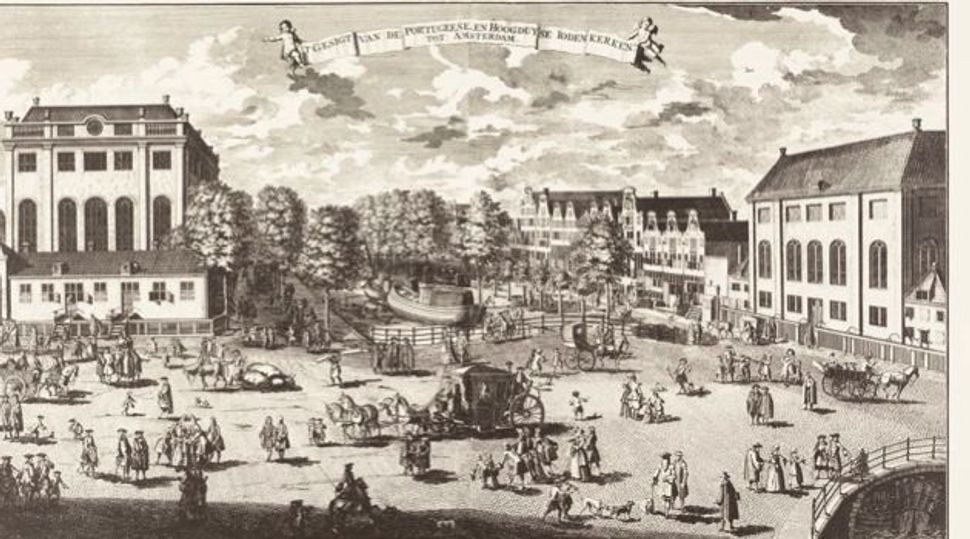 On Tour: The da Costas visited the Portuguese Synagogue of Amsterdam, the far left building in this 18th century print. Image by Wikimedia Commons

The scene was that of a typical family gathering at an Amsterdam restaurant in April. Children squatted on their chairs to reach the table, cuddling up to their grandmother, dishes were passed and toasts were made; a pair of sisters talked about old times.

Yet this was no typical family. The da Costas are descendants of four Portuguese Jewish brothers who, with their mother, fled the Inquisition in Portugal in 1614 and made their way to Amsterdam in order to live openly as Jews. The dinner culminated a full day of activities to commemorate that event.

The reunion brought together 55 family members, ranging in age from 4 to 70. And yet, ironically, very few of the da Costas who gathered there — coming from all over the Netherlands and Suriname, the former Dutch colony in South America — were Jewish themselves.

Many of their ancestors converted to Christianity over the years, or simply stopped practicing Judaism. As one participant, Joost da Costa, a retired pediatrician, said the familly’s relationship to Judaism “has to do with the guarding of our history… It is a kind of feeling of where you come from, where you belong.”

The commemoration was the brainchild of Marina da Costa, an animated Surinamese Jewish woman who has become a passionate researcher of her family’s history. She leads tours of Jodensavanne, the 17th-century Jewish plantation settlement now in ruins, 35 miles down the Suriname River from Paramaribo, Suriname’s capital city.

Marina da Costa worked for over a year with another distant relative to organize the event, reaching out to family members neither had met. She described the experience as transformative. At the reunion, she said, “you saw people who you know exist but you have never seen them.”

The da Costas trace their roots to four brothers: Abraham, Uriel, Joseph and Mordecai, who, with their mother, left Portugal after living as New Christians — Jews forcibly converted to Catholicism by the Portuguese King, Manuel I, in 1497, five years after the start of the Spanish Inquisition. Many Portuguese Jews publicly practiced Catholicism but continued to live as conversos, or secret Jews, and fled, like the da Costas, when they could. Others eventually became true Catholics.

The da Costa reunion began at the Jewish Historical Museum, where Joost da Costa spoke about two key figures in the da Costa family tree: Uriel da Costa and Isaac da Costa. Uriel, one of the four original brothers, convinced his siblings to return to Judaism, which galvanized the family to leave Portugal.

Once in Amsterdam, however, he began to question rabbinic authority and later the immortality of the soul, publishing his views in a book. He was excommunicated from the Sephardic synagogue and fled to Hamburg, Germany. He later returned, but was excommunicated again for questioning other Jewish teachings, such as the idea that Moses was given the 10 commandments directly from God.

He eventually recanted, but as punishment for his heretical views, he was forced to lie on the path leading into the synagogue as congregants walked over him. He later took his own life. Over the centuries, Uriel came to be seen as an early free thinker, and by the 19th century had become a central character in several Yiddish theater plays and an operetta. (Two weeks before the reunion, in New York City, Uriel was the subject of a wild, avant-garde production of a new play, “Uriel Acosta: I Want That Man!” with three actors — one a woman — portraying the central character. It also included puppets, projections, artificial smoke and music.)

Joost da Costa also spoke about Isaac da Costa, his great-great-grandfather, a romantic poet and writer, who eventually converted to the Protestant Dutch Reform Church. There were many 19th-century Jews who converted, such as the father of German composer Felix Mendelssohn.

“He followed the stream,” said Joost da Costa of his ancestor. “It was the flow of the time.”

Yet Joost da Costa and his family maintain an interest in their Jewish past. In the 1960s, his father, a minister, took the family to Portugal on two different occasions to visit the street where the da Costa house once stood. Joost da Costa himself has been researching the family genealogy since his retirement from medicine five years ago. He has also investigated the life of Joseph da Costa, one of the other original brothers, who lived for several years in New Amsterdam on the southern tip of Manhattan, battling the anti-Semitic Governor Peter Stuyvesant.

Da Costa, a merchant who was a shareholder in the Dutch West India Company, was involved in a number of petitions to the company to grant Jews rights, such as the ability to trade and purchase property. Joseph da Costa eventually returned to Amsterdam and is buried in a Jewish cemetery there.

At the Amsterdam reunion, the extended da Costa family toured the Portuguese Synagogue, also known as the Esnoga, the magnificent house of worship lit by over 1,000 candles in brass chandeliers. The synagogue, which opened in 1675, has a rosewood ark that rises over 26 feet high against one wall.

The floor is covered with sand; some say that this is a remembrance of the exodus from Egypt, while others say it is a throwback to the converso era, when secret Jewish worshippers wanted to muffle the sound of their feet. Since it was the day before Passover, the synagogue had been swept clean of sand.

The group then walked to the Kirchner Bookstore, owned by another da Costa descendant, Frederick Lobbrecht, for drinks and canapés. Overlooking a canal, the bookstore was a treasure trove of books on politics, philosophy, anthropology and religion that could only be found in a European capital like Amsterdam. A large poster for Baruch Spinoza’s “Ethics” featuring the philosopher’s portrait looked down from a wall. The store is around the corner from the Anne Frank House, where every day, rain or shine, a long line of people wait to get in.

For dinner, the group converged upstairs in at Haesje Claes, an old-style Dutch restaurant where the extended family got to know each other and ended the day. Mixed among the toasts were exclamations of “L’chaim” and “Mazel tov.”

For Marina da Costa, the reunion was one component of her own return to Judaism. She is the daughter of a Dutch Jewish father and a Christian mother. Her father fought in the resistance movement during World War II and lost his sister, brother-in-law, and their two children in Auschwitz.

The experience caused him to lose his faith, as he questioned the existence of a God who would allow the mass killing of Jews. Neither Marina nor her siblings were raised Jewish. When at 18 she told her father that she wanted to return to his religion, he balked.

“Oh, my girl, what are you doing now? I was the one who made you not Jewish and now you’re going back,” Marina da Costa recounted. “I think you will be the first one they will catch.”

Marina da Costa’s mother, on the other hand, was more interested in the family’s Jewish heritage. Though not Jewish herself, Irini da Costa was fascinated by Sephardic Jewish history in Suriname and spent time in the Dutch archives, photocopying letters, birth records, marriage licenses, death certificates, bills of sale, ships manifests and other public records. She even combed the phone book for da Costas, which led to meeting with the distant relative, Lousje da Costa, with whom Marina organized the reunion. In 1973, Irini da Costa founded the Jodensavanne Foundation to help restore the remains of the synagogue of the initial Jewish settlement, long ago swallowed up by jungle.

Marina da Costa eventually did convert. She first pursued conversion in an Orthodox synagogue with her then-husband, a non-Jew, and their four children. But her young daughter’s battle with childhood leukemia arrested the process. After her daughter’s death and her divorce, she and her children completed their conversion through a liberal synagogue.

After living in the Netherlands for 30 years, Marina da Costa is back in Suriname starting a tour company focusing on Jewish sites there. She is also working on a 375th anniversary celebration of the Surinamese Jewish community scheduled for October 2014.

The event will unveil a monument to the 108 Surinamese Jews who died in Europe during World War II, and will also bring together people from the various ethnic groups in Suriname — Maroons (descendants of slaves), Creoles, Chinese, Indonesians, Indians, and of course, Jews — for concerts.

Marina da Costa’s interest in Judaism was born out of her family’s history, she said, but it’s also something more.

“When I read about Uriel da Costa or when I think of Baruch da Costa, the cantor at Jodensavanne, and some of the da Costa women, it’s all part of my family,” she said. “It’s not the rules that make you Jewish, it’s neshama, your soul. It’s being connected to the universe.”

Jessica Siegel is a freelance journalist who writes about a variety of issues from arts to education. She is working on a book about the history of the Jews in Suriname and the Caribbean.