Hungary Jews Unify Around Fight With Government Over Holocaust Whitewash 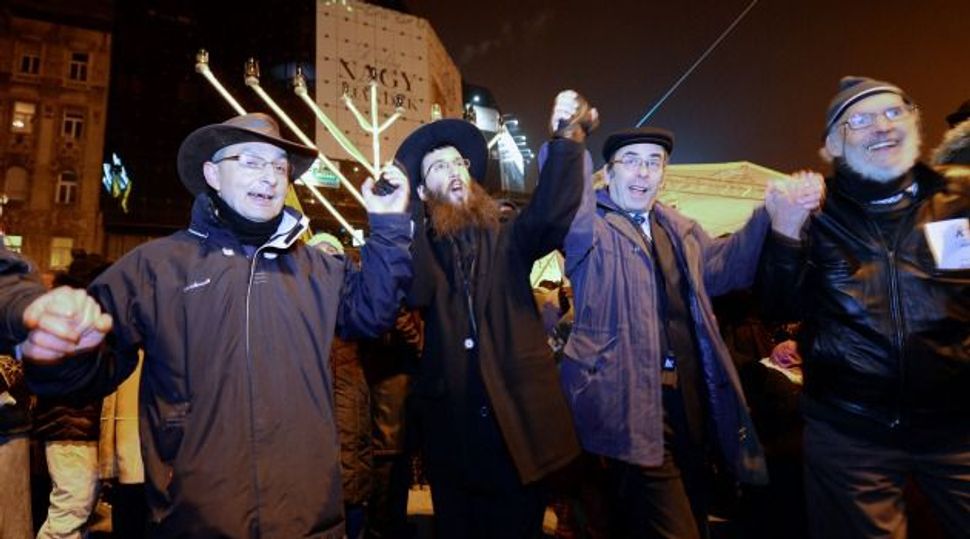 Come Together: After boycotting a $1 million grant for Holocaust commemorations, Hungary’s Jews have launched their own fundraising alliance. Image by Getty Images

(JTA) — It isn’t every day that Jewish organizations reject funding for Holocaust commemorations.

But that’s what happened in Hungary this spring when Jewish groups refused nearly $1 million in special state grants to protest what they see as the government’s whitewashing of Hungarian complicity in the Holocaust.

“We wanted to send a very strong message to the government that we are interested in truthful, not symbolic, remembrance, and this is something money cannot buy,” said Andras Heisler, the president of the Federation of Hungarian Jewish Communities, known as Mazsihisz.

Now a group of Jewish communities and cultural organizations are uniting in an effort that organizers say is unprecedented for Jewish groups in Hungary. They banded together into a fund-raising alliance, called Memento70, that is using crowdsourcing and social media in a bid to raise money on their own for their now unfunded projects.

The campaign went live in April, the 70th anniversary of the Nazi ghettoization of Hungarian Jews. The launch coincided with the official start of a special year of Holocaust memorial observances organized by the state but boycotted by much of the organized Hungarian Jewish community.

These are bold moves for a Hungarian Jewish community that remains highly dependent upon government funding. But the activist stance reflects potentially broader changes for Hungary’s Jewish community, which numbers as many as 100,000, most of whom are unaffiliated with the official communal bodies.

Heisler took the helm of Mazsihisz in 2013 and has outlined an agenda aimed at making the umbrella group a more respected, pluralistic representative body that can credibly lobby for Jewish interests at a time of growing nationalism and open xenophobia and anti-Semitism.

“We are not afraid,” Heisler said. “On the contrary, the Jewish community is reacting and finding itself. It feels alive.”

Mazsihisz is largely financed by the state’s funding of religious organizations and Holocaust compensation funds. The Memento70 boycott deals only with the Hungarian government’s special Holocaust commemoration grants.

In February, Mazsihisz had decided to boycott the government’s Holocaust year events because of three specific issues that it said played down Hungarian involvement in the Holocaust.

The umbrella group objected to a planned memorial in Budapest to the 1944 German occupation that critics feel portrays Hungarians solely as victims of the Nazis. Mazsihisz was upset as well by the government’s refusal to share plans for a new state-sponsored Holocaust museum or to involve organized Jewry in developing its exhibition.

Also, the Jewish community had demanded the resignation of the director of a government-sponsored research institute who in January had referred to the 1941 deportation to Nazi-controlled territory of thousands of Jews who sought refuge in Hungary as “a police action against aliens.”

The government has not acceded to the Jewish community’s demands despite almost daily protests at the downtown Budapest site where the monument to the German occupation is being built. Protestors have left Holocaust memorabilia, written messages and other material spread out on a wide strip of sidewalk across the street.

Last week, Hungarian Prime Minister Viktor Orban rejected a call by 30 Jewish U.S. members of Congress to reconsider constructing the monument “against the wishes of the Hungarian Jewish community.”

It “is not a Holocaust memorial,” Orban said in a statement, but “a freedom-fighting people’s memorial of the pain of having its liberty crushed.”

In general elections in April, Orban’s center-right Fidesz party was re-elected, but one in five voters cast their ballots for the extreme right Jobbik party, notorious for its nationalist, anti-Roma policies and anti-Semitic rhetoric.

In May, Fidesz won more than 51 percent of the vote in elections for the European Parliament, with Jobbik finished second with nearly 15 percent. A recent Anti-Defamation League survey found that 41 percent of Hungarians hold anti-Semitic attitudes.

Still, Heisler suggested, the greatest challenges he faces are not related to the national political situation.

“My biggest problem is not Orban or Jobbik but reorganizing Mazsihisz and dealing with the weakness of the organization,” he said.

As the main Jewish umbrella group, Mazsihisz officially represents the interests of Hungarian Jewry to the government and is responsible for the annual distribution of millions of dollars of government subventions and Holocaust compensation funds to Jewish organizations.

Critics have long accused the group of being undemocratic and unrepresentative, and called for a reform of its financial and administrative operations.

“The level of mistrust of Mazsihisz is high,” Heisler said. “We have to change this.”

Heisler said a recent operational review showed large-scale flaws in in the management of the organization, which employs nearly 1,000 people, and an economic audit revealed “very serious problems.”

He acknowledged, too, that he faced opposition in his hopes to “open the umbrella wider” to allow Hungary’s small Reform Jewish congregations, which are not recognized by Mazsihisz, to join.

“Mazsihisz is a big organization with huge infrastructure,” he said. “If these changes can’t be made, we are on a slippery slope.”

Most of Memento70’s 35 member groups are Jewish community or cultural groups that come under the Mazsihisz umbrella. They include most of the mainstream Jewish organizations that had won the government’s Holocaust commemoration grants.

The Memento70 campaign is raising money for projects including the construction of Holocaust memorials, cleaning up Jewish cemeteries, book publications, educational initiatives, and commemorative performances, exhibitions and concerts.

Many of the donations, Memento70 spokeswoman Antonia Szenthe noted, had come from donors with limited means who simply wanted to show support.

“A poor Roma community in a village got together and sent us the equivalent of $25,” she said. “It’s not much money, but it really meant something.”

While the campaign is still far short of its fundraising goals, Szenthe cast the effort in a positive light.

“There has never before been a fundraising alliance like this,” she said. “It is a very new thing. Fundraising as such has never happened here. Begging, yes. But not fundraising.”

Hungary Jews Unify Around Fight With Government Over Holocaust Whitewash