Why Would Yeshivas Reject Pre-K Program Designed for Them? 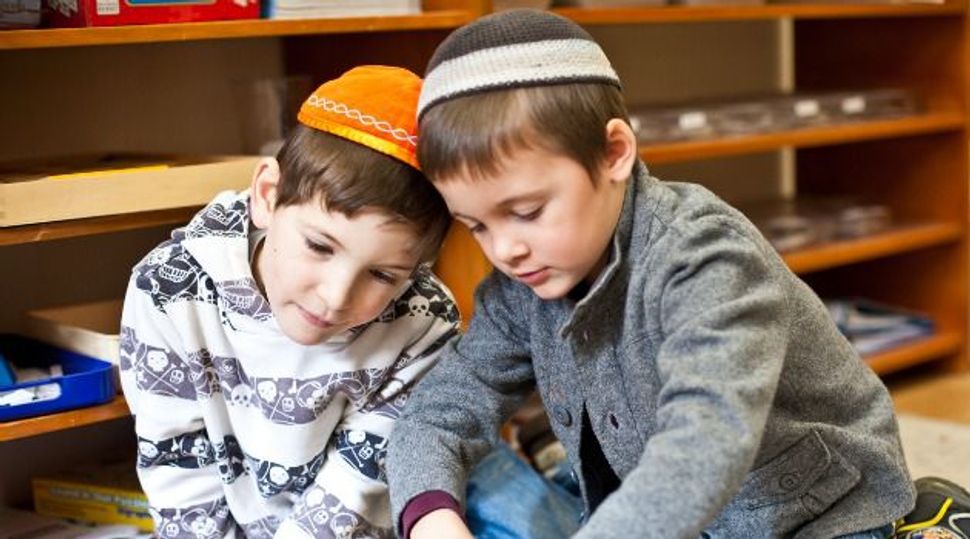 Orthodox yeshivas are poised to opt out of the largest free universal prekindergarten program in the country, one that New York City Mayor Bill de Blasio says he created with them in mind.

Despite months of talks between New York City officials and Orthodox leaders, activists say that they now don’t expect many yeshivas to participate in the program. That would be a blow to de Blasio, whose administration is seeking to find 50,000 full-day pre-K seats in public and nonpublic schools by the start of the school year.

In a speech at the ultra-Orthodox umbrella group Agudath Israel of America’s annual dinner May 27, de Blasio said he had designed the full-day pre-K program in part so the yeshivas could opt in, and that he was happy with levels of Orthodox participation so far.

Yet activists from across the Orthodox spectrum say city regulations may make it impossible for them to participate. The six hour and 20 minute school day required by the city program, an hour and 20 minutes more than state regulations require, will make it impossible to fit in religious instruction outside city-funded hours, the activists say. And some argue that the limits on religious activities laid out by the city could be unacceptable.

“This is a disingenuous way of including us,” said Maury Litwack, director of state political affairs and outreach for the Orthodox Union’s Advocacy Center, the political arm of the large Modern Orthodox umbrella group. Litwack said that the O.U. had supported the universal pre-K program and is backing similar efforts in other states. In New York City, however, it’s not working out for the O.U. “The devil is in the details. And I think the excitement of a UPK program — and we were excited — has waned,” Litwack said.

Agudath Israel of America has not taken a position on the program, but the group’s executive director, Rabbi David Zwiebel, said that schools have expressed skepticism. “Some schools are saying that they think they can live with this, but many are saying that they can’t,” Zwiebel said. “There’s a possibility that, when schools study this carefully and run it by their religious leadership, they will get back to the mayor… and say we can’t live with this.”

De Blasio was backed by a number of Orthodox groups in the 2013 mayoral election, including one half of the large Satmar community and some leaders of the Agudah. A former City Council member whose district included the heavily Orthodox Brooklyn neighborhood of Boro Park, de Blasio has pitched himself as a friend of the Orthodox.

Those ties now seem strained. Months of meetings between Orthodox leaders and representatives of the mayor have so far failed to draw Orthodox commitments into what the mayor has touted as his signature program.

The new state-funded program joins a raft of early childhood offerings already available in New York City, including part-day prekindergarten and Head Start programs. The new full-day pre-K is meant to increase the number of public school pre-K classes and to provide millions of public dollars for classes at so-called community-based organizations, including religious institutions.

Orthodox yeshivas in New York City already take government funding for running other early childhood education programs. The full-day universal pre-K funding, however, could vastly increase the public money going to Orthodox educational institutions. The city will pay schools $10,000 per student for a school year, or $7,000 if their teacher does not have a teaching degree. New York State has allocated $300 million to the program in New York City alone.

The rules offer leeway for religious topics to be introduced in a cultural context. Schools are allowed to conduct classes in languages other than English and to give preference in the hiring process to members of their own religion and even their own religious denomination.

Nevertheless, Zwiebel said that the regulations would pose problems for some ultra-Orthodox schools. The ban on staff-led blessings, he said, was particularly serious. The traditional blessing after a meal is long and complex, Zwiebel said, and 4-year-olds might not be able to recite it on their own.

Zwiebel also raised concerns about the allowance for teaching religious texts in a secular context. “One of the messages I hope my children would get [is] that the biblical texts are holy. Does that cross the line?” he asked.

The mayor said at a press conference June 5 that he planned to strictly enforce the rules on religion-state separation and that the city’s Department of Education had hired new staff expressly for that purpose. “If a program is found out of compliance in any serious way, they won’t be allowed to continue thereafter to receive the opportunity,” the mayor said. “It’s just a constant cycling through, checking on the situation in each school, and I think if there were anything wrong, we would be able to pick it up pretty quickly.”

Zwiebel said that he planned to circulate the mayor’s warning to yeshiva principals. “They should be aware that this isn’t a game,” he said.

The school day length requirement, meanwhile, remains a major concern for both the O.U. and the Agudah.

A six-hour-and-20-minute school day, as required by the city, would start at 8 a.m. and end at 2:20 p.m. Orthodox day schools, however, often close earlier Fridays for the Sabbath. Distributing that extra time throughout the rest of the week and adding on an extra hour at the beginning or the end of the day for religious instruction would necessitate eight- or nine-hour days from Monday through Thursday, according to Jeff Leb, the O.U. Advocacy Center’s New York State Director of Political Affairs.

“Most school administrators agree that that would be too long for a 4-year-old to stay in school,” Leb said.

The city’s guidance for religious schools does allow universal pre-K’s to hold city-funded classes on Sundays, a concession that appears to have been made in an effort to address the hours problem. Many ultra-Orthodox schools in Boro Park and Williamsburg stay open Sundays. But the gesture has not mollified the Orthodox activists.

Both the O.U. and the Agudah officials pointed to regulations issued by the New York State Education Department for universal prekindergarten classes it will fund at community-based organizations outside New York City under its version of the same program. Those rules require only five hours of classes. Those five hours don’t include naptime or meals, while the city’s six hours and 20 minutes do. The state has not issued specific regulations for religious schools that take state money for universal pre-K, but Leb said that his group’s understanding is that, under the state’s regulations, staff could lead blessings at lunch.

Zwiebel said that Agudath Israel was looking into whether Jewish schools located in New York City could apply directly to the state for universal pre-K funding, bypassing the city’s regulations and falling directly under the state’s. According to NYSED documents, that would be possible only if the individual schools had already been turned down for funding by the city.

The city, for its part, maintains that the six hour and 20 minutes of instruction is necessary to maintain consistency between the community-based organizations providing universal pre-K seats and the public schools. A city official, speaking on background, said that the city’s goal was to provide similar services across the city and to help 4-year-olds adjust to a full school day.

In early June, the city released a directory of community-based groups contracted to provide classes through the program starting in September. Orthodox groups on the list appeared to primarily be signed up to provide half-day classes, which require fewer hours of instruction and offer less money to the schools.

Another round of applications for schools will be due July 7. Zwiebel said that he is encouraging yeshivas to apply, even if they choose to withdraw their applications later. The applications remain a hot issue in Orthodox circles, as schools choose whether to apply and to hope for last-minute rule changes from the city.

Why Would Yeshivas Reject Pre-K Program Designed for Them?