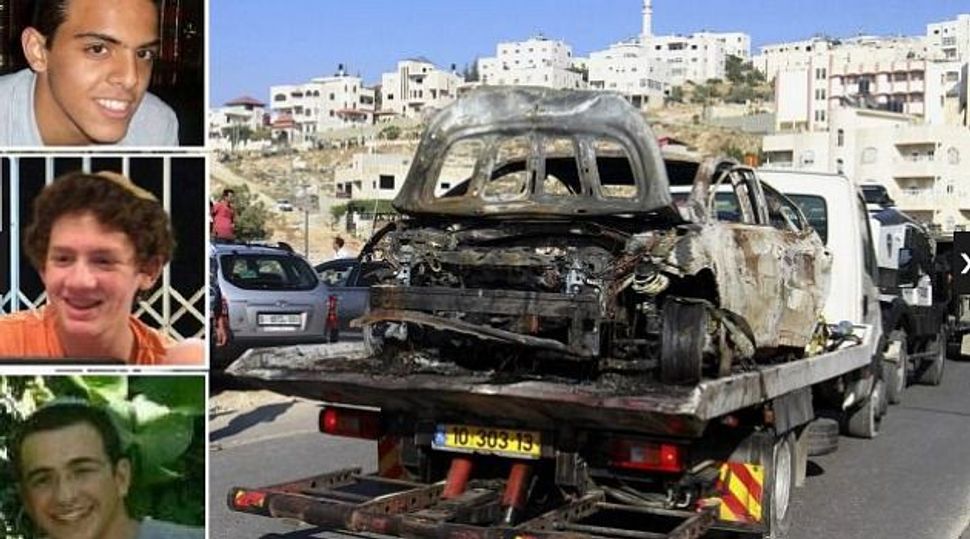 Faces of Anguish: The three kidnapped Israeli teenagers were identified as Eyal Yifrah, 19, Gil-Ad Shaer, 16, from Talmon and Naftali Frenkel, 16. Image by haaretz

“Our boys were kidnapped by a terrorist organization,” Netanyahu said in a terse televised statement.

The premier said the unity deal between Fatah and Hamas led to the kidnap, without elaborating.

Security sources said a well-organized group snatched the teens, and that they are believed to be still alive. The terrorists might try to spirit the teens over the border in Jordan, the sources said.

Israel rounded up Palestinians for questioning and poured in troop as it stepped up an increasingly desperate search for the three teenagers.

The disappearance of the three on Thursday as they hitched a ride from a Jewish settlement where they were studying prompted house-to-house searches, round-ups and interrogations in the nearby Palestinian city of Hebron and outlying villages.

The teens were identified as Eyal Yifrah, 19, from Elad, Gil-Ad Shaer, 16, from Talmon and Naftali Frenkel, 16, from Nof Ayalon, Haaretz reported.

It is also a test for ties between Israel and Palestinian President Mahmoud Abbas, which were frayed by his power-sharing deal in April with Hamas Islamists hostile to the Jewish state.

Abbas drew an angry response from Hamas, however, by helping Israel’s dragnet on Saturday.

Israeli soldiers arrested at least 12 Hebron area residents, including two women, according to Palestinian officials. Locals said some of those detained were involved in car businesses like repair garages – indicating that the investigation was focusing on tracking down potential means of transport for a kidnapping.

Palestinian witnesses said the troops were also confiscating video from privately owned security cameras in Hebron and had prevented around 300 residents from leaving the area.

A military source said Israel was working on the assumption that the three teenagers were abducted by Palestinians and that it had preliminary information as to the captors’ identities, though the condition of the missing teenagers was unknown.

“We can’t confirm if they are alive or dead. We don’t know at this time,” the source said.

To escalate the searches, Israel was bringing a “significant” number of fresh forces to the Hebron area, including a paratrooper brigade, the military source said.

“We need more boots on the ground to deal with this serious development. We need to be able to track them down, we need to use all of the capabilities at our hands in order to bring this to a quick end.”

A Palestinian security source said Abbas’s forces were helping Israel in the search. That drew condemnation from Hamas – though the Islamist faction has not itself claimed involvement in the disappearance of the Israelis.

“Security coordination between (Prime Minister Rami) Hamdallah’s and Abbas’s security services and the enemy to locate the heroes of the Hebron operation and arrest them is a stigma,” said Hamas spokesman Fawzi Barhoum.

Palestinian militants have said in the past that they want to kidnap Israelis to win concessions from the Israeli government. More than 1,000 Palestinian prisoners were freed in 2011 in return for the release of an Israeli soldier held captive in the nearby Gaza Strip for more than five years.

A statement posted on Arabic social media on Friday said a Palestinian wing of the Iraq- and Syria-based Islamist militant group ISIL had seized the Israelis. The statement did not appear on regular ISIL websites, raising doubts as to its authenticity.

Hebron is a Hamas stronghold whose militants have at times eluded Israeli crackdowns. An Israeli soldier was killed while patrolling the city last September. The army described that as an attack by a Palestinian sniper who has yet to be captured.

Last November, Israeli forces killed three al Qaeda-aligned Palestinians near Hebron. Their group, the Majles Shura al-Mujahideen, or Holy Warriors’ Assembly, said in a subsequent statement that it was gaining ground in the West Bank.

Israeli Prime Minister Benjamin Netanyahu said he would hold Abbas’s administration responsible for the fate of the missing three, whose names have been withheld by Israeli authorities. Two of them were aged 16 and the third 19, according to media reports.

Defense Minister Moshe Yaalon told reporters that Israel had foiled 14 attempts by Palestinians to abduct Israelis this year, adding: “It seems that this event got in under our radar.”

Netanyahu called off U.S.-brokered peace talks with Abbas over his reconciliation with Hamas, which controls the Gaza Strip and has waged occasional shelling wars against Israel.

One of the three missing Israelis is a dual U.S. citizen, a person briefed on the investigation told Reuters. On Friday, the U.S. State Department said that, at its urging, Abbas was “working closely together” with Israel in the search.