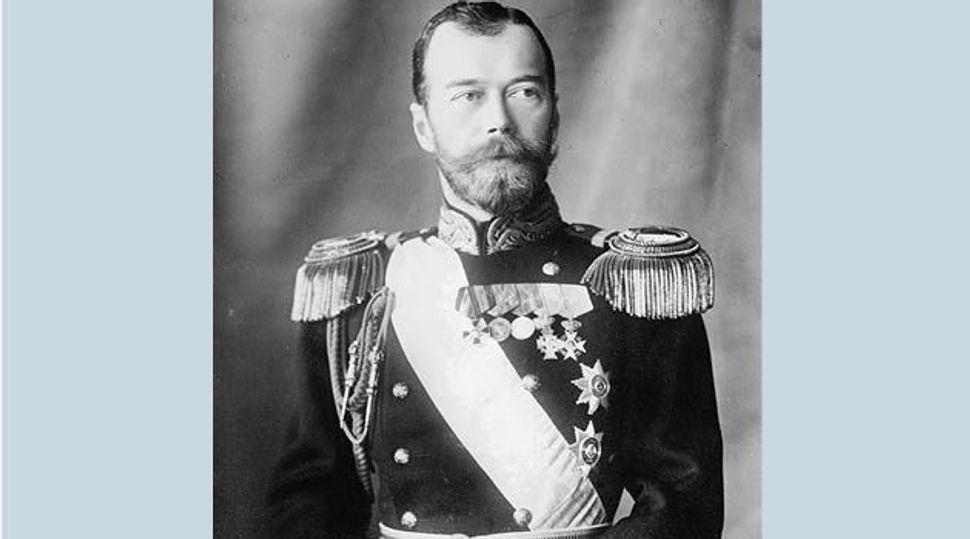 This letter was received by one of our readers, Mr. Pinkus. The letter was written in Russian and translated by B. Kovner into Galician Yiddish.

Here is the letter:

Dear and very beloved editor of the Forverts!

As I have heard that you are a kind soul with a soft heart, and that you rescue all unfortunate, oppressed and suffering people, I would like to request of you to also have pity on me and help me with some advice. Listen with good sense and lament over my troubles:

I am a man of 48, born in Russia, in a big city. I stem from a very wealthy family of noble descent. My grandfathers, great-fathers, and my father, may he rest in peace, were all emperors, meaning, rulers. When my god forsaken father died I inherited his crown and served as emperor czar for 23 years.

And I ruled not badly. And yes, I forgot to say that I am married and have a wife and five children, one son and four daughters.

In short, I ruled over my country as it should be. I had a good name and whatever I decreed was immediately enacted. When I said, “Pogroms on Jews!” a pogrom immediately materialized as was their want! With slit bellies, bashed in heads and dead children still in their mothers’ wombs.

True pogromelekh — right on the mark!

As soon as I enunciated, “Drive out the Jews!’ all roads and vessels filled up with banished zhides.

When I uttered, “Hang the revolutionaries!” gallows sprang up like mushrooms after a rainstorm!…

And those we didn’t have time to hang were sent to our Siberian wastelands or, just simply, killed.

That is the kind of power I possessed.

Now listen to my great misfortune:

A few weeks ago a few of my friends approached me with a document in hand requesting I sign it.

—Nothing, they replied, “You will no longer be an emperor! No more czar! no more ruler! No more pogromtshik! You will be dethroned and go with your head in the ground!”

Blackness descended over me and I began to resist not wanting to sign. I realized the story smelled of trouble.

But suddenly soldiers appeared with guns and a troop of revolutionaries, socialists… and I had no choice… I had to pathetically sign the document — my death sentence.

Woe is to me and my life!

Dear editor, I write you this letter with pain in my heart. I feel so tormented I can’t even express myself, my heart is so plagued.

So I will now get to the point.

As you already know, I have been left to drown. No more czar, no more rights, no more freedom and no country to rule…

Meaning, I have no trade…

So I want to ask you a favor —please give my situation some thought, and give advice as to what to do — stay in Russia or go to America?

One way or the other, one is worse than the other. I do not relish staying in Russia. Everyone is laughing at me. They’re all making fun of me. I am simply ashamed of what others think of me.

I am worried for my wife and five little ones. What will happen to them?

So I am left with coming to America to try to get a job somewhere on a farm that raises pigs. Or maybe I should get a job like Mr. Selznick, the Jewish moving picture manager, or work for him in the moving pictures.

So then, I am attracted to America but I don’t know what to do. Give me advice. I am not asking anyone for money. I can still put enough together for a ship ticket.

So then, before I take this next step, I beseech you dear editor of the Forverts, to speedily respond with your advice. I will do whatever you say.

With regards, your fallen compatriot,

As of now Russia has become a free country and a free country is free for everyone except for czars and pogromtshikes. So then, we very much doubt the writer will be granted permission to ship out. If so he should come to America. But he must be able to read and write. If not, he will not be permitted entry to America because the immigration laws have become very strict. One must be a grammarian.

It is plausible that the writer will find a job here but not as a czar. That trade is not valid here. As he recounted above he has never made a living. But never mind! America is a country where anyone can make a living. You only have to want to. If he can’t make it in anything else he could always become an apparatchik in the Russian baths.