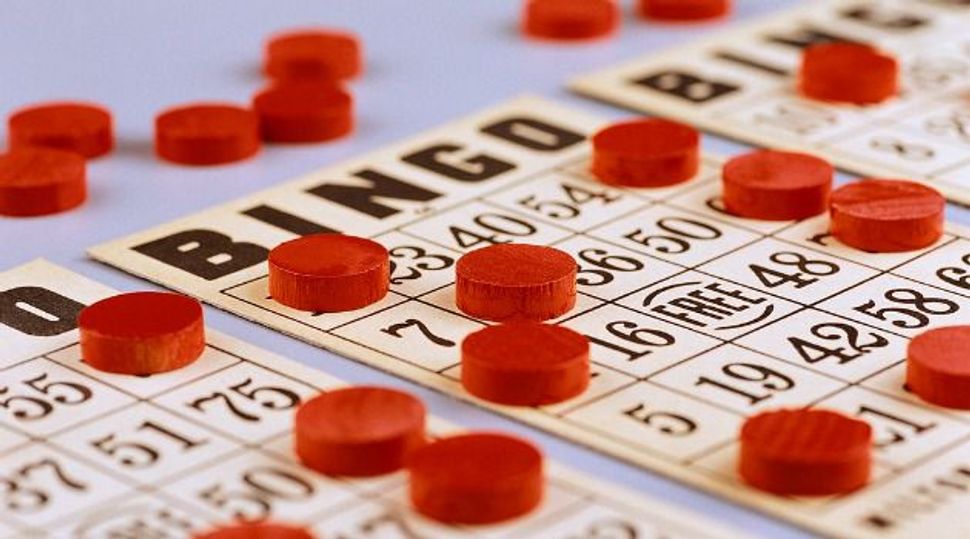 Wheel of Misfortune: Since the 2008 economic crisis, attendance at bingo games has gone down considerably. But Jewish charities are still keen to play.

Gamblers know that the house always wins — except, as some Jewish charities are learning the hard way, when it doesn’t.

Federal tax law and state gaming regulations allow some charities to play pit boss, taking bets on games like bingo and poker to fill their charitable coffers. But thanks in part to the economic downturn, a diverse group of Jewish charities has managed to actually lose money on what many had seen as a sure thing.

In some cases, charities have lost tens of thousands of donor dollars at the tables. The Forward identified the losers using our database of financial information on 3,600 Jewish charities.

Friends of the Israel Defense Forces reported losing $147,000 from gaming in 2011, according to tax returns they filed with the IRS. Also that year, a B’nai B’rith chapter in Midland, Texas, lost $45,000, Cincinnati Hebrew Day School lost $18,000 and Jewish Vocational Service of Los Angeles lost $16,000. 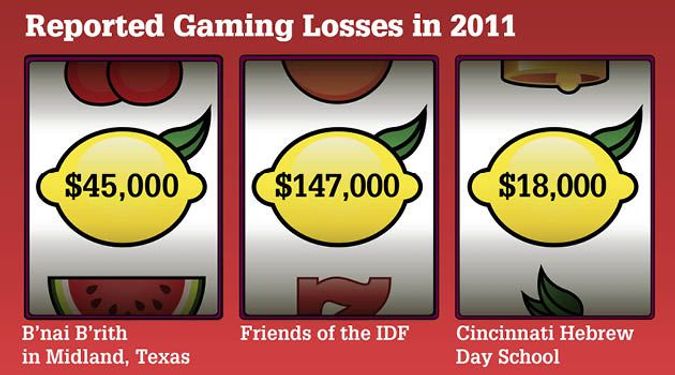 Empty Cards: Some Jewish charities reported gaming losses in their 2011 Form 990s filed with the IRS. Image by Kurt Hoffman

Other Jewish charities report churning millions in gambled cash while bringing in surprisingly small revenues. Two charities run by the same director in San Antonio, the Torah Learning Center and Vaad Hakashruth, reported in 2011 taking in a combined $2.3 million in gambling revenue but turning a profit of just $8,000.

Both the Cincinnati Hebrew Day School and JVS said that they no longer fundraise through gaming. A representative for B’nai Brith’s national organization said that the Midland chapter had made money through bingo in other years. The San Antonio charities blamed their small profit on low attendance at their bingo hall. And FIDF, in a statement, said that it had made money in 2012 and claimed that there was an error in its 2011 tax filings, though the organization declined to explain that error in depth and has not filed amended records with the IRS.

“Bingo is a national phenomenon that is declining in popularity and attendance, there’s no question,” said Charles Lessin, president of a charity called The Jerusalem Connection, which owns a bingo hall in Richmond, Virginia, called Pop’s Bingo World. Lessin said that since the economic crisis began in 2008, attendance at bingo games has been way down, and charities’ profits have been sliced in half. “The amount of people that come to the games has declined precipitously, as has the amount of money people spend,” Lessin said.

Lessin, a homebuilder, still raises a relatively large amount of money annually for The Jerusalem Connection through Pop’s. In the group’s 2012 tax returns, The Jerusalem Connection reported taking in $271,000 in net income on bingo and related games. The organization provides social services to Americans studying Judaism in Israel, among other charitable functions, according to its tax filings.

Located in a large warehouse-like building, Pop’s Bingo World has a snack bar, ATM machines and uniformed off-duty cops. There are 10 bingo sessions each week, according to Pop’s website, each lasting about three hours. Some are run by The Jerusalem Connection, others by other local charities that lease the space for regular games, like Rudlin Torah Academy, a local Jewish day school.

Doors open an hour and a half before the session starts. “It’s quite the social event,” Lessin said. “You’ll see a couple of news channels on over here, the soap operas over there.” Pop’s gives out copies of The Bingo Bugle, a national bingo newspaper. Volunteers from the beneficiary charities leasing the space run the bingo sessions. There are 30 individual bingo rounds per session, plus the opportunity to buy so-called pull tab bingo games, a version of scratch-off lotto that also benefits the charities.

The gaming income from Lessin’s group, though sizable, is a drop in the bucket compared to the take of the behemoth of Jewish charitable bingo, the Irving Moskowitz Foundation. Known for the millions it sends to support settlements in the Israeli-occupied West Bank and East Jerusalem, the California-based foundation reported $8.8 million in net gaming income in 2012. The foundation owns a massive bingo club in Hawaiian Gardens, California, that hosts games every night of the week.

Bingo works for Moskowitz and for Lessin, but when it stops working, the economics can be bad for charities. Unlike horse betting and casino poker, in which the pots are made up of the cash laid out by gamblers, bingo jackpots are fixed regardless of how many people show up to play. Even assuming high attendance, Lessin said, the games are designed to pay back 80% of the entrance fees in prizes. “That influx of prizes is what allows many of the players to come back over and over,” Lessin said.

That structure can turn dangerous when attendance drops. According to David Fisher, a former director of the Torah Learning Center of San Antonio and Vaad Hakashruth of San Antonio, and who continues to oversee both groups’ bingo programs, declining attendance has cut into his groups’ gambling profit margins.

Fisher’s groups have been hosting bingo games since 2002. They work with a San Antonio venue called Blanco Bingo, an establishment whose logo includes a bingo ball wearing a cowboy hat. The groups did well at their peak in 2006, with the Torah Learning Center reporting $109,000 in net gaming income on $1.2 million in gross gaming revenues and the Vaad Hakashruth reporting $90,000 in net income on $1.3 million in gross revenues.

But the profits collapsed in 2010. That year, Vaad reported a loss of $575 on gross gambling revenues of $1 million. In 2012, both groups pulled back sharply on their bingo operations, with just over $770,000 in combined gross gaming revenues and $17,000 in combined net gaming income.

“We just have to evaluate it based on how things go,” Fisher said.

Other groups have fared far worse than Fisher’s. In 2011, the B’nai B’rith chapter in Midland lost a third of its annual revenue at the bingo tables. The organization’s total revenue was just $135,000; it reported gaming losses of $45,000.

In an emailed statement, a representative for B’nai B’rith’s national organization defended the chapter, saying that bingo is an “important social outlet for a community” and that the chapter had done better in other years.

The Midland chapter’s bingo operation has raised questions before. A 2011 investigation in the Austin American-Statesman reported that the chapter and two related organizations were fined $163,000 by the Texas Lottery Commission following an investigation into charges of mismanagement and overstatement of prize payouts.

In Ohio, Cincinnati Hebrew Day School chose to stop running bingo games after a particularly bad year in 2011, when the charity reported losing $18,000. Ben Travis, the school’s executive director, said that new Las Vegas-style casinos opening nearby, and a ban on smoking at bingo halls, have hurt charitable bingo in the city. “It was all downhill from there,” Travis said.

JVS, for its part, lost money at poker and mahjong, not at bingo. In a statement, the group said that it had tried hosting tournaments in 2011 to pull in younger donors. Instead, it lost $17,000. “While JVS continues to seek out new and creative fundraising opportunities to advance its charitable mission, the agency has not held any similar gaming events since 2011,” the group said in a statement.

What happened at FIDF, which raises money in support of Israeli soldiers, is less clear. The $147,000 the group reported losing on gaming in 2011 is the largest amount any Jewish group reported losing, by far, in tax filings submitted in the 2012 and 2011 calendar years. In a statement, FIDF’s chief financial officer, Ron Aloni, noted that the group’s gaming activities had earned it $53,000 in 2012. “Gaming activities help to create interest in our organization and increase donors’ involvement, in the same way other organizations employ gaming events as a method of fundraising,” Aloni said.

In a subsequent statement, Aloni claimed that the group’s 2011 tax filings included an “inadvertent misclassification of in-kind (non-cash) contribution revenue” and that the $147,000 figure was not accurate. FIDF did not offer further explanation of the alleged error, but said that the group had not filed a corrected Form 990 with the IRS.

One last hot tip: If you’re looking to rake it in big, stay away from the Holocaust Memorial Foundation of Illinois, in Skokie, which in filings from both the 2012 and 2013 calendar year earned roughly $700,000 in net gaming income on just over $900,000 in gross gaming revenues. A bad bet for gamblers, but a safe one for the charity.