‘Yiddishland’ Brings Diverse Group Together for Language and Culture 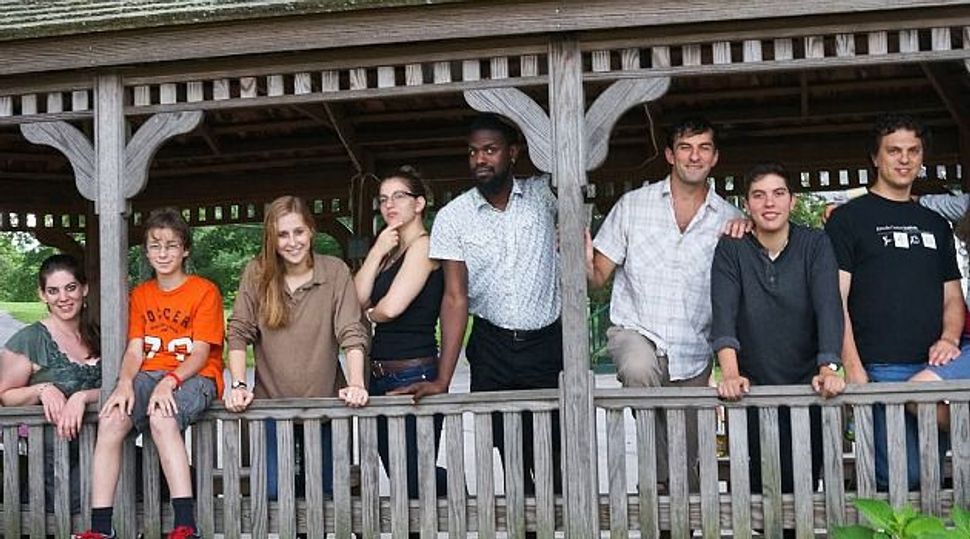 Return to Yiddish: Participants in last summer’s ‘Trip to Yiddishland’ pose for photo. The diverse group is immersed in language and culture — and many return year after year. Image by Dmitri Zisl Slepovitch

Mikhl Baran grew up with Yiddish. Now 91, he says of Oshmiany, the town in Lithuania where he was born, “Even the stones spoke Yiddish in our little shtetl.”

Anthony Russell discovered the language in his thirties. A gay, African-American singer of opera, he stumbled across Yiddish cantorial singing during a mid-career crisis, and says that audiences still need to “get over the surprise” of hearing him croon in the mother tongue.

Both men, worlds apart in nearly every other way, have participated in the “Trip to Yiddishland,” an annual rite of summer put on by the Workmen’s Circle/Arbeter Ring of New York City, an organization devoted to preserving Jewish and Yiddish culture. Their disparate journeys reflect the delicate path such programs must walk between connecting to the past and breathing new life into a language many feared lost to the flames of World War II.

“There isn’t this ridiculous notion that there’s this language that’s about to die — what are we going to do to preserve it,” Russell said of the program. “I could just be there, learn the language and enjoy the people without it being this crisis. Who wants to commit oneself for a week to a crisis?”

And, appropriate to the language that brought us mishegas and tsuris, the program has a fair amount of whimsy. Take for example, the daily ritual of netzbol — volleyball in a pool where participants speak to each other with as much Yiddish as they can muster.

“I think it’s everyone’s favorite part of the day,” said Adrian Silver, a graduate student at Columbia University who is working on a master’s thesis centered on writing an original Yiddish play. “We go into the pool, set up a net and then we talk in Yiddish. We kind of throw the ball back and forth a little bit, but it’s really just a mess.”

Each year since 2008, roughly 100 participants have descended upon the town of Hopewell Junction in the Hudson River Valley on a patch of land near Sylvan Lake operated by the Workmen’s Circle since 1927. It is home to Camp Kinder Ring and the Circle Lodge. The Workmen’s Circle boasts the largest, non-academic Yiddish language and culture program in the U.S.

Notably, “A Trip to Yiddishland” meets participants at their level of experience, with classes from gornisht (beginner) to meyven (expert). It boasts some of the top names in Yiddish instruction: Chava Lapin of Queens College and Miriam Hoffman, a lecturer at Columbia and Oxford Universities. Participants include refugees from the Holocaust, who might speak to each other in Yiddish or Polish or Russian, but also young scholarship students who come from as far away as Sweden and Brazil. Cost of the excursion — which this year ran from July 1-12 — ranged from $250 to close to $1700 depending on length of stay and the style of the accommodations.

“It’s a more expanded mishpokhe,” said Nikolai “Kolya” Borodulin, master Yiddish teacher and coordinator of Yiddish programming, using the word for family. “What’s truly beautiful about this is that it’s a community of four generations, from ages 5 to 100.”

The “Trip” is not alone among excursion programs devoted to Yiddish. It is more language-driven than the arts-themed Klezkamp (which has just announced it is closing), but much less formal than Yiddish Vokh, a strict immersion program where all interaction is exclusively in Yiddish.

Whatever its niche, the Workmen’s Circle is clearly doing something right. Borodulin estimates that 60% of participants come back year after year.

One return visitor is Paulette Jellinek, who ventured on her first trip in 2009 with her husband, Sid, and has returned every year since.

Jellinek describes the program as heymish, drawing on the Yiddish word for the familiar warmth of home.

Jellinek’s parents lived in Vienna and fled the Nazis in 1939. Learning Yiddish through the program, she says, has offered her “an additional close connection” with them.

Haimish describes the camp-like atmosphere of the place, complete with bunk beds and the presence of actual children staying at Camp Kinder Ring. Or it could apply to the informality of the program, which includes a smattering of classes on everything from Yiddish dance to poetry, but also encourages informal schmoozing and strolls along the grounds.

Jellinek, an experienced artist and teacher, likes to paint landscapes by Sylvan Lake. She has lead workshops for the program in which participants create artistic interpretations of Yiddish words and proverbs — a fun example being this famous admonition against multitasking: Men ken nit tantsn oyf tsvey khasenes mit eyn tukhes (You can’t dance at two weddings with one behind).

Jellinek says she returns mostly for the people, many of whom “are really aging in an inspiring way, and make us feel young.”

She could be talking about Baran, who still speaks in the velvety baritone he established in his years as the voice of Yiddish radio on The Forward Hour. He is a fixture at the program, and frequently gives lectures on Yiddish poetry.

After fleeing Nazi occupation, he fought in the Soviet Army and later emigrated to the U.S., where he has devoted much of his life to preserving the language and culture of his youth.

“Since I am a Holocaust survivor and a veteran, I feel the perpetuation of this culture is of utmost importance if we are to remain a nation called Jews,” he said.

While a Trip to Yiddishland does much to honor the past, it has also stressed the importance of kindling interest in the language among a new generation of scholars and artists.

One of those is Silver. He first came to Yiddishland on scholarship in 2012, and will be returning for his third journey this summer. Since its inception, the program has awarded 30 scholarships to students from around the world. Interested applicants must write a 500-word essay about why they want to study the language and how they plan to contribute to the Yiddish cultural legacy.

Silver credits Borodulin, the program’s leader, with luring more young people to the annual trips and creating an environment where young and old interact and learn from each other.

Borodulin’s passion is also evident in his language instruction, which he augments with pictures and slides about his upbringing in the Jewish autonomous region of Russia. Silver describes Borodulin feverishly running around class and standing on chairs as he presents classes on Yiddish grammar.

“He just cares so much, it comes out of his pores,” Silver said. “It becomes so moving and emotional, you don’t even realize you’re learning grammar. You end up having the urge to understand and the urge to speak that goes beyond a desire to learn the language.”

While the scholarships have brought young students from all over the world into the program, it has also opened it to those with no blood ties to the world where the language began.

For example, Russell, a convert to Judaism who has taken on the name Mordechai Tzvi, traces his love of Yiddish to his discovery of the recital repertoire of Sidor Belarsky, a prolific performer of 20th century cantorial music.

One piece from Belarsky’s songbook, “Der Gemore Nign,” particularly spoke to Russell. It tells of a boy, away from home for the first time, homesick and feeling “like a ship without a rudder.”

“In Yiddish, I found text that really spoke to me and my existence as a person — as a gay man, and a black man and a Jew,” he said.

But Russell’s love for Yiddish song preceded his instruction in the basics of the language. That’s partially what brought him to Hopewell Junction.

“I was also missing a community,” he said. “That’s the thing about Yiddish, is that it’s all well and good to sit down and try to teach yourself something, but when you don’t have a community of people who are imbuing what you’re trying to learn with their experiences and their personalities, it makes it much, much harder.”

At Yiddishland, Russell said, he found “people were not only serious about their Yiddish, but willing to share and meet you where you were in your journey.”

In addition to participating in classes, Russell sang in evening performances. Entertainers in previous years have included Joanne Borts, of the Broadway musical “Once,” and klezmer violinist Jake Shulman-Ment.

Each summer, the program culminates in the production of a play under the direction of Motl Didner, associate director of the National Yiddish Theatre-Folksbiene. The pieces have drawn on the short stories of Shalom Aleichem and Isaac Bashevis Singer, and tales of the Dybbuk and the Wise Man of Chelm.

Didner comes each year with his wife, also a performer, and his two young daughters. A favorite memory from his many trips to Yiddishland is seeing his three year old daughter singing a piece by renowned Yiddish singer and poet Beyle Schaechter-Gottesman, in front of Schaechter-Gottesman months before her death in November.

“You get a sense of continuity,” Didner said. “You hear the kids singing Yiddish songs. It does something to you.”

‘Yiddishland’ Brings Diverse Group Together for Language and Culture