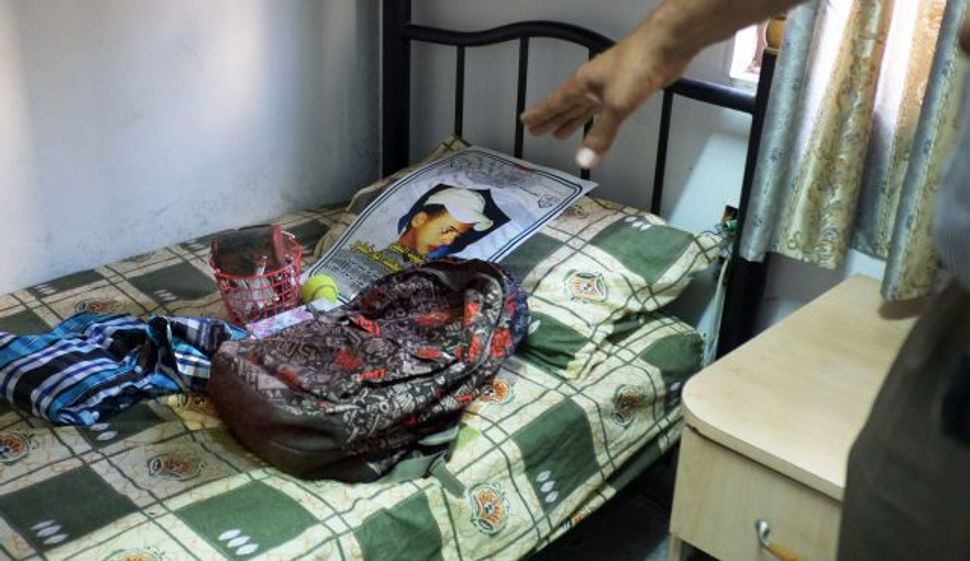 (Haaretz) — We go up to the second floor, to a room that has a bed on the right and a bunk bed on the left, for the three boys: Raad, Saif a-Din and Mohammed. On the bottom bunk, which was Mohammed’s, his father has created a small memorial for his late son: A photograph of the dead boy lies on the pillow, along with a checkered shirt, blue and black, that he liked; his schoolbag; a tennis ball; and a few of his personal belongings, arranged in a jar. A domestic shrine. Again the tears begin to flow, tears of a bereaved father, Hussein Abu Khdeir, whose 16-year-old son, Mohammed, was burned alive.

The home has central air conditioning, something I’ve hardly ever seen in Shoafat, and the air is charged. One aunt doesn’t want condolence visits by Israelis, a few young people on the street below say that the Israelis are coming only to salve their conscience. But the father chooses to sit with us in his son’s room and to talk about him. A bereaved Palestinian father by his dead son’s bed. He’s just returned from a visit to President Mahmoud Abbas in Ramallah. Israeli radio reported that Benjamin Netanyahu called him earlier to offer his condolences, but Hussein told us he had no idea he was talking to the prime minister. Exhausted, grieving, he no longer knows who phoned him and who didn’t.

Delegations of people wishing to console the family arrive in a steady flow – Palestinians and also Israeli peace activists – but Hussein prefers to speak his heart in Hebrew to an Israeli journalist, away from the crowd. What he wants to emphasize most is that Mohammed looked younger than his age and was far smaller even than he looks in photographs – “You would see him and think he was 11, you wouldn’t believe he was 15” – as though to hammer home the horror, which even so cannot be overstated.

Shoafat, a tranquil, bourgeois East Jerusalem neighborhood (as distinct from the refugee camp of the same name that abuts it), looks like a war zone. The light-rail train shelters are burned, there’s a scorched house, and shards of glass and burned tires are scattered on the road, along with stones thrown by residents and the remnants of firebombs that were hurled. Jerusalem municipal workers, protected by dozens of armed police, are sweeping the streets and repairing the ravaged electricity poles. Earlier, when we stopped to ask someone from the neighborhood how to get to the family’s house, he demanded to see a press card before replying – recalling the worst and most frightening days of the intifadas.

The house is at the corner of Shoafat Road and Al-Maari Street, a few dozen meters from Hussein’s electrical appliances store, in front of which Mohammed was kidnapped on that awful night. On the bolted iron door of the shop is a picture of the youth in a khaki cap.

A group of women emerges from the nearby mosque – to which Mohammed had intended to go with his father on the night of the kidnapping – following afternoon prayers. A sign above the store leads to the Center for Child Development. Mohammed has reached the end of his development.

A security camera over a candy shop next to the father’s store documented the events of that night and helped bring about the arrest of the people who kidnapped the boy and burned him alive. Three children are sitting on the steps where Mohammed was standing before he was grabbed, their expressions bleak and stunned.

Former Knesset Speaker Avraham Burg, the writer Nir Baram, and Lea Tsemel, the veteran attorney of the Palestinian struggle (who had just met with a former prisoner who was released in the Shalit deal and been rearrested), came to offer their condolences and were received warmly. MK Ahmed Tibi visits every day – Hussein is his electrician.

“When will it ever end?” the driver of an Israeli taxi, Daoud Siyam, asks a resident of Silwan, the Palestinian village below the Temple Mount, who has also come to console the family. As a boy, Siyam was once arrested and sentenced to prison – “The judges turned us into terrorists,” he says.

Nidal, Mohammed’s cousin, remembers him as a smiling boy. Yassin, another cousin, was released from prison not long ago, during the most recent peace talks. He’d served 26 years for wounding a Jew in a knife attack in the Old City of Jerusalem. He never got to meet Mohammed – in fact, he hasn’t yet met most of the family, certainly not the young people who were born during his long years of incarceration. To help him identify the children, he asks them who their grandfather is.

“In the meantime, all I’m doing is going to funerals and weddings,” he says of his new life of freedom. “To burn him alive – that is the most horrible thing. Israel always talks about how the Nazis burned children 70 years ago, and now, 70 years later, you are doing the same thing.”

Returning from the meeting with Abbas, Hussein gets wearily out of the car that brought him back from Ramallah. The women, including the bereaved mother, are inside the house, the men in the tent.

On the last evening of his life, Mohammed watched the World Cup tournament. He was a fan of Spain, which was knocked out early. His father brought him a special receiver to pick up the games, which cost 1,400 shekels ($410). It is perched now atop the television set in the living room, across from the sofa on which Mohammed sat on the last evening of his life. He then went to sleep and awoke at 3 A.M. in order to attend a prayer service with his father in this blood-drenched month of Ramadan.

On the wall of the children’s room is a map of the world in Arabic. Hussein shows us that both Israel and Palestine are marked on the map. He is barely eating, even in the evening, after the day’s fast; he has hardly slept since the murder, and his physical condition has deteriorated. Mohammed’s teacher in the Amal network school in Atarot, where he studied electricity, once said to his father, “Why are you teaching him to be an electrician? He should be an actor or a director.”

Mohammed’s second love, after soccer, was dabka (an Arab folk dance). In the last weeks of his life he took part in many performances of the dance troupe he belonged to, in local ceremonies marking the end of the school year.

He was a happy boy, his father says. For the first time he peruses the condolence notices in the Jerusalem newspaper Al Quds; his son’s picture appears in every one of them.

Does Hussein trust the Israeli judicial system to punish the murderers? “I don’t trust them. Not in the least. I am afraid. I am really afraid. I think they will say that [the murderers] were insane and give them a year or two and that’s all. They burned him in cold blood. New Nazis. They are heartless. Bloodless. Godless. People who do things like that are Nazis. New Nazis. I think Nazism has now started in Israel. People there shout ‘Death to the Arabs’ – and this is the result.”

In the evening I get a call from a friend of mine from childhood, who now plays in the Israel Philharmonic Orchestra. He wants to go to Shoafat, prostrate himself on the floor and beg forgiveness from the father.