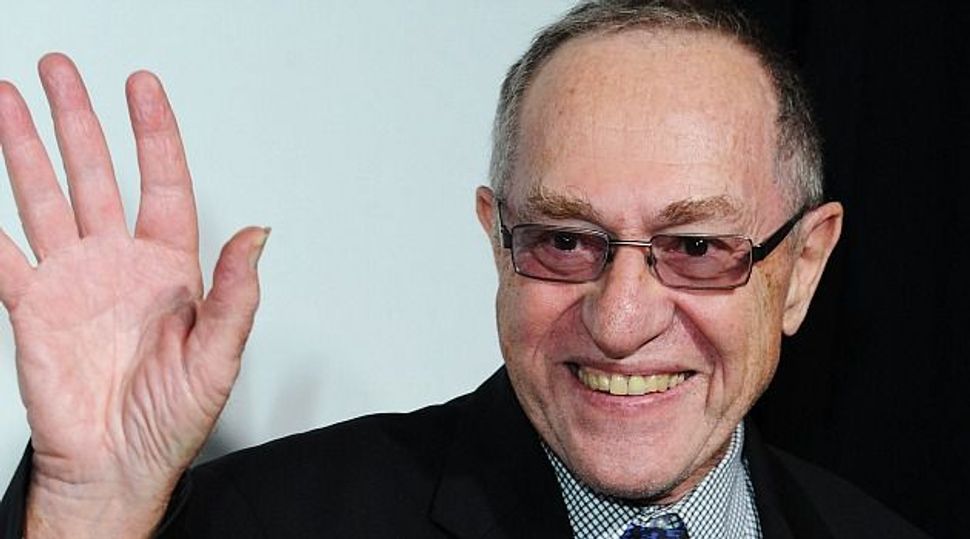 (JTA) — Alan Dershowitz’s house is a bit of a mess.

Most of the rooms in his Martha’s Vineyard home are cluttered with half-unpacked boxes filled with items from his Cambridge house, which he and his wife emptied recently and sold after he retired from his Harvard Law School professorship in June.

Dershowitz himself wears a few days growth of gray beard with his black track pants and a faded blue T-shirt that says “Martha’s Vineyard” in English and in Hebrew letters, looking utterly unlike America’s most famous super-lawyer. Judging solely by appearances, he looks ready to pad comfortably into retirement, with no ambitions beyond a nice walk on the beach.

But appearances can be deceiving. Even at 75, there is nothing retiring about Dershowitz.

Despite leaving Harvard after a 50-year teaching career, despite publishing last October a nostalgic memoir that ends with a letter to the editor to be published after his death (so he can have the last word), Dershowitz says he isn’t slowing down.

“I’m now busier than ever,” he told JTA. “When I was teaching at Harvard, there were limits on how many cases I could take. Now there are no limits. I have no excuses. So I’m involved in some of the most exciting cases in the world today.”

These days, Dershowitz’s practice takes him around the globe as he consults on high-profile international legal issues, such as the trial of former President Pervez Musharraf in Pakistan and a case stemming from April’s deadly ferry disaster in South Korea.

Dershowitz says he has another six books he is writing or plans to write, including one provisionally titled “Abraham: The World’s First (But Certainly Not Last) Jewish Lawyer.” He is working on an opera about the Polish Cantor Gershon Sirota based on Jewish liturgical music.

He wants to create an organization to serve as an alternative to J Street, the dovish Israel policy group with which he has frequently clashed. Dershowitz says his group would seek “a reasonable resolution” to the Israeli-Palestinian conflict “with compromise, but without any compromise to Israel’s security.”

Dershowitz also continues to churn out opinion articles at an astonishing pace, many of them focused on Israel.

“I always have 10 ideas in my head,” he said. “I wake up every morning having to write a column or an article or a chapter of a book.”

Above all, Dershowitz loves to be a part of the action.

“My theory about writing books is every book is a first draft for me,” he said. “I don’t obsess about them. If there are mistakes in them, I’ll correct them in the next edition. I want to get them out. I want my ideas out there. Life’s short. I want to have as much impact as I can.”

By the same token, Dershowitz professes to have few regrets about the life he has lived so far — a couple of columns he wishes he could take back, the occasional client who wasn’t worth the headache, but nothing significant.

“I’m not a looker-backer,” he said. “I don’t tend to look back and regret. I’ve had wonderful children, I have a wonderful marriage.”

Dershowitz is also proud of his career.

“I’ve never done anything for money, which was really important for me,” he said. “I’ve earned a lot of money doing things I wanted to do and that I would have done even if I hadn’t earned the money doing it.”

He said that currently 60 percent of his work is pro bono.

Dershowitz wrote his recent memoir, “Taking the Stand,” not as a kind of valedictory but to clarify what he thought were a few misconceptions about him. One was the view that he is a right-wing Republican neoconservative, not the pro-Israel liberal Democrat that Dershowitz considers himself to be.

Another thing he wanted to set straight is that there are, in fact, two Alan Dershowitzes: the hard-charging, sharp-elbowed “Dersh” character that people see on TV (and, he acknowledges, frequently dislike) and the affable, good-natured man known to his friends and family.

“I’m a pushover when it comes to friends. I never say no, I’m easy to get along with,” he said. “People on the Vineyard don’t recognize the guy they see on TV.”

But the transition from Alan to the Dersh can be lightning fast: Conducting a phone interview on Geraldo Rivera’s radio show, one moment Dershowitz is gazing peacefully out his window at the treetops of Martha’s Vineyard with his hand in his pocket, the next he is pacing back and forth, pumping his fist as he argues with Rivera.

“You’re encouraging Hamas to do what they’re doing and kill babies, that’s what you’re doing,” he shouts into the phone.

After Dershowitz signs off, he gives an excited “Whoo!” In a few moments, he has regained his previous calm.

Dershowitz says he is at peace with his combative nature.

“My wife thinks I spend too much time fighting against my enemies,” he said. “But as I tell my students, don’t try to be something you’re not. That’s part of my personality, that’s who I am.”

He added: “This is my Brooklyn coming-out — if you mess with me, you’re going to have to pay a consequence.”

Dershowitz now plans to split his time between his native New York, Miami Beach and his summer house on Martha’s Vineyard, where the decor reflects his idiosyncratic blend of ego and unpretentiousness, flamboyance and humor.

The walls are covered with photographs of Dershowitz with luminaries like Shimon Peres and Barack Obama alongside images of casual family outings, as well as taped-up newspaper clippings, Roy Lichtenstein art, an old Harlem Globetrotters poster, Jewish memorabilia and maritime-themed tchotchkes.

In the bathroom is what Dershowitz calls his “rogues gallery,” featuring photos and mugshots of famous and infamous individuals, many of whom he has defended. Prominent among them is O.J. Simpson, on whose legal dream team Dershowitz served. Dershowitz says the ex-football star and actor stiffed him on a sizable portion of the legal bills.

President Obama has rented the house next door, and the next house beyond that, owned by Ted Danson and Mary Steenburgen, has played host to Bill Clinton, with whom Dershowitz has dined many times and even davened once, on Rosh Hashanah.

Dershowitz often goes to multiple parties in a night, and for the particular day on which he received JTA, he was planning to play poker with a group of friends that included comedian Larry David.

Dershowitz is also devoted to his routine of a standing noon lunch date on the front porch of the Chilmark General Store. It’s there that he is at his least Dersh, kibitzing with a group of mostly Jewish, mostly older regulars, trading news, gossip and jokes.

Upon hearing that a reporter is present, the friends immediately crack that now they will finally spill the truth about Dershowitz — and then lapse into effusive praise.

“The thing people don’t know about Alan is what a mensch he is,” gushed Sharon Bialy, a front porch regular and a prominent Hollywood casting director. “He is so nice, and he is so kind to all the kids.”

Dershowitz estimates — or at least, he says, hopes — that he has another 10 productive years ahead of him. Once he hits 85, he adds, he will be ready for a more sedate type of retirement.

In the meantime, though, he prefers to remain in the mix while there are still good arguments to be had. In his typology of Jewish lawyers from his upcoming book on Abraham, Dershowitz said, “Clearly I’m the guy who argues with God. For me, the higher the authority, the more I like to argue.”

“I’m just critical of everybody and everything,” he said, a touch of Dersh coming out. Then he added, “There’s nobody with whom I completely agree, including myself.”