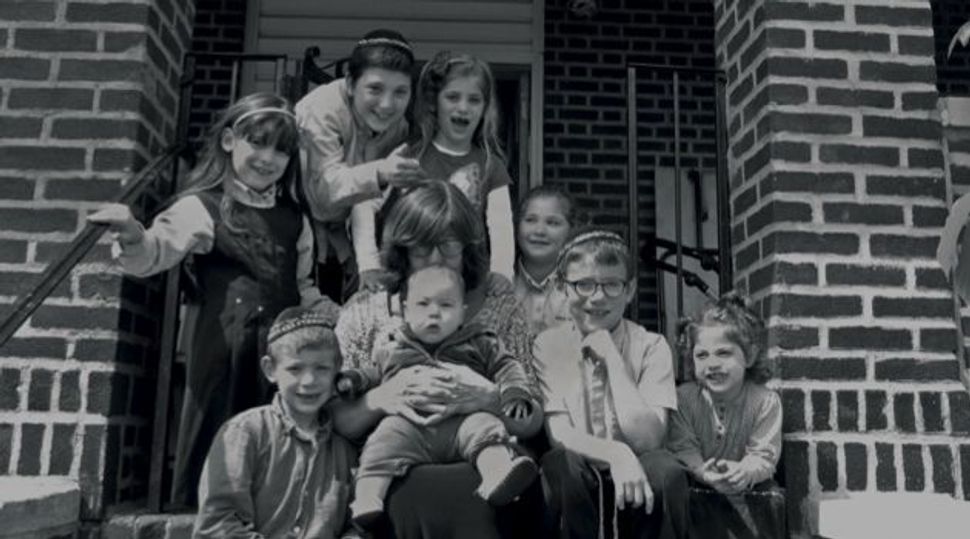 Her Own Brood: Rochel Vail poses with eight of her nine grandchildren on the porch of her Crown Heights, Brooklyn home. Image by Chaya Bar-Chaim

It was not quite 6 a.m. on July 13, 1981, when the phone rang in Rochel Vail’s upstate summer bungalow. Her friend’s frantic husband was on the line. His wife was in labor, and his car had broken down. Would Vail drive them the three hours to the hospital in New York City?

“Sure!” she said, without missing a beat.

Vail piled her three kids, all under the age of 3, along with the expectant couple, into the car, which was ”a jalopy like you’ve never seen,” she remembered.

At one point in the drive, the pregnant woman asked to make a pit stop. Vail stopped at the Ramapo, New York, gas station and instructed the woman’s husband to fill up the tank with gas while she accompanied her friend to the restroom.

Five minutes passed, then 10. “The reason we didn’t come out was quite obvious,” Vail said with a smile.

“I had zero training; never even had a first aid class,” Vail said. “It was, ‘Give me a baseball glove,’ and I caught. That’s it.”

That was the day that Vail decided to spend her life helping women give birth. Thirty-three years later, Vail, now 56 and a mother of 10, has helped deliver more than 2,000 babies. She is a certified doula, an emergency medical technician trained in CPR and a Red Cross instructor. She is also a household name among families in the Chabad community of Brooklyn’s Crown Heights, where she resides. The purple walls in her office are plastered with hundreds of thank-you notes from new parents.

Despite the high demand, Vail aims to keep her prices affordable. “If I were smart, I could put my name out there in Manhattan and get paid double what I get paid here,” she said. “But I’m not interested. [Crown Heights girls] are my girls. That’s it. That’s how I feel.”

Vail’s warm relationship with the girls and women of Crown Heights is the result of years of interaction with them. Once a month she goes to the largest local girls elementary school and preschool to check the students’ hair for lice. She also teaches CPR courses to the 11th and 12th graders at Beth Rivkah, the largest girls high school in the area.

Many of her students later become her clients; in delivering their babies, she comes full circle.

“I just feel like this community is really one family,” she said.

“I see them in preschool, in high school, after marriage. I was taking attendance one day, and this girl raises her hand and says, ‘My mother told me to say that you were there when I was born.’ I mean, I know everyone.”

To Vail’s clients, she is more than just a doula.

“She’s a righteous woman, an angel,” said a 24-year-old Crown Heights mother, who for privacy reasons declined to give her name. This mother was 20 years old and 36 weeks into her first pregnancy when she learned that her child would be stillborn and that she would have to carry the baby to term nonetheless.

Devastated and confused, she called Vail, who had planned on going upstate that week.

Vail invited the young couple over to her house and spent hours with them, carefully explaining the details of what to expect during the delivery and offering them support and reassurance.

“I thought she was going to be upstate when I would have the baby,” the mother recalled. “But she told me, ‘I’m coming in [to the city] for you.’”

The labor lasted more than 24 hours. “She knew exactly what to do right after the baby was born,” the young mother said of Vail. “She took the baby, wrapped it in a blanket, and handed it to me. She said, ‘You need to hold your baby so you can have closure.‘ That was very healing for me. Afterwards, she wouldn’t take money. She said, ‘I don’t take payment when there’s no baby.’”

The story has a happy ending: Vail has since delivered the mother’s other two other children, who now know her as “Mama Rochel.”

“Some births are happy, beautiful and heartwarming,” Vail said. “Others are nasty, sad and miserable.”

In her work, Vail has learned that nothing is predictable.

Her family also takes her work in stride, despite the long hours she spends away from home when on call. “The kids are used to it,” she said. “I’ve been doing it for so many years, they don’t remember when I wasn’t doing it.”

”Plus,” Faigy added with a laugh, “I know that I’ll be well taken care of when I’m in labor.”

Vail was present at the birth of every one of her nine grandchildren. “I remember when I taught my daughter-in-law in high school. She said, ‘When I have a baby I want Mrs. Vail there.’ And then she got engaged to my son. And she said, ‘Ever since high school I wanted Mrs. Vail to deliver my baby, but I don’t know about my mother-in-law.’ And she went back and forth.”

Chaya Bar-Chaim is a communications student at Baruch College. She lives in Crown Heights, Brooklyn.