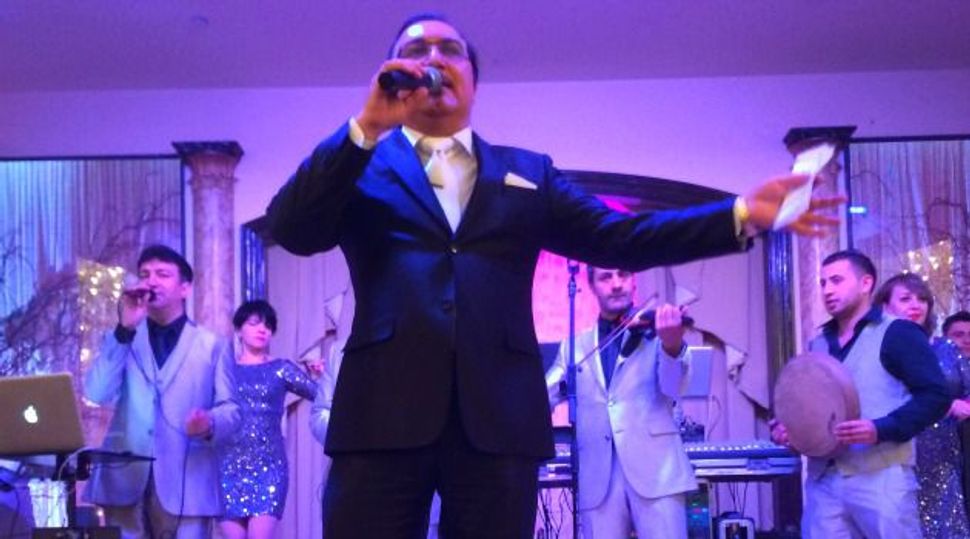 The Yuhan believes he might be Bukharian Jewry’s last great hope.

“Assimilation will kill us,” Yuhan said. “We are drowning, but I still want to take a last grip of air.”

Bukharian Jews held on to their traditions among the Muslim populations of Central Asia for more than 1,000 years. But maintaining Bukharian culture in the melting pot of Queens for more than a few decades is proving difficult.

Separated from their homelands of Uzbekistan and Tajikistan, the Bukharian diaspora community finds itself staring into the cultural abyss.

Yuhan, a 51-year-old wedding singer, believes he may have the answer. “Wedding is the only place still holding our community together,” he said.

A wedding singer might seem an unlikely savior of a community, but wedding singers occupy a more vaunted position in Bukharian society than in America at large.

Bukharian wedding singers don’t just sing songs, they host weddings from beginning to end. In Queens, where up to 10% of the Bukharian community can show up at each wedding, a singer — like a rabbi — can elevate a rite of passage.

Like Cher, Angelina and Britney, Yuhan has attained such a level of fame that his last name — Benjamin — has become superfluous. Everyone knows “the Yuhan.”

One morning in June, Yuhan was sitting with me at the kitchen bar of his home in the Rego Park section of Queens. He bought the property four years ago, tore it down and rebuilt it to his own taste. Gold columns rise through the living room; the floors are made of dark wood, and the furniture is mostly black. Paintings of Paris and Italy adorn the walls, a far cry from his birthplace in Tashkent, the capital of Uzbekistan.

Central Asia’s Jews lived in relative stability alongside their Muslim neighbors for much of the Soviet era, according to Alanna Cooper, a cultural anthropologist at Boston University who specializes in Bukharian Jews. But economic instability and a rise in Uzbek nationalism following the collapse of the Soviet Union led to tens of thousands migrating. Today, only a few hundred Bukharian Jews remain in Central Asia.

Like the Jews of America’s Syrian and Iranian communities, Bukharians have less fear of intermarriage than other American Jews. When Bukharian parents bemoan their children marrying out, they usually mean their son or daughter is marrying a Georgian Jew or, more exotically, an Ashkenazi one.

But their culture is disappearing. Young Bukharian couples do not speak their traditional language, Bukharian, a dialect of Farsi. They are turning away from the traditions of their parents and grandparents, such as Bukharian music and modest styles of dress.

Weddings are about the only tradition that remains strong. A typical Bukharian wedding caters to between 350 and 400 guests. Live bands play music from across Eastern Europe and Central Asia, including Russia, Armenia, Uzbekistan, Azerbaijan and Tajikistan. The dancing usually starts at around 10:00 p.m. and continues until the early hours of the morning.

Weddings are important, Yuhan told me, because they are about the only occasion where the community comes together in large numbers to meet, talk, celebrate and maintain their traditions.

But he believes that even Bukharian weddings are under threat. Couples are increasingly demanding Western club music instead of traditional tunes. The rapid drumbeat of the doira, a sort of oversized tambourine, is being drowned out by a stomping electronic bass. Some couples avoid live music altogether and hire a disc jockey.

“It’s a crime,” Yuhan said. “You can hire a DJ for a bar mitzvah, for kids a little bit to dance. Maybe a small birthday or a show. A wedding — it’s only once in a lifetime.”

Weddings are not primarily just a party for the young couple and their friends, he added. They are about reuniting families and showing relatives respect. “It’s not a discotheque,” he said.

Today, Yuhan sees weddings as an opportunity to educate people, especially young Bukharians, about their past and their future. He encourages couples to allow him to play as much traditional music as possible. During the wedding, he preaches the importance of tradition and continuity. But Yuhan fears he is fighting a losing battle.

“If you take it out from our culture — weddings,” he said, “our community will be dead.”

Yuhan Benjamin was born and raised in a Tashkent neighborhood full of musicians. They included the renowned Uzbek Jewish poet, Ilyas Malayev, who taught him how to mix musical styles, rhythm, harmony and language.

After college, Benjamin worked stints in Bulgaria as a wedding singer and in Italy as part of a cabaret show. But he performed mostly at weddings across the Soviet Union, in Russia, Armenia, Azerbaijan, Tajikistan, Kazakhstan and Georgia.

During the late 1980s, Benjamin said, he earned up to 1,000 rubles for a wedding gig, while his father, a teacher, earned 170 rubles per month. “I was very famous that time in Russia,” Benjamin said. “Everybody knew me.”

Benjamin immigrated to America in 1990. Within one week he had his first wedding gig in Queens. He also played nightclubs, like Metropol Restaurant in the Canarsie section of Brooklyn. “That time was golden era of Russian nightclubs,” Benjamin said.

During the 2000s, Benjamin released two albums, “Love Never Dies” in 2004 and “Universe of Love” in 2012. He continued to play concerts and weddings. But he also became something of an unofficial community leader. People asked him to appear as a speaker at circumcision ceremonies and at funerals.

Benjamin’s second wife, Esther — he divorced his first wife — said many people stop by their home to ask advice. “They have a problem with a child, a wife, a husband, and they are asking him for answers, for his support, his opinion,” she said.

Benjamin sees the rise of divorce in the Bukharian community as one of the principle symptoms of assimilation. He said it is particularly shocking because divorce was so rare among Jews when they lived in Central Asia. “In Bukharian community we have a big problem right now,” Benjamin said. “I told them, ‘Don’t be American yet. You can’t swim in that river; it’s too deep for you.’”

Shortly before 1:00 p.m. Benjamin hurried downstairs to his basement recording studio to prepare for a two-hour radio show he presents on a Russian-language radio station, Danu. The show is called “Eastern Tales,” and Benjamin opened with an anecdote about his grandmother’s wisdom regarding the meaning of life. Then he moved on to talk about how the younger generation had lost their moral code.

“Keeping our culture is harder than letting it disappear,” Benjamin said. He pointed out that previous generations of Bukharians kept their language and culture during much more difficult times. “Don’t rush to the store,” he said. “Rush home, because there you have your parents and your children.”

‘My brother-in-law said, ‘You don’t need the Yuhan,’” Arthur Dabakarov tells me one recent evening as he sits in the cocktail lounge of Elite Palace, a lavish function space in the Woodside section of Queens.

Dabakarov, who had 500 guests at his January 2011 wedding, says that he insisted on hiring Benjamin over the objection of his wife and in-laws. “When he plays the music, everybody is loving that time,” Dabakarov says, showing off wedding photographs on his cell phone.

Elite Palace, which opened six years ago, is one of the closest kosher event spaces to Queens’s large Bukharian communities of Rego Park and Forest Hills. Its grand ballroom can seat up to 700 people.

Tonight, Dabakarov is overseeing the kosher catering for the wedding of Milana Suyunova and Michael Ovaidov, who have laid on a feast for 470 people at a cost of between $150 and $200 per head for food and liquor alone.

Benjamin, dressed in a dark suit and a white tie, stands in the foyer of Elite Palace at around 8:30 p.m., trying in vain to usher the guests downstairs for the wedding service. Each time he approaches a group to cajole them politely into heading downstairs, he is drawn into a hug or a back slap, and a conversation.

It takes about half an hour for Benjamin to marshal enough guests into the lower-floor ballroom for the wedding ceremony. He stands in front of the chuppah, microphone in hand, and introduces the VIP guests in Russian and in English with all the vim of a Barnum & Bailey ringmaster.

Benjamin’s music — a mélange of Middle Eastern and Central Asian tunes influenced by styles from Azerbaijan, Iran, Georgia, Armenia and Tajikistan — plays loudly as he announces each guest’s procession down the aisle. An aunt appears: “Hur-rah!” Then the best man: “Ma-zal Tov!” Even the bride’s great-grandfather is made to sound like a superstar as he shuffles down the aisle.

The performance builds to a crescendo until it is time for the stars of the show. “Everybody make some noise for the bride and groom, Mi-chael and Mi-lana!” Benjamin announces in English. Then, as Rabbi Avraham Tabibov, wearing a traditional Bukharian gold-embroidered robe, takes over for the marriage ceremony, Benjamin steals upstairs to prepare for the main event.

There is no warm-up act in the grand ballroom. As guests take their seats, Benjamin prowls the dance floor, firing off classic Russian songs over the din of hundreds of conversations.

When the first song fails to get a reaction, Benjamin baits the crowd in Russian: “It was a bad song. No one liked it. Is there anyone in this hall?” When the second song appears to bomb, too, he baits them again: “Well done, Yuhan! No one applauded. No one liked it.”

Then the band starts up with one of Benjamin’s own songs, “Shirin Shirin” (“Sweet, Sweet”), as the parents of the bride and groom enter the ballroom, dancing in an Eastern style across the dance floor. Next, to the deafening beat of electronic dance music, the bride and groom make their triumphal entrance.

At a ceremonial bread breaking at the top of the dance floor, Benjamin thanks the couple’s parents for raising such good children. He announces the beginning of a new American Jewish couple: They just have to remember where they came from. They have to maintain their traditions: “Be good people from our community.”

By 10:30 p.m. the dance floor is full of men and women, arms spread like wings, their wrists twisting in the air. From his perch on a semi-circular stage lit in violet and pink, Benjamin and his eight-piece band, plus two backing singers, glide between languages, from Russian to Armenian, from English to Italian. Although there are some Western songs, the music is predominantly from Russia and Central Asia. Once in a while, Benjamin takes a break from the stage while his backing singers or a DJ keep up the entertainment.

Before the music began, Benjamin had seemed a little deflated. “Maybe next year I am going to retire,” he said. “I am tired.” But surveying the writhing dance floor from the side of the stage, Benjamin looks satisfied. “I invent this business,” he says, motioning toward the dance floor. “I teach them how to do a party since 1991.”