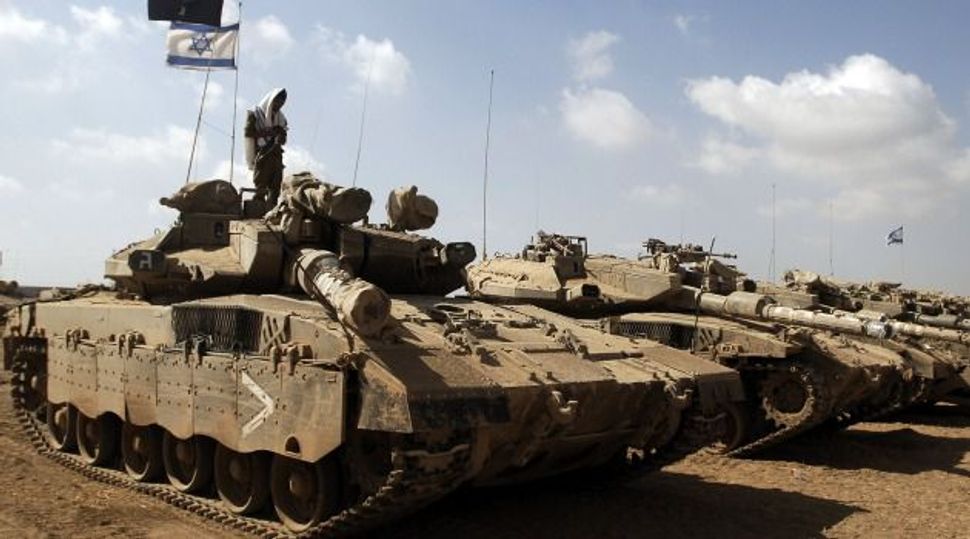 One of the more surprising things about the war in Gaza is the fact that most Israelis still don’t call it a “war.” In Israeli media, the war is largely referred to as mivtza, which translates as “operation” but is rarely used to mean that in vernacular Hebrew. Outside of referring to military actions, the word mivtza has only one meaning: “a sale,” in the commercial sense. As in “Flip-flops on sale” or “End of season sale. Everything must go!”

After three weeks of fighting, more news outlets finally began to use the Hebrew word milhama, “war,” though only as a set headline, superimposed on the upper-left corner of the page. In the rest of the text, as well as in the round-the-clock reporting of news anchors on the TV and radio, the war is still referred to solely as a mivtza. As I write these words, the main article on the popular Israeli news portal Walla! repeats the word four times, in three stories on the conflict and in an advertisement at the bottom of the page for a Domino’s Pizza sale.

In Israeli military language, the word mivtza is used to mean “operation,” and in another more common form — “mivtza’i” — to mean “operation ready.” But the army language stays secluded in the army until Israel is engaged in a fighting situation. Then the military dialect leaks out to become the dominant dialect of the state.

Originally, the word mivtza belonged to the world of commerce. Some claim the source is Arabic, from Bcha’a, meaning “merchandise.” Some note its Jewish roots: In the Hebrew bible, the root of the word mivtza (beit-tzadik-ayin) appears in the word betza, meaning “profit.” The profit it signifies is a specific sort, gained in an immoral way. The first time it appears in the Bible is in Genesis 37: Debating whether or not to kill Joseph, Judah suggests to his brothers they should sell him, because “what profit [betza] will we have if we kill our brother and cover his blood?”

In reality there is a definite correlation between the term mivtza and actual commerce: in Israel, areas afflicted with “war” are said to be entitled to a certain amount of financial help from the state, while those afflicted with a mivtza are entitled to less. The question of whether Israel is engaged in a war or a mivtza reached the Knesset Finance Committee many times during the last month, as Israeli politicians and business representatives asked the committee to declare the current mivtza a war (milhama) so that those on the Israeli side who suffered from it may receive proper compensation.

The Israeli equivalent of the IRS claimed in return that the compensation would not change according to the terminology, and that in order for an area to be eligible for indirect compensation due to the fighting, it needs to be declared a “special case” by the military. As a result of this definition, even after the Israeli government finally declared the Second Lebanon War a milhama, the numbers of those entitled to compensation did not grow, as the military did not declare areas “special cases,” and so the tax agency refused to recognize them as such.

In his popular language columns in Israeli newspapers, Israeli author and linguist Reuven (Ruvik) Rosenthal has been writing about the use of Hebrew throughout the conflict. He is now completing a comprehensive study of Israeli military language.

“In general,” he says in a phone interview with the Forward, “armies and political systems involved in war tend to create a linguistic structure which serves the narrative and interests of the fighting country. The military views this strategy as legitimate, and I agree with them. The problem in Israel is in the media, which mostly adopts the military’s terminology without ever commenting on it, or criticizing it.”

Israeli Hebrew is a new language, or at least a recently thawed one, still in the midst of its rapid modern evolution. Its malleability makes it even more open to manipulation than other languages. Not long ago, Israelis were introduced to new words through the morning paper — “From today forward, don’t say ‘tomato,’ say ‘agvania’!” — and by night, everyone was using the modified vocabulary. Modern Hebrew has always been dynamic, and its governmental updates were always delivered to the public via the media.

Ghil’ad Zuckermann, chair of linguistics and endangered languages at the University of Adelaide, Australia and author of “Israeli: A Beautiful Language,” refers to modern Hebrew simply as “Israeli.” “The difference between Israeli and other languages,” he says in a phone interview, “was speed. The emerging Israeli tongue — which is a result of a hybrid genesis — had to come up with so many words within several dozen years.”

Zuckermann draws attention to another force pulling at modern Hebrew — the language used by Hamas: “Working to frighten Israelis through the digital publication of clips and tweets, Hamas writes in the Israeli language…. So generally, I argue that whilst Hamas might not recognize Israel, it does actually recognize, at least de facto, Israeli, as a language.”

The Israeli handling of language is in constant debate outside its borders. Palestinian Twitter users often refer to the IDF (“Israel Defense Forces”) as IOF (“Israeli Offensive Force”), for instance. Inside the borders, the debate is mostly satirical.

In Israeli comedy — and in its social networks — it is now considered an old cliché to mock the pornographic nature of the titles of the mivtzaim: “Oferet Yetzuka” (“Solid Steel”), 2008; “Amud Anan” (“Pillar of Cloud”), 2012, and today’s “Tzuk Eitan” (“Strong Cliff”) are all unmistakably phallic. A comic meme that went viral at the beginning of the war offered Israeli Internet users an “IDF ‘mivtza’ title generator.” The comedy comes of the fact that as much as it can be a useful tool for IDF copywriters, it may also prove to be a great tool for porn producers searching for a title for their next film.

Unlike Israeli comedians, Israeli journalists and academics rarely comment on the enlistment of the language. There are exceptions, of course. In 2001, Ayelet Cohen from The Hebrew University of Jerusalem published an essay in which she pointed at Israel’s political control over the Hebrew language. She noted that when Prime Minister Menachem Begin first rose to power in 1977, Israeli journalists were instructed to stop using the term “West Bank” and instead call the area by its biblical name, “Yehuda ve’Shomron.” To this day, the modified title, identifying the area with its Jewish regime, sticks. Click on the Hebrew button on the Wikipedia page for The West Bank, and you’ll be transferred to the Hebrew Wikipedia page for Judea and Samaria.

In his nonfiction book “The Yellow Wind,” published in 1987, Israeli novelist David Grossman, reflecting on the country’s political use of language, wrote about “new words that instead of describing reality, try to hide it.” Twenty-seven years ago, Grossman pointed at the fact that a “Palestinian opinion” is referred to in Israeli media as “incitement”; that the cities of the West Bank are never said to have “streets,” only “alleys,” and that under Israeli coverage, Arabs never “die” but rather “find their death” — a uniquely Israeli idiom with the power to make the dead an active part of their demise.

In 2005 the government used its influence over Hebrew not to control the narrative of its international affairs, but rather in a domestic challenge.

In the media, the action of dismantling the settlements in Gaza was called itnatkut (“disengagement”). Among the settlers from whom Israel was “disengaging” — as well as their religious supporters and the Israeli right — the action was firmly recognized as girush (“expulsion”). To this day, if you say itnatkut to a right-wing Israeli, he will likely correct you: “You mean girush.” The most popular bumper sticker at the time became a miniature battlefield for this semantic civil war: Israel’s right decorated their cars with stickers instating that “Jews don’t expel Jews”; in reply, Israel’s left covered their own cars with stickers that claimed: “Jews don’t expel Jews, they just move them a little to the side.”

Just a year later, another radical change in terminology was introduced when Hamas took IDF soldier Gilad Shalit prisoner. In the endless coverage of the case, Israeli media referred to Shalit solely as hayal hatuf, meaning, “a kidnapped soldier.” Former Israeli soldiers held prisoner by the enemy, such as Ron Arad, were always called hayal shavui, meaning “the captive soldier.” But the more personal and emotional, less military-related “kidnapped soldier” term was quickly cemented, and remained in use for the entire duration of Shalit’s five-year captivity, and unto this day. During the latest round of fighting, Israeli soldiers taken — or rumored to have been taken — prisoner by Hamas were reported only as “kidnapped.”

Rosenthal points out another Israeli term that has been replaced: “innocent civilians.” Once used to describe those casualties of war who were not soldiers but rather ordinary citizens, in Hebrew they were called ezrahim hafim mipesha, literally meaning “citizens who have committed no crime.” This, however, insinuated that soldiers had committed crimes, and so it was replaced. “Instead,” Rosenthal, said, “we use ‘noninvolved.’

“Though all in all, the most important new substitution, in my opinion, is one that is meant to describe our future understandings with the Palestinians: We no longer say we strive for an eskem (meaning ‘agreement’) with them, but rather for a hasdara (meaning ‘arrangement’). The change of terms signifies the lowering of our expectations.”

One of the words that have lost meaning during this conflict is the Hebrew word itaklut. During the past few weeks, the use of this word has meant one thing, “combat.” But the original meaning of the word was simply “bumping into.” When you bump into your old friend on the street, it is an itaklut. Every conversation with every aunt around Israel begins with a use of a form of the word: “Lo ta’amin be’mi nikalti,” “You wouldn’t believe who I bumped into.”

The term wasn’t used to describe IDF combat situations until 2004, but it has reached a peak during the past month: Galey Tzahal Radio Station now runs with “The IDF Bumped Into a Hamas Group,” while Walla! takes it to the next level by not even saying what the soldiers bumped into, only mentioning that there has been a bump-in: “A documentation of a Giva’ati Force bumping-into.” Again, the transition went unnoticed. In fact, it was only when I had to translate the news to an English speaker word for word that I realized I have been saying the words “bumping-into” while meaning “combat” for two whole weeks.

Later, in the midst of political conversations — it is impossible to do anything in Israel today without being engaged in such — I noticed that my Israeli conversation partners were also all using itaklut when what they meant was “combat.” Ironically, we were doing it while discussing the fact that mivtza has replaced “war.” By the time we are aware that our dictionary is changing, that its loaded terms are slowly turning to disarmed ones in our mouths, it has already changed again.