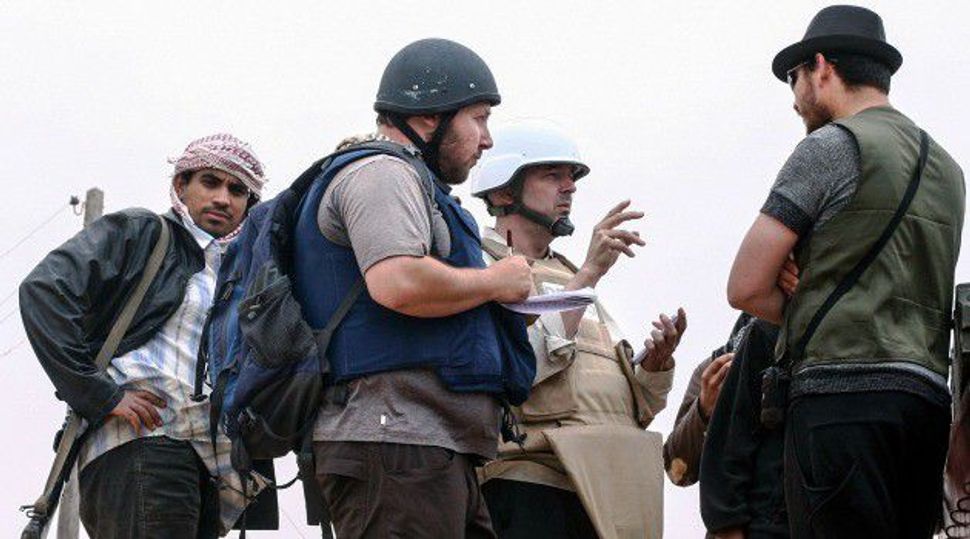 The past few weeks were the hardest for Steven Sotloff’s family and friends.

Painfully aware of the growing danger that the terrorists holding the young Jewish journalist for the last year would kill him, Sotloff’s circle of supporters nevertheless felt compelled to act in secret until nearly the very end.

Their efforts to save the 23-year-old’s life from the Syria and Iraq-based terrorist group now known as Islamic State were marked by frantic efforts under impossible circumstances.

The Jewish community was quick to offer its network of support. But unlike many previous crises, what was needed this time was not a loud communal show of force. To the contrary, Jewish activists sought to lower the community’s profile and squelch any reference to the hostage journalist’s Jewish and Israelis ties.

Those ties were nevertheless a defining factor in Steven Sotloff’s life.

A grandson of Holocaust survivors growing up in the heart of a Jewish community in Miami’s southern suburbs, Sotloff wore his faith on his sleeve. After studying at the University of Central Florida, where he majored in journalism and wrote for the student paper, Sotloff decided to move to Israel and study there. Sotloff chose to make aliyah rather than come as a foreign student and assumed Israeli citizenship.

“Jewish identity was an important part of his life. He’s not the kind of guy who would do a half assed work,” explained Gregg Roman, a close friend of Sotloff who described him as a “modern day Jewish Indiana Jones.”

Sotloff lived in Israel from 2005 to 2008. In this short period he took Hebrew lessons with other new immigrants at an ulpan, studied, freelanced for Israeli publications and made friends on the Rugby field and among classmates. It is there where his passion for reporting from the Arab world grew. He took Arabic classes and told his friends about his dream to cover the Arab world as a roaming journalist, a dream he began to pursue upon graduation. Equipped with good Arabic and with less than perfect Hebrew, Sotloff left Israel immediately after his studies at the Interdisciplinary Center in Herzeliya ended. He did not serve in the Israeli military, a compulsory service for every citizen.

Sotloff’s first stop was Yemen where he immersed himself in the studies of Arabic and Arab culture, adopting local traditional attire and perfecting his language skills while pitching stories to American news magazines. The Arab Spring took the young journalist from one revolution to another, starting with Libya, through Egypt and ending off in his fateful decision to cover the Syrian civil war.

“He had a love for the region. He took time to understand the region, to understand the people, to make friends and contacts there, to learn the language, and it allowed him to get stories,” recalled Matthew Van Dyke, a friend of Sotloff’s in a recent TV interview. Van Dyke, a filmmaker and activist, fought with the anti-Qadafi forces in the Libyan revolution and had become friends with Sotloff during his time in the region.

Sotloff’s acquiantances stress, however, that he was not an ideologue. They describe him as cleared eye about the benefits and the shortfalls of the revolutions in the Arab world. “He was an honest individual, he had no ideological motivation,” said Roman.

Back in Florida, Sotloff’s parents and sister learned about his abduction soon after it occurred in August 2013, shortly after he had entered Syria through the Turkish border. Following the official American policy of not identifying the names and number of Americans held by ISIS, as the terrorist group was then known, the family decided to maintain a low profile and to conduct its efforts away from public eye. The reasoning behind this move was the understanding that ISIS’s primary purpose in kidnapping foreigners is to rake in ransom money used to fund its operation. Making the case public, his family believed, could hamper attempts to reach a peaceful release.

The United States, however, also holds a strict policy of refusing to pay ransom to terrorists. The Sotloff family, sources close to the events told the Forward, did not ask to change this policy or to bypass it. But others did. Kahana said several American Jews agreed to put up millions of dollars for Sotloff’s release, if ISIS would be willing to cut a deal. He also said that an envoy carrying this message traveled from Yemen to Syria recently to present the proposal. Other sources close to the family said that if there were any attempts to raise ransom in the Jewish community, they were done without the permission or the knowledge of the Sotloffs.

The family had two main goals in the first months after Steven’s abduction: to gather any piece of information about their son, and to meticulously scrub any evidence from open Internet sources that would enable his captors to learn about his Jewish roots and Israeli citizenship.

In recent months the pressure mounted. The military incursions of ISIS forces into Iraq, followed by the Obama administration’s decision to launch airstrikes against the terror organization, indicated that the threat to Sotloff’s life was growing. Then came the chilling video clip showing the brutal beheading of fellow American journalist James Foley that sent the family into a frenzy of activity.

The Sotloffs were not alone. Along the way they’d assembled a team of friends and professionals that managed the daily operation of trying to keep Steven alive. It included Rabbi Terry Bookman of Temple Beth Am in Pinecrest, where Sotloff’s mother Shirley taught pre-school; the Jewish federation of Greater Miami; and friends that joined in. Roman, Sotloff’s colleague from the IDC debate club, heard of his kidnapping and joined in. Barak Barfi, an expert on Middle East terror groups offered his advice and quickly became a personal friend and spokesman for the family. Experts on kidnapping and ransom and communications professionals joined in and offered their expertise pro bono. The local Jewish community also raised money used for travel expenses and for contracting locals on the ground that could help with reaching out to ISIS and obtaining information on Sotloff.

The family’s “coming out” as one of the members of this close circle put it, took place a week before Sotloff’s murder, when the family and supporters came to Washington for meetings at the White House, State Department and Congress. After months of working behind the scenes, they spoke out openly as a group to officials, trying to raise awareness to the growing danger Steven was facing.

Sotloff’s supporters also reached out to Jewish organizations and federations, building a network of support. But they made clear to Jewish groups that there had to be a public barrier that would ensure ISIS terrorists don’t make the connection between communal activists and Sotloff.

At the same time, attempts to reach out to ISIS through any possible channel continued. Just a day before his beheading, an email arrived with information a few days old, confirming he was still alive. “We felt good about it,” said Kahana.

But the next day, the beheading video surfaced, shattering the family’s hopes.

Secrecy, however, shrouded many of the details about Sotloff even after his death. The Israeli military censor waited until the United States officially confirmed Sotloff was dead before lifting the order prohibiting Israeli media from reporting about his dual citizenship. Members of the family’s support team continued to try and convince American media outlets not to report on Sotloff’s Israeli ties, arguing that when ISIS terrorists learned about it, they might lash out at the remaining hostages still being held.

“Everyone involved in this effort had only one goal,” concluded Roman, “to try and save Steven’s life and the life of all other hostages. But it wasn’t enough.”