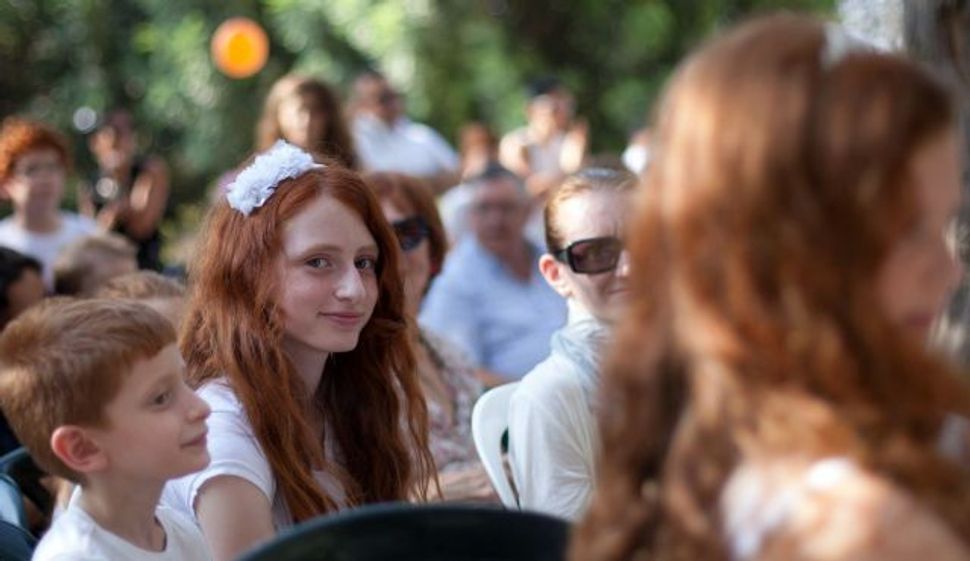 (Haaretz) — There may be no such thing as a Jewish gene, but communities can definitely have defining characteristics, and one such community is Jews with roots in central and eastern Europe.

A model based on the genetic sequencing of 128 Ashkenazi Jews concludes that today’s Ashkenazim descend from the fusion of European and Middle-Eastern Jews during the medieval era, between 600 to 800 years ago.

The math also indicates that today’s sprawling community of Ashkenazi Jews — there are more than 10 million around the world — derived from just 350 people or so. That previously postulated population bottleneck — a drastic reduction in population size — occurred between 25 to 32 generations ago, the scientists say.

The study was published Tuesday in the journal Nature Communications by a team headed by Columbia University’s Shai Carmon.

A number of genetic characteristics are associated with Ashkenazi groups, as opposed to other Jewish populations and other contemporary Middle-Eastern and European peoples. Certainly they are genetically distinguishable. “Compared with European samples, our Ashkenazi Jewish panel has 47 percent more novel variants per genome,” write the scientists.

Unfortunately, Ashkenazim are also associated with no less than 19 genetic disorders, according to the Center for Jewish Genetics. Many are fatal and arise from single-gene mutations. The list includes forms of breast and ovarian cancer, Tay-Sachs disease and so-called maple syrup urine disease, in which the pee of affected children smells sweet.

Compared with Europeans in general, Ashkenazi Jews have a slightly greater deleterious mutation load, as it were. (Sephardi Jews have illnesses of their own, including the genetic disorder Wolman’s disease and an allergy to fava beans – the ful so loved by non-allergic Israelis.)

The study also concluded that the ancestral European population experienced a bottleneck of its own when diverging from ancestral Middle Easterners 20,400 to 22,100 years ago, around the time of the Last Glacial Maximum – when the ice sheets had done their worst. The ancestors of both of these populations had undergone another bottleneck, probably corresponding to an out-of-Africa event.

In any case, there’s a reason most societies prohibit incestuous marriages. The closer the genetic makeup of the parents, the greater the likelihood a recessive disorder will be expressed. There is even evidence that, at least as far as the pheromones we emit are concerned, close relatives find one another repulsive.

The genetic conditions afflicting Ashkenazi Jews are recessive by definition. If they were dominant, the disease would be eradicated, unless they only appeared in advanced age.

Thus a person may carry a recessive gene for a condition, but it would remain unexpressed in him and his offspring unless he married a woman with the same recessive gene and the offspring got both. Then the children could develop the condition, though they might not.

A bottleneck in a population is practically a recipe for proliferating genetic disorders, because by definition, genetic variation is reduced. If there are 1,000 people and only two have a “bad” recessive gene, their odds of meeting and marrying are a lot smaller than if the population consisted of 100 people.

A corollary is the so-called founder effect: When a new population is founded by a tiny group of individuals, all the offspring will have a reduced genetic variation.

Ashkenazi Jews with breast cancer and Sephardi Jews with fava intolerance are just two examples. Another is the Boer population in South Africa; it derives from a tiny founding group and has an unfortunate tendency to contract Huntington’s disease.

The problem is also notorious in today’s drives to keep species alive. Efforts to repopulate the planet with beloved wildlife run into the problem of weakening offspring.

One of the saddest examples is the cheetah; the remaining population has very low genetic diversity following a bottleneck some 12,000 years ago. Thus those fastest of cats suffer problems from rickets to dysfunctional sperm.