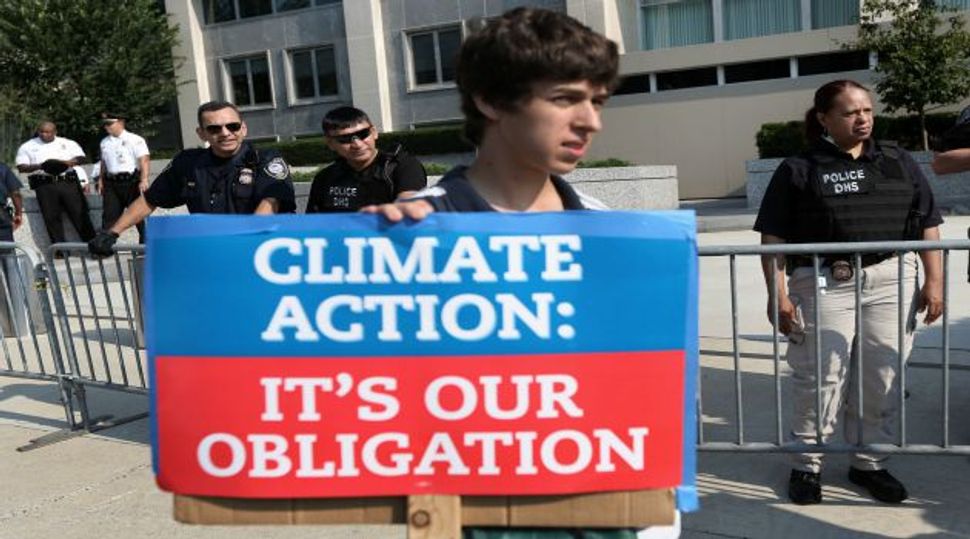 Turning up the Heat: Michael Greenberg, a Jewish college student, joins a protest against the Keystone XL pipeline in August 2013. Jewish groups are lining up behind the upcoming “People’s Climate March,” billed as the ‘largest mobilization’ of its kind. Image by Getty Images

In recent months, the 29-year-old activist has been staying up late sending emails, attending planning meetings and tirelessly trying to recruit Jewish sponsors for the September 21 “People’s Climate March” in New York City. Her work — and the work of fellow Jewish volunteers — has paid off. Of the more than 1,000 organizations that have signed on to the march, nearly 100 are Jewish, from the national BBYO youth group to the Park Slope Moishe House.

The march, billed as the largest mobilization on climate change in history, will take place just days before world leaders gather for a United Nations climate summit designed to build momentum for an as yet elusive global climate agreement. Organizers hope at least 100,000 people will join the march through Midtown Manhattan, demonstrating the movement’s growing strength and pressuring world leaders and American lawmakers to act speedily to address the climate change threat.

The march will also mark the first entry of many major Jewish institutions into the social movement that in recent years has coalesced around climate change. After the march was first announced last winter, it received early grassroots support from local Jewish synagogues, Jewish community centers and advocacy groups. The governing bodies of the Conservative, Renewal and Reconstructionist movements also signed on as march co-sponsors fairly early.

But it is only in the past few weeks that some larger groups have added their names to the list of sponsors, including the Jewish Council on Public Affairs, Hillel International, the Jewish Community Relations Council of Greater New York and the Union for Reform Judaism.

The Jewish groundswell contrasts with the last major U.N. climate conference, in 2009. That summit, held in Copenhagen, attracted a massive assortment of diplomats, nongovernmental organizations and even religious bodies — but no American Jewish delegations attended, according to Mirele Goldsmith, one of the main coordinators of Jews at the current march. To get credentials to actually enter the conference then, she recalled, she had to register as part of the Franciscan delegation (“I didn’t want to go there and just hang around,” Goldsmith said).

Even this time around, the grassroots activists feel there is room for improvement. “They came on very late,” Diamond said, referring to the larger national organizations. “It feels like they were waiting for it to be more socially accepted to sign on. I think some of the little guys had to put themselves on the line first and represent the community really well.” 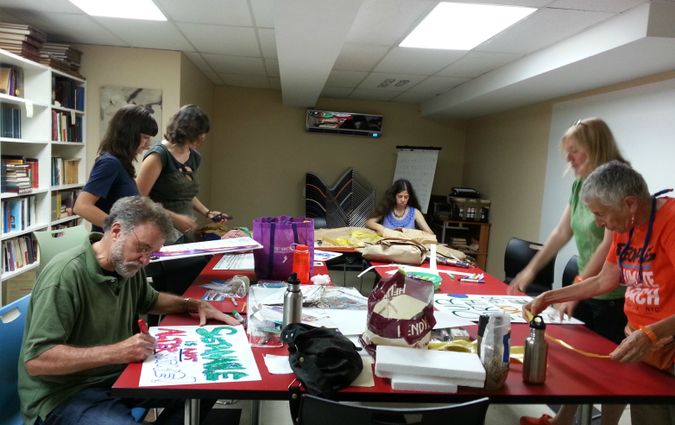 Jewish activists preparing signs for the “People’s Climate March,” which will be held September 21 in New York City. Image by Courtesy of Romemu

As director of Hazon’s Jewish Greening Fellowship, which helps Jewish organizations work on energy efficiency and promote climate education, Goldsmith decided on her own early on to try to coordinate a Jewish presence at the march. With no paid staff to coordinate all the pieces, it has been up to self-appointed volunteers like Goldsmith and Diamond to ensure Jewish participation.

Steve Gutow, the JCPA’s president, said the decision to sponsor was an easy one; he was simply out of town during the month of August, and waited to talk it over with his colleagues at the Coalition on the Environment and Jewish Life. He noted that he will be speaking at “Our Voices,” an interfaith climate event preceding the march, at which religious leaders will call for a strong international climate treaty.

Barbara Weinstein, associate director of the Religious Action Center, Reform Judaism’s political action arm, said that there was nothing sinister about the fact that the Reform movement signed on only recently. “There’s no back story there,” she said, and pointed out that Hebrew Union College-Jewish Institute of Religion, which serves as the movement’s seminary, and several Reform synagogues were early supporters of the march.

Both leaders cited their organizations’ long track record on climate change, including strong support and advocacy for climate legislation.

The Modern Orthodox movement’s top organizations, the Orthodox Union and the Rabbinical Council of America, remain absent. Rabbi Mark Dratch, executive vice president of the RCA, said his organization had not been approached about sponsoring the march. “It’s not something we’ve taken an opinion on,” he said.

Rabbi Shmuel Goldin, the RCA’s honorary president, said his organization feels “very strongly” about climate change, but is wary about signing on to demonstrations that could become “politically hijacked.”

A spokesman for the O.U. declined to comment on the march and on the O.U.’s work, if any, on climate change. A few smaller Orthodox Jewish organizations have signed up, though, including a handful of Orthodox synagogues, and Uri L’Tzedek, the Orthodox social justice group.

“I think it’s incumbent upon the Orthodox community to realize that this is an Orthodox issue,” said Rabbi Ari Hart, co-founder of Uri L’Tzedek and a rabbi at Hebrew Institute of Riverdale, which is also co-sponsoring the march. “The Orthodox community needs to show leadership to the world that we take seriously the Torah’s command to protect the earth.” Jewish groups plan to march together on September 21, joined by an expected 100 shofar players, drawing a connection between the march and the holiday of Rosh Hashanah.

Activists argue that political action is crucial right now. “In the Jewish community, most of the [climate change] focus is on what we do with our buildings, but we need to take it to the next step,” Goldsmith said. “To solve the problem we need legislation, we need international treaties.”

Noting that 14,000 people turn out annually for policy conferences of the American Israel Public Affairs Committee, Goldsmith said that “it would be nice” to see even 1,000 Jews lobbying Congress on climate change.

Longtime environmental advocate Rabbi Arthur Waskow, who was one of the march’s earliest advocates in the Jewish community, drew his lesson from the civil rights movement, which saw its largest legislative successes after its most public demonstrations. “It took action on the street to make it happen,” said Waskow, who is executive director of the Shalom Center, in Philadelphia. “I think the march in New York may be as crucial a turning point in the debate around the climate crisis as the March [on Washington] of 1963 was on civil rights.”

The major motivator is the specter of devastation that climate change — caused by carbon emissions from fossil fuels like oil and coal — promises to bring to the world. The problem has been on the public radar for well over two decades, but continues to worsen, with rising temperatures already causing drought, stronger storms, sea level rise and wildfires. A draft of the U.N.’s Intergovernmental Panel on Climate Change, obtained in August by The New York Times warns that the world is consuming fossil fuels at a pace that could soon trigger the melting of Greenland’s ice sheet, which would, over centuries, raise the earth’s sea level by 23 feet.

Murray Lantner, a 45-year-old father of two, is concerned about his children’s future. He convinced the leaders of his Conservative synagogue, East Midwood Jewish Center, to sign on to the march. Now he is organizing congregants to attend the march – alongside members of the nearby Our Lady of Refuge Church.

“I don’t recall people from the synagogue going to a march together in the recent past,” Lantner said. “It’s something new for us.”