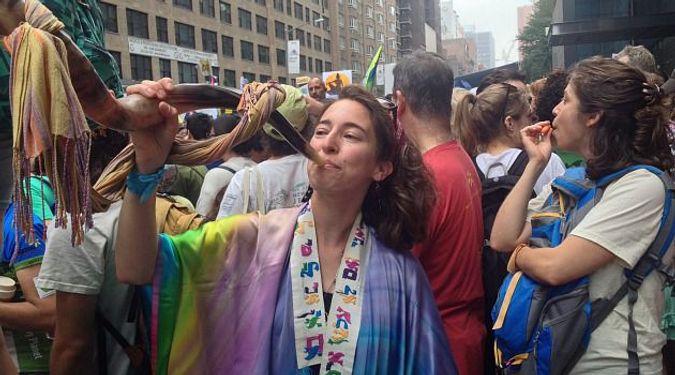 Shofar blasts rang out and ‘Save Our Planet’ signs in Yiddish peppered the streets of New York City as more than 100 Jewish groups joined the largest protest on climate change in world history.

Organizers estimated 400,000 people showed up to the “People’s Climate March” on Sunday, September 21 to protest rising sea levels caused by the burning of fossil fuels. The marchers demanded action by world leaders, who will be meeting at a U.N. summit on climate change this week.

Addressing Jewish young adults before the march, the Israeli solar energy entrepreneur Yosef Abramowitz called the day’s protest “historic and transformative,” and noted its proximity to the High Holidays.

“’Who will live and who will die?’ which we will be saying in our prayers on Rosh Hashanah, is not theoretical,” he said, noting that deadly storms and droughts will worsen thanks to climate change “What we do today and after today will determine that.”

Shofar blasts split the air at an interfaith concert held before the march, which drew a sizeable Jewish contingent. A Yiddish sign with the words “Save our planet” paraded through the air next to a poster of the snowman from the movie “Frozen,” which read “Save Olaf from Summer.”

Among the performers and speakers at the concert were Rabbi Arthur Waskow, of the progressive Shalom Center, and the singing duo Neshama Carlebach and Josh Nelson.

Jewish organizing for the march was spearheaded by grassroots activists, who succeeded in turning out a large number of protesters who had never previously attended a demonstration on climate change.

Dan Wyman, who works as a Jewish rare books dealer, was one of the first-time protesters. He decided to attend Sunday’s march with his congregation, the City Congregation for Humanistic Judaism, because he believes time is running out for a solution to climate change. “There have been enough studies and talking and debating,” he said. “We need to take action now [and] it’s up to us to make it happen.”

Laynie Soloman, a 24-year-old Hebrew College rabbinical student, called the Jewish turnout “incredible,” and noted that members of her synagogue, the Fort Tryon Jewish Center, were out in strong numbers. “It’s the first time I’ve seen our shul acting in a political way,” she said. “We can do exciting things as a Jewish community. We just have to get organized.”

The march marked the first entry of many major Jewish institutions into the social movement that in recent years has coalesced around climate change. The governing bodies of the Conservative, Reform, Renewal and Reconstructionist movements signed on to the march, though the Modern Orthodox movement’s top organizations, the Orthodox Union and Rabbinical Council of America, did not.

“I think it’s a shame that the O.U. and R.C.A. didn’t sign on to the event and show solidarity with almost every other stream of Judaism,” said Daniel Atwood, a senior at Yeshiva University, who believes that climate change is “not a big issue in the Orthodox world.”

“It might often get conflated with a broader political agenda that {Orthodox organizations] don’t necessarily support,” he added.

“There aren’t enough Orthodox Jews who care deeply about this climate issue,” agreed Orthodox activist Jessica Haller, who said she had called the R.C.A. to urge it to sign on.

Reached before the march, the O.U. declined to comment on its decision not to sponsor, and Rabbi Mark Dratch, head of the R.C.A., said his organization had not been approached. Rabbi Shmuel Goldin, the RCA’s honorary president, also reached before the march, said his organization feels “very strongly” about climate change, but is wary about signing on to demonstrations that could become “politically hijacked.”

Marchers were joined by celebrities and politicians, including actor Leonardo DiCaprio, former Vice President Al Gore, Senator Charles Schumer, and New York Mayor Bill De Blasio. They were joined by U.N. Secretary General Ban Ki-moon, who organized this week’s U.N. climate summit for world leaders in advance of further negotiations for an international treaty to be completed in 2015.

The march came only days after scientists at the National Oceanic and Atmospheric Administration announced that this summer was the hottest since record keeping began; 2014 is on track to be the hottest year on record as well.

Some protesters seemed rattled by the tide of bad news. One sign read, “The dinosaurs didn’t see it coming, either.” But others seemed exuberant at the opportunity to take action on an issue that has faced gridlock in the U.S. Congress and in previous meetings of international leaders. During the march, Jewish protesters fanned out into the crowd, many blowing shofars. Members of the Eden Village Jewish farm camp could be seen singing and dancing with a handful of pagan protesters, along with someone holding a sign for Hebrew Union College. 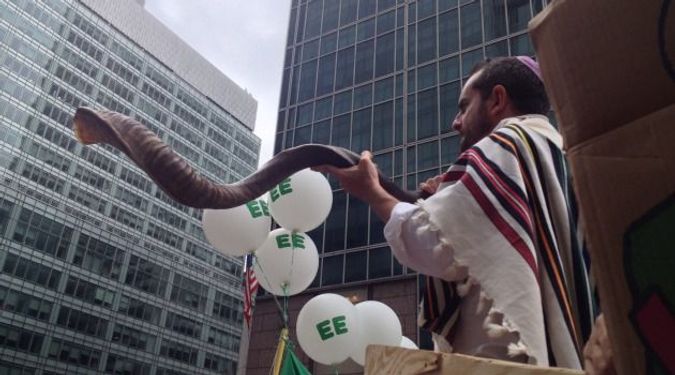