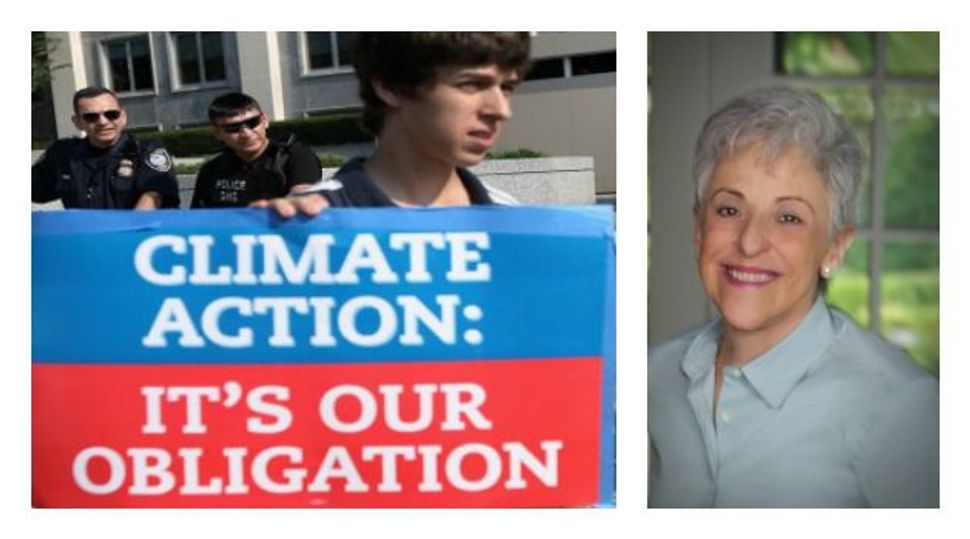 When the Rockefeller family announced in September that their charitable foundation would sell off all its would sell off fossil fuel assets, the heirs to America’s quintessential oil baron added major heft to a growing divestment campaign.

That campaign could stumble in the Jewish community, where the largest family foundation has deep, ongoing ties to fossil fuel extraction.

Lynn and Stacy Schusterman aren’t quite Rockefellers, but their charitable foundation is larger than the Rockefeller Brothers Fund, and their wealth is just as rooted in oil. The family is extensively involved in hydraulic fracturing and in deepwater drilling, two particularly controversial and risky oil and gas extraction techniques.

Scientists say that the burning of fossil fuels like oil and natural gas contributes to climate change, including rising sea levels and droughts. Efforts to convince investors and industry leaders to confront climate change have accelerated in recent years.

The Schustermans, mother and daughter, are co-chairs of the Charles and Lynn Schusterman Family Foundation. With assets of more than $2 billion, it is the largest family foundation devoted to Jewish causes, and larger than all but 31 other family foundations in the United States, according to the Foundation Center.

Recipients of the Schustermans’ grants include the student outreach group Hillel, the environmental group Hazon and the social justice group American Jewish World Service, among dozens of others, plus scores of young Jewish social entrepreneurs through the Schusterman-backed ROI Community. (The Schusterman foundation gave a $2,500 grant to the Forward Association, this newspaper’s publisher, in 2011.)

Many of the groups that receive Schusterman money sent delegations to the People’s Climate March, which according to organizers drew 400,000 to the streets of New York City on September 21 to push for action on climate change.

Yet the Schusterman foundation’s connections to oil and gas extraction are hardly discussed in the Jewish community. The recipients of the Schustermans’ grants say that they don’t see a problem.

“Hazon has never had pressure from the Schusterman foundation — or anyone else — in relation to our advocacy work,” said Nigel Savage, executive director of Hazon, which received $25,000 from the foundation in 2012.

David Eisner, president and CEO of Repair the World, a Jewish volunteering group that focuses in part on food justice, said he saw no contradiction between his group’s environmental ethic and the source of its major donor’s wealth. “We have not had the need to reflect on how our programs are influenced by the identity of the funders, except that our funders are all exceptionally well credentialed as leaders in the field of supporting Jewish programming,” Eisner said. The Schustermans gave Repair the World $2.4 million in both 2011 and 2012.

In a statement, Stacy Schusterman stood by the family business and said that her company was committed to environmental responsibility and had invested in alternative energy. “We are proud that our family business has enabled us to invest significant resources toward strengthening the Jewish future,” Schusterman wrote. “We believe abundant, affordable energy is vital to the economic wellbeing of the world’s growing population.”

The Schustermans aren’t your everyday wildcatters. Until three years ago, the family owned and ran one of the largest privately owned oil and gas exploration and extraction companies in the United States, a massive drilling concern that operated 4,000 wells across the country and had interests in a total of 10,000 wells worldwide. The firm was heavily involved in the controversial process called hydraulic fracturing, which environmental critics say could pose risks to drinking water and contribute to earthquakes. The company also was involved in deepwater oil drilling in the Gulf of Mexico, another risky practice that garnered greater controversy after the massive spill on BP’s Deepwater Horizon rig there in 2010.

The Schustermans sold their energy firm in 2011 for $7.2 billion to a group led by the private equity firm KKR & Co. After the sale, the family formed a new company, called Samson Energy, to manage deepwater drilling interests in the Gulf and land-based wells on the Gulf Coast that they had not sold to KKR.

Stacy Schusterman now serves as chairman and CEO of Samson Energy. According to Samson Energy’s website, the firm produces 5,500 barrels of oil and 95 million cubic feet of gas per day, and operates 125 onshore wells. The firm recently acquired rights to hydrofrack on 13,000 net acres of the Marcellus Shale, in Pennsylvania. Samson Energy also owns pieces of dozens of deepwater prospects in the Gulf of Mexico. The energy industry newspaper Upstream reported in August that the company was considering selling those interests, though no deal has been reported.

Meanwhile, in 2011, the Schusterman foundation, became the largest Jewish family foundation in America after receiving nearly $2 billion in stock in the oil and gas firm that the family sold to KKR. Now called Samson Resources, the company controls 2 million net acres nationwide and produces 529 million cubic feet of gas per day. A spokesman said the foundation no longer owned those shares but declined to answer an inquiry about how the $1.7 billion the foundation reported in “miscellaneous investments” in 2012 are currently held.

Given their deep ongoing involvement in the oil and gas industry, the Schustermans seem unlikely to join the fossil fuel divestment campaign. Yet the Rockefeller Brothers Fund’s announcement is just the latest success for the movement, which has gained momentum since student activists first began pushing college campuses to rid their endowments of fossil fuels in 2011.

The Rockefeller Brothers Fund, though smaller than the better-known Rockefeller Foundation, holds $860 million in assets. In recent months, 65 foundations with assets of $4.1 billion have announced their intentions to divest, and more are in the works, according to Jenna Nicholas, director of Divest-Invest Philanthropy, a group that assists philanthropies seeking to divest their fossil fuel holdings. “It’s gained a momentum beyond what we could have even imagined,” she said.

On September 22, organizers announced that 180 religious groups, universities, municipalities and other organizations, along with more than 650 individuals, have pledged to divest $50 billion worth of assets from fossil fuels.

Divestment organizers recognize that their efforts are far too small to actually affect the stock prices of oil companies. But they see divestment as a way to affect public discourse and to embarrass the fossil fuel industry for its role in causing global warming and in the lackluster effort to fund renewable energy. Divestment supporters cite the tactic’s catalyzing role in the movement against apartheid-era South Africa. Many also argue that fossil fuel companies are a poor long-term investment. Governments, they predict, will increasingly limit fossil fuel consumption to avert catastrophic climate change.

But critics question the effectiveness of divestment, arguing that activists’ time would be better spent in other ways, such as using shareholder clout to change energy corporations from within.

The divestment movement has made only modest inroads in the religious world, and met opposition in the Jewish community, where “divestment” is often associated with anti-Israel efforts.

“We should be thinking of divestment only in terms of very extreme threats of the kind that Iran poses,” Richard Foltin, director of national and legislative affairs at the American Jewish Committee, told the Forward in May.

Still, Rabbi Arthur Waskow of the Shalom Center has obtained the signatures of more than 100 rabbis on a fossil fuel divestment petition, and some local activists are working on divesting individual synagogues.

A few of the foundations that have signed on with the divestment campaign, including the Samuel Rubin Foundation, the John & Marcia Goldman Foundation and the Blumenthal Foundation, have donated to Jewish causes, though no foundations with a primarily Jewish focus appear on the list provided by Divest-Invest.

While the Schusterman foundation doesn’t focus on environmental causes, its Jewish social entrepreneurship program ROI offers an environmental track for its fellows and gives small grants to alumni’s environmental projects. Some of those alumni told the Forward that they were not worried by Schusterman’s involvement in oil and gas.

“Not all Jewish foundations can make their money making Levi jeans, right?” said Emily Freed, an ROI grantee and former chair of Hazon’s food conference. “People have to make their money somehow.”

Evonne Marzouk, an organizer of an online platform for Jewish environmentalists called Jewcology that received support from ROI, said the ROI grant’s origins was not an issue that came up while organizing the site. “I’d be surprised to find [an ROI grantee] who was really grappling with that question,” Marzouk said.

Even vocal supporters of fossil fuel divestment said that they saw no problem taking money from the Schustermans. “If Schusterman is in fact really willing to provide money to grantees who are going to work to get beyond oil and coal and [natural] gas, that’s fine so far as I’m concerned,” said Waskow, the most prominent Jewish divestment activist.

Still, he said, he hoped Schusterman would divest. “It may be harder for Schusterman, because they’re so deeply rooted in oil,” he said. “But folks who keep kosher do it even when it’s hard.”