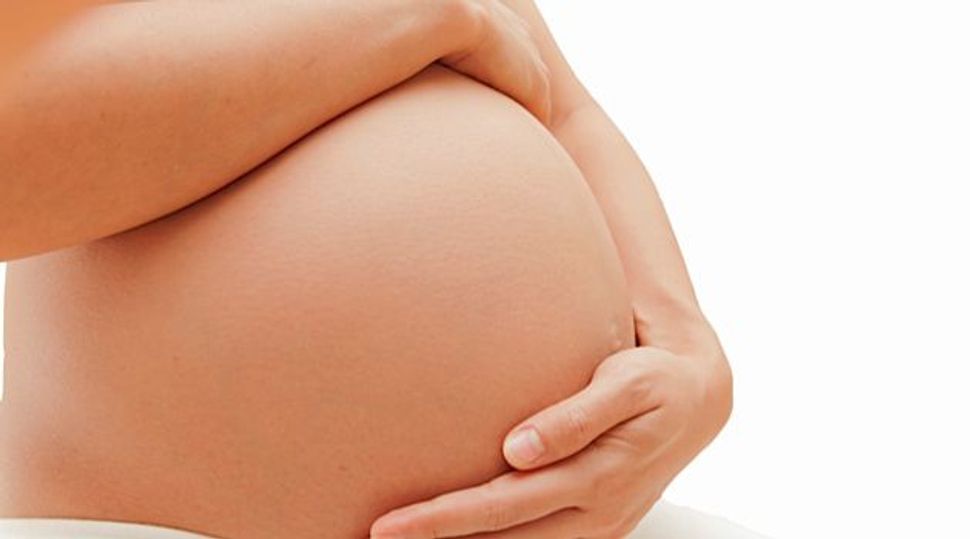 Two Doctors, Three Opinions: Only individual assessments can tell if it’s safe for an expectant mother to fast. Image by thinkstock

For those who observe Yom Kippur and atone for their sins by fasting for roughly 25 hours, not drinking often proves to be the most challenging part. But for 27-year-old Shaina, who is 12 weeks pregnant with her third child, Yom Kippur won’t differ much from other days: “It’s not a nerve-wracking thing for me, because I’m always dehydrated,” said the Chabad Hasid who lives in the Crown Heights section of Brooklyn. “I get morning sickness all day.” On normal days, she adds, she has to force herself to drink.

The Day of Atonement is among the most widely observed holy days among Jews in the United States. That’s partly because the Jewish law grants few exceptions: If you’ve been bar/bat mitzvahed, and you’re healthy, you have to abstain from eating and drinking, washing and applying creams, having sex and wearing leather shoes.

The situation is more complicated for pregnant women: Rabbis across the denominational spectrum agree with doctors that expectant mothers must eat if the pregnancy is a high risk one. And then there are cases like Shaina’s (who doesn’t want to give her last name because she prefers not to publicize her pregnancy before the fifth month) where the pregnancy is normal, the woman healthy and there is no history of preterm delivery. Here it is up to doctors and rabbis to make case-by-case assessments — but the science they are relying on is anything but decisive.

A new study, published in August, suggests that fasting on Yom Kippur might put women at risk for preterm delivery. Eyal Sheiner, director of the Maternity Department of the Soroka University Medical Center, in Beersheba, Israel, and his colleagues found that Jewish ethnicity was an independent and significant risk factor for preterm delivery (defined as delivery before 37 gestational weeks).

The paper, which was published in the Journal of Maternal-Fetal and Neonatal Medicine, compared the rate of preterm deliveries during Yom Kippur and the corresponding day one week earlier at the Soroka Medical Center, including 1,300 deliveries in total. Of the 47 preterm deliveries recorded on Yom Kippur, 62% were by Jewish women and 48% by Bedouin Muslim women.

“If the patients consult me, my recommendation is not to fast,” Sheiner said, adding that preventing dehydration is the most important aspect. His study did not actually ask whether women fasted or not, but assumed that the majority of Jewish women fasted, since the population in Beersheba is traditionally more religious. The small sample size is another weakness of the study.

“Not enough data were provided to make any change in the halachic determination of who should fast,” said Aaron Glatt, a physician who is the associate rabbi of the Orthodox Congregation Anshei Chesed in Hewlett, New York. Instead, he insists that Halacha and medicine align: The Jewish law allows for those who are unable to fast to have pokhos mikeshiur, a smaller amount than is prohibited, which usually consists of no more than a mouthful of fluids or solids in roughly nine-minute intervals. If the medical situation makes this impossible, normal eating and drinking are required.

“Judaism holds life to be the most sacred thing,” said Rabbi Victor Appell of the Union of Reform Judaism, adding that he advises pregnant women to consult their doctors. “I don’t see this as a place of conflict.”

“Most women in the Conservative movement talk to a doctor who says don’t fast and they don’t,” said Rabbi Gail Labovitz, an associate professor of Rabbinics at the American Jewish University, and author of a rabbinic responsum on whether a person who cannot fast may lead prayer services. A mother of two, she didn’t fast during her pregnancies but says that Orthodox women would be more likely to at least try fasting.

Gila Leiter, an attending physician and associate clinical professor in the Department of Obstetrics, Gynecology and Reproductive Science at Mount Sinai Medical Center, in New York, suggests that fasting and dehydration may trigger contractions, concurring with Sheiner.

Leiter gets about 200 calls before every fast day, and talks to rabbis regularly. She says that it’s important to make individual assessments as to whether a woman can fast safely. To women at risk for preterm labor, as well as those Leiter defines to be high risk (which means that 25 hours of decreased nutrition may be significant), she recommends to follow the halachic rules for regular intake of food and water. “In my practice I include women who have diabetes, hypertension, kidney stones, recurrent cystitis and even advanced maternal age,” Leiter said, adding that this encompasses well over half of her patients.

Another theory suggests that the one-day fast could function as a stressor: When pregnant women do not eat, their blood sugar levels drop very quickly, which results in a stressful state for the body. When in stress, the adrenal glands produce the hormone cortisol. In pregnant women, cortisol stimulates the placenta to produce a hormone known as CRH, or corticotropin-releasing hormone, which can trigger contractions and subsequently, delivery.

“Now whether it’s fasting that’s the stimulus or maybe there’s a stimulus, such as psychosocial stress, going on for many months, and that additional stress [of fasting] for one day makes a difference, I really don’t know,” said Calvin Hobel, an obstetrician-gynecologist at the Cedars-Sinai Medical Center, in Los Angeles, and the author of several papers on stress and pregnancy.

Hobel suggests that many pregnant women can observe the one-day fast without a problem. Like Leiter, he points out that the difficulty lies in identifying those who are at risk: “Fasting is only one of the many, many stressors we have.”

But what if it’s not the fasting that has an effect on delivery — but everything else that’s going on during the Holidays?

A few years ago, Samuel Lurie of the Department of Obstetrics and Gynecology at the Edith Wolfson Medical Center, in Holon, Israel, came across a study titled “Fasting and the Precipitation of Labor. The Yom Kippur Effect,” which first documented an increase in the number of term deliveries in the 24-hour period after the termination of the fast. It was discovered by Michael Kaplan and his colleagues at the Shaare Zedeck Medical Center, in Jerusalem, and published in The Journal of the American Medical Association in 1983.

“When you find an effect, the main question is whether you can explain it,” Lurie said, adding that a solid theory to explain Kaplan’s findings is lacking. He co-wrote a follow-up study in 2010, comparing the birth rate on the day after three holidays during a four-year-period — Yom Kippur, the fast day Tisha b’Av and the first day of Passover — to control for the effect of special prayer services and being out of work. When they compared the mean birth rate after Yom Kippur and Tisha b’Av to the average number of deliveries on that day per year, they found no significant difference. To fast or not to fast, says Lurie, is a religious decision. What helps is keeping stress levels low — like Shaina does: She has a babysitter lined up for the day.

Anna Goldenberg is the Forward’s arts and culture fellow and editor of the Fast page.