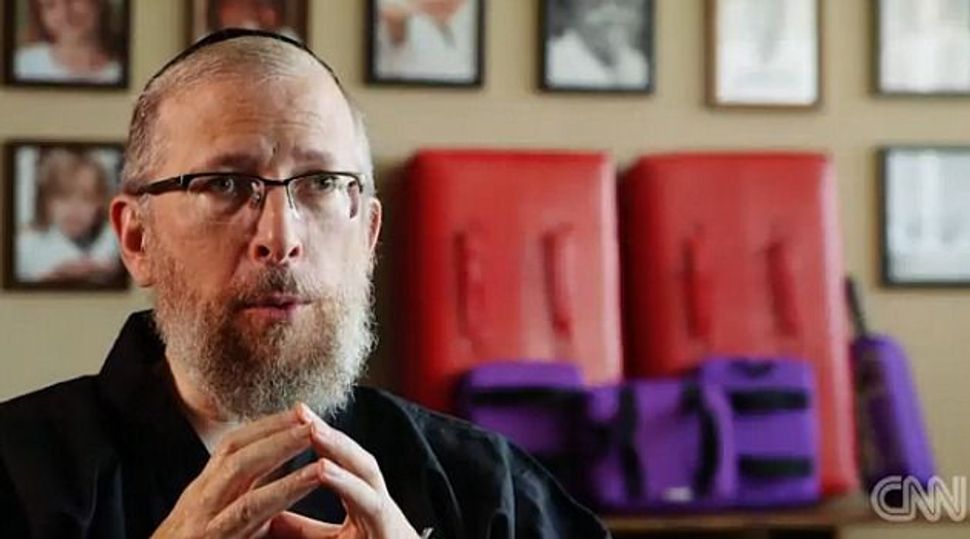 Some people break down in the face of personal tragedy. Others become heroes to someone else.

Rabbi Elimelech Goldberg, aka Rabbi G., chose the latter path. After his first daughter, Sara, lost a battle with leukemia just after her second birthday in 1981, Goldberg could’ve shut down. Instead, he chose to help other children with cancer and their families. In 1999, he founded Kids Kicking Cancer, which helps children battling serious illnesses by using martial arts to manage pain during treatment.

Now, after three decades of serving the community, Goldberg is a finalist in CNN’s Global Hero competition for his international charity work. The Global Hero competition serves to honor regular people doing good in this world. Voting is open to the public until November 16. The winner, who will be announced December 7, is awarded $125,000 for their charity.

The idea for Kids Kicking Cancer was born one summer while Goldberg was working at Camp Simcha, a Jewish camp for kids with cancer. He tried to comfort a five year old camper who was in pain during one of his treatments. A blackbelt in Choi Kwang Do, Goldberg helped the camper in a way that he knew how, and offered to teach the kid some of the ancient martial art skill. He taught the boy some breathing techniques to ease the pain during treatments. It worked- when the nurse removed the needle after chemotherapy, he said the boy hardly noticed.

Goldberg realized he might be able to help a lot more kids this way.

“In martial arts, you learn that pain is a message that you don’t have to listen to,” he said in an interview with CNN for the Global Heroes competition. “That lesson is so unbelievably effective.” That’s what he taught his five-year-old camper, and that’s what he teaches the kids in his program.

The program first teaches kids these simple breathing exercises, and then, once they have them down, the kids graduate to other Choi Kwang Do techniques. “We use martial arts as a platform for meditation,” Goldberg explained, “and to allow children to gain these tools so that much of the fear, the anger and trauma that accompanies pain is tolerable.”

The breathing exercises, specifically, are to teach the kids to hold on to happy memories and let go of negative feelings, nine-year-old Haley Wallace, a member of Kids Kick Cancer, explained in CNN’s video documentary. “When the children demonstrate that they can bring in the light and let out the darkness through a series of breathing exercises, it changes people,” Goldberg said.

Kids Kick Cancer began in Michigan and has since expanded its programs to New York, Los Angeles and Florida and internationally to Italy, Israel and Canada. To date, Goldberg’s classes and one-on-one support have helped more than 5,000 children. They provide a number of free services such as support during clinical procedures and hospitalization, and special home visits as needed. Kids Kicking Cancer also provides services to the whole family, not just the child diagnosed with cancer, through special family focused events, and sibling support groups.

Goldberg finds it especially important to remind the children of all they’ve accomplished towards the end of their lives. When patients are terminally ill, Goldberg’s organization gives the child a black belt in a ceremony with the patients’ family and friends.

“When we give children this black belt, we embroider the child’s name on one side and the words ‘master teacher’ on the other,” Goldberg said, “because they really are teaching the world.”