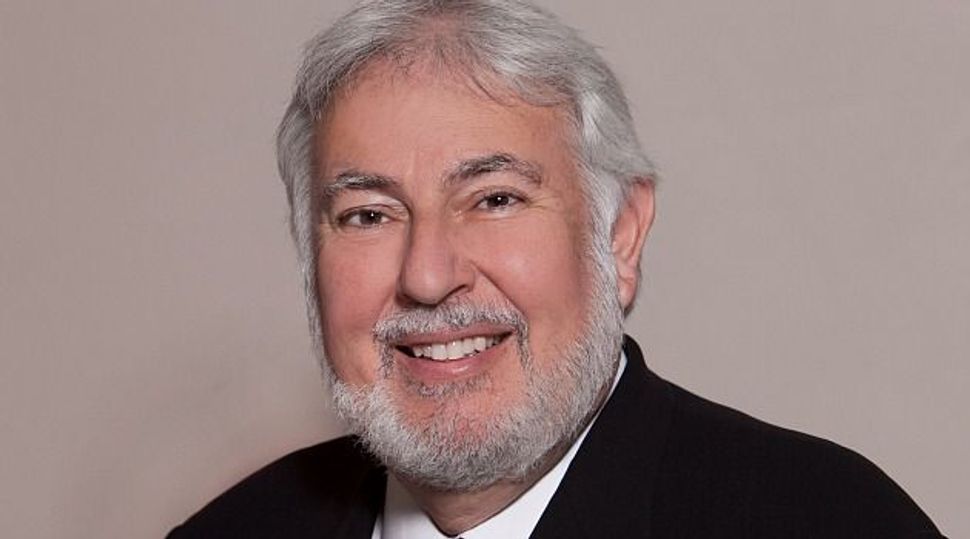 Shocking Sermon: Rabbi Shalom Lewis delivered a side-winder of a Rosh Hashanah sermon. It’s not the first time he has shocked from the pulpit.

This was likely the first time a Rosh Hashanah sermon was covered by Iran’s national TV.

“An American rabbi has called for the genocide of all Muslims,” said the announcer on PressTV, Iran’s English language government-run network.

And while this report grossly misrepresented the words of Rabbi Shalom Lewis, his [sermon]( http://www.frontpagemag.com/2014/rabbi-schlomo-lewis/ehr-daw-theyre-here/?utm_source=feedburner&utm_medium=feed&utm_campaign=Feed%3A+FrontpageMag+(FrontPage+Magazine+%C2%BB+FrontPage ‘sermon’) on the second day of Rosh Hashanah was explosive enough to explain the national and international attention it brought to him and to his suburban Conservative synagogue just outside Atlanta.

Speaking to nearly 2,000 congregants attending High Holiday services at Congregation Etz Chaim in Marietta, Georgia, the veteran rabbi delivered a 10-alarm warning about the threat that he sees posed by Muslim extremists. He urged, in the harshest of tones, a U.S.-led war against violent Islamist groups, including some that are at war with each other and others that have launched terrorist attacks against Israel on the grounds that Israel has usurped their land, but which have avoided attacks elsewhere.

Lewis declared, “The fury of ultimate evil is upon us and we must act — not to contain it. Not to degrade it. Not to manage it. Not to tolerate it, but to exterminate it utterly and absolutely.”

The rabbi defined this war a “holy crusade,” and referred to adherents and sympathizers of these groups in terms that appeared to place them outside humanity.

“We are dealing with a moral species that eats its own, kills its young and celebrates innocent death as homage to God,” he said. “These Islamist criminals are unlike us in the most basic of ways and we have yet to accept and understand their total immersion in moral debauchery.”

“It would be wise for him to walk it back and to make clear he was not calling for any murderous rampage directed at any sect of Islam,” said Moline, who is now executive director of the National Jewish Democratic Council. He added: “Terms such as ‘extermination’ shouldn’t be used by a rabbi.”

High Holiday sermons are prime time spots for pulpit rabbis, who have a captive audience made up of almost all their congregation’s members. Their talks, as a rule, are prepared well in advance and carefully crafted to leave a lasting impression on congregants, many of whom will only visit the synagogue once or twice a year.

“It’s a fine art of balancing between speaking your mind and making sure it doesn’t fall on deaf ears,” said Rabbi Stuart Weinblatt of Congregation B’nai Tzedek in Potomac, Maryland. He noted, however, that many congregants appreciate when their rabbi takes a strong stand, even if they disagree with it.

For Lewis, the congregation’s response was no problem. He received a standing ovation and lengthy applause. But once posted on the web, the sermon sparked an Internet firestorm that overwhelmed him. Nevertheless, Lewis made clear he has no intention of retracting a single word.

“Not one word. I regret not one single word,” he told the Forward in an October 6 interview. “Everything that is in there reflects my passion, my feelings and what I believe is the moral truth and so no, I have no regrets.”

He argued that criticism of his speech came from “the evil-doers in this world, the terrorists, the savages in this world,” and said he viewed their attacks on him as proof that his sermon hit a raw nerve, “and I’m proud of that.”

Lewis did add, however, an important caveat. He made clear he was calling for a war against radical Islamists, a group that he estimates represents only 5% of Muslims in the world, not against all Muslims. “Five percent of a billion is 50 million Koran-waving, Allah Akbar-howling Muslim murderers out there planning to slit our throats, blow us up or forcibly convert us,” he said.

But the Atlanta rabbi still had some harsh words for the remaining 95% of Muslims, comparing them to Germans who did not stand up to the Nazis during World War II. “Where are they? A silent partnership is no partnership.”

“They” also include Muslim-Americans. Lewis told the Forward that Americans “cannot ignore the fact that there are insidious evil forces within our borders that need to be acknowledged, recognized and dealt with.”

In fact, many Muslims across the world have spoken out and taken action against radical Islamists, and in the last few months, against the group known as ISIS in particular.

Indonesia, the world’s largest Muslim country, with some 205 million who claim the religion as their own, has banned any pro-ISIS activity in the country. The government clamped down years earlier on domestic al-Qaeda affiliates, as well. The country’s president, Susilo Bambang Yudhoyono, called ISIS’s violence “a new wake-up call to international leaders all over the world, including Islamic leaders.”

Several Middle East Muslim states have joined the American-led coalition fighting ISIS in Iraq and Syria, including Saudi Arabia, the United Arab Emirates, Qatar and Jordan. In America, the Council on American-Islamic Relations and the Islamic Society of North America, two of the country’s largest Muslim organizations, have issued repeated condemnations of terrorism, and of ISIS and al-Qaeda specifically.

On September 24, CAIR issued a letter signed by Muslim leaders and prominent scholars rejecting the ideology of ISIS and calling on its supporters to repent.

Lewis’s sermon was first reported by the Mondoweiss website and was quickly picked up by Muslim and Arab sites across the world. Some presented it as evidence of a Jewish wish to rid the world of Muslims. Anti-Muslim activist Pamela Geller took issue with these claims, arguing that Muslims have no reason to take offense at being compared to Germans under the Nazis.

Lewis painted in vivid colors a picture of the radical Islamic threat to America and the world, as he views it, warning that Europe is “returning to the dark ages” and is facing a “dystopian future” in which the Sistine Chapel will be demolished, Botticelli’s paintings will be torched and the Guttenberg Bible will be “tossed into the bonfire.”

“This is not a time for delicacy; for tiptoeing,” Lewis said. “It is not a time to parse words nor worry about offending someone with unfiltered vocabulary.”

He faulted Muslims in his speech, among other things, for making airport security a daunting experience. “Who has created a tedious need for us to remove our shoes and belts, empty our pockets, pack only 3-1/2 ounces of Listerine, go through metal detectors and x-ray machines, submit to frisks and wand searches?” Lewis asked, and answered rhetorically: “Not the Italian Mob, not skin heads, not neo Nazis, not Columbian drug cartels, not the Russian mafia, not the Crips nor the Bloods nor the Aryan Brotherhood, not the Ku Klux Klan.”

Radical Islam is not a new passion for Lewis. Three years ago he used his pulpit to warn congregants that “they are coming.” This year, he told listeners, “They are here.”

Despite the online uproar, Lewis’s sermon did not garner any adverse reaction within the walls of Congregation Etz Chaim, or in the broader Conservative Jewish community. One local rabbi noted that he was not surprised by the supportive response, since Lewis is known to hold hawkish views and since his congregation is politically conservative.

Michael Horowitz, president and CEO of the Jewish Federation of Greater Atlanta, said the sermon did not seem to stir a debate in the community, which he described as having a “wide range of views and backgrounds.” Horowitz declined to comment on the content of Lewis’ sermon.

Lewis joined Congregation Etz Chaim, which has 600 member families, in 1977, two years after its founding, and later became senior rabbi. Last month he announced his plan to retire in 2017 and assume the role of rabbi emeritus.

His sermons have never shied away from politics. In his Rosh Hashanah address Lewis called President Obama’s response to this summer’s military clash between Israel and Hamas “amateur hour” and said, “the bad guys were licking their chops.”

For Lewis, his sermon this year and in 2010 are attempts to tear down the wall of political correctness that he believes prevents discussion of the problem of radical Islam. “There are limits to multiculturism,” he said. “There are limits to what is acceptable and not everything in every culture is moral, is ethical and is right.”

But is the High Holiday sermon the appropriate setting for issuing an outright call for war in multiple countries against a diverse array of different groups and governments?

Lewis believes it is, while others disagree.

“He raises important questions,” said Weinblatt, “but there was a harshness to it that made it very discomforting.”