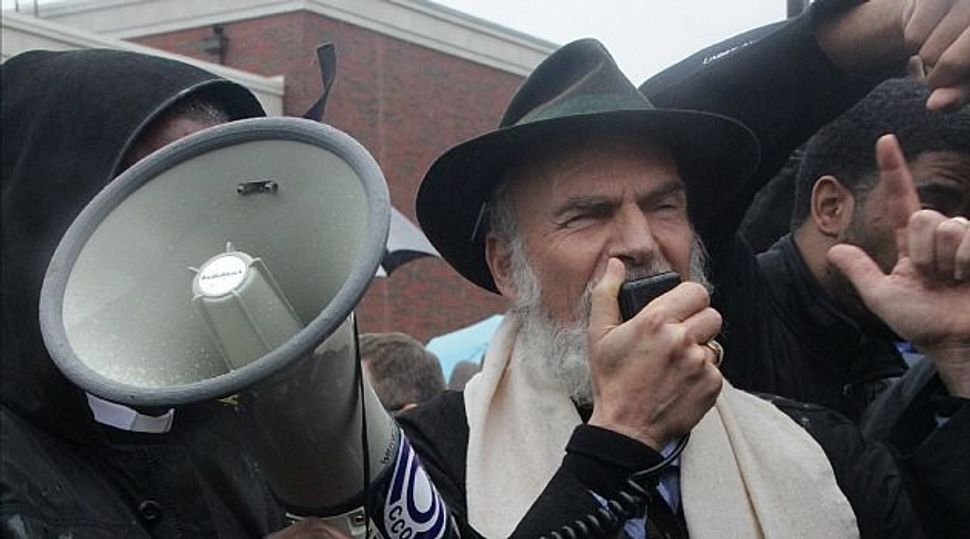 Outside the Ferguson police station, under a steady rain, the rabbis were asking the cops to repent.

“We repent for the sins of our community, not only for the things we personally did,” Rabbi Jill Jacobs told one officer. “I asked him if he would join me in repenting, and he didn’t really respond.”

Two months after the shooting death of Michael Brown by a Ferguson police officer, the protest movement in the St. Louis, Missouri suburb shows no sign of ending. A grand jury has yet to indict the officer, Darren Wilson, for shooting the unarmed black teen. And in early October, a St. Louis police officer shot another black teen to death under unclear circumstances, giving the movement new energy.

Rabbis from outside of the St. Louis area have stayed away from the protests in Ferguson, leaving them to local leaders and activists. But that changed October 12, when 20 rabbis joined dozens of clergy members for a series of actions protesting what they see as a pattern of police impunity.

The goal was to get arrested.

“It was clear they didn’t want to arrest clergy,” said Jacobs, executive director of T’ruah, a rabbinic social justice group, of police at the October 13 protest outside of the Ferguson police station.

Some clergy did go to jail, though all of the rabbis remained free. Rabbi Susan Talve, the spiritual leader of Central Reform Congregation in St. Louis, who has been a regular presence at the Ferguson protests, was driving to prison to visit a group of arrested ministers when she was reached by the Forward.

“I want my sisters to know I’m here,” Talve said.

Talve’s synagogue is near Ferguson. One 16-year-old black congregant lives in the town.

“He just wants to go to school,” she said of the teenager. “He also doesn’t want to be afraid that when he walks on the street at night, that he’s going to be provoked, profiled and harassed because of the color of his skin.”

Talve said that Jacobs and others had been asking her how to support the Ferguson protest movement since the beginning, but that she had waited for an appropriate moment to invite them to come in. The civil disobedience at the police station was part of a series of events called Ferguson October meant to draw national attention to the ongoing protests.

Jacobs said that she and her colleagues from outside of the area felt that they, too, had a role in countering the discrimination in Ferguson. “We know what it’s like to be singled out because of our religion, because of the way we look, so we have an obligation to stand with other people in the same situation,” Jacobs said. “It’s incredibly important to break out of this us/them dynamic. This is about the Jewish community and every community.”

Outside the police station, activists chanted while some confronted the officers.

“We had clergy of all faiths going up to the police officers and asking them to repent for their part in the system that led to the death of Michael Brown,” Jacobs said.

Some Christian clergy offered to take confession. Jacobs said that she spoke to two unflinching riot police who would not engage with her. Talve spoke to a Catholic officer who did not accept her premise.

“He said he didn’t have anything to be sorry for, to repent for,” Talve said. “I said, I’m sure you’re a good man, you’re doing holy work… but we’re all part of the system.”

The protest was designed as a civil disobedience action, but the unwillingness of the officers meant that the rabbis stayed out of jail. “They wouldn’t arrest me,” Talve said. “We tried.”

CNN reported that 43 people were arrested outside the police station, including Cornel West, the academic and activist.

The weekend was not without tension among the activists. At a rally on the evening of October 12, local youth leaders protested when speakers from outside Ferguson were given priority, calling for their own chance to speak. 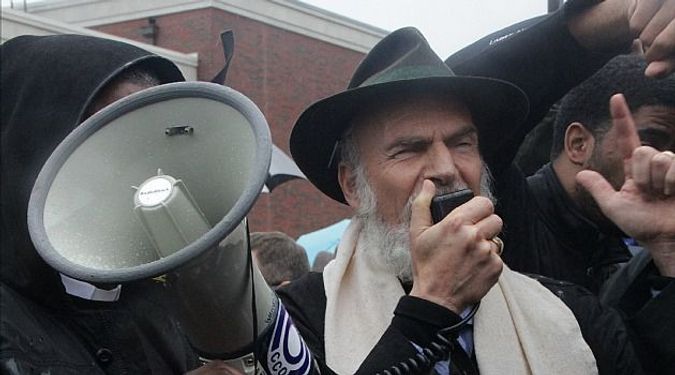