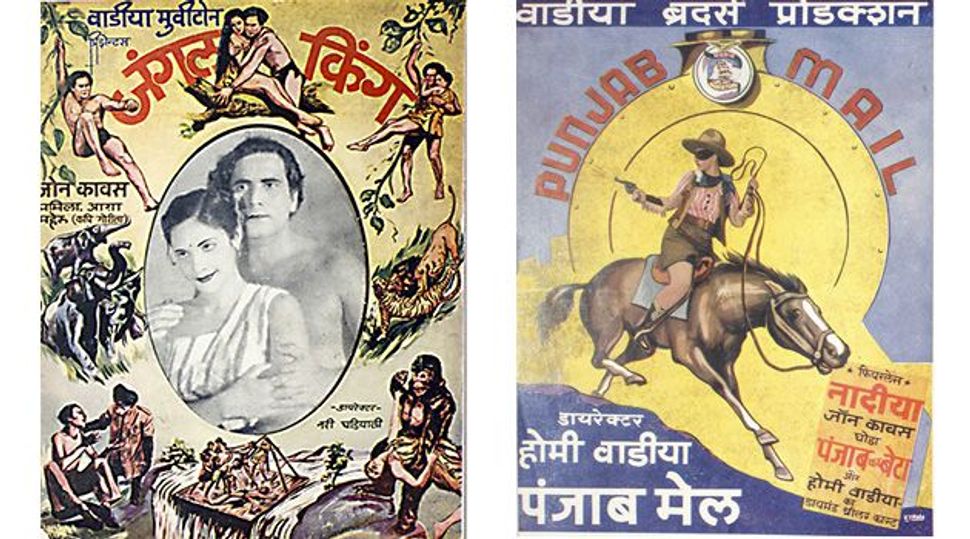 Treasure Trove: Above, Esther ‘Pramila’ Abraham in ‘Jungle King’ (1939). Below, ‘Punjab Mail’ (1939), another film poster in the archive. Image by courtesy of recalling Jewish Calcutta

“Jews in India?” people exclaim when the concept is mentioned. With fewer than 30 members of the community left there, it’s sometimes hard to recall that a place like Kolkata, formerly known as Calcutta, was once the site of a thriving Jewish community.

Jael Silliman, a scholar and, at age 59, the youngest of this tiny enclave, is determined to keep their memory alive. The result of her efforts is a newly launched online archive, “Recalling Jewish Calcutta,” on the history of the Jewish experience in India.

Calcutta’s Jews were relative newcomers in comparison with their co-religionists in Mumbai and Cochin, the two other places in India that had significant Diaspora communities. While Jews in those cities trace their arrival as far back as the destruction of the First Temple, Jewish merchants and traders from Iraq and surrounding regions immigrated to Calcutta during the period of the British Raj. The first Baghdadi (the ethnic term used by Jews in India) Jews arrived in 1798.

Though never numbering more than 3,000 or 4,000 in a city that had a population of 100,000 in the early 19th century (and more than 14 million today), the Baghdadi Jews had an outsize impact on life in the capital of British India. From establishing schools, hospitals and some of the longest-running shops to starring in Bollywood film productions, there was hardly an aspect of public life in which they weren’t involved.

The Jewish Girls’ School, though, hasn’t had a Jewish student in 40 years. And the bakery Nahoum and Sons — the source of one of Calcutta’s favorite delicacies, the plum cake — is now run not by its Jewish owner, but by the owner’s Hindu friend. The last time the community reached a minyan, the quorum of 10 men required for prayer, was almost two years ago, when the Israeli ambassador to India and five other Jewish men flew in from Delhi to take part in Simchat Torah rituals.

The community began to shrink in the second half of the 20th century. Many immigrated to Israel with its establishment in 1948 — some because of Zionist sentiment, others because of uncertainty in the wake of Indian independence the previous year. Others have immigrated to Europe and America since, some as war brides of the hundreds of refugees who flooded the city during World War II.

A direct descendant of Shalom ben Obadiah HaCohen, who was a court jeweler to the Nawab of Awadh and the first Jewish immigrant to arrive in Calcutta, Silliman felt the need to document that colorful history. “Many of the remaining members of the community, mostly living abroad, are in their 80s and 90s,” she said. “I realized that if I didn’t collect their photos, memories and other materials relating to Jewish Calcutta now, so much would be lost.”

Silliman, a scholar specializing in activist movements and feminist politics, began spending most of her time in what is now Kolkata a few years ago, after almost 30 years abroad, and embarked on an informal project of gathering photographs and documents, recording oral histories and making videos with the city’s remaining Jewish residents. Her focus was on everyday life — clothing, cooking, customs — as well as on the physical and cultural traces left by the Diaspora on Indian culture writ large.

Amlan Das Gupta, a professor of English at Jadavpur University, made it possible to establish an online archive of this material. Together with his students, who were working on a project that would document Colonial Calcutta and was funded by a grant from the Sir Ratan Tata Trust, he assisted Silliman in gathering materials and designing a website.

As a result of the community’s exodus after 1947, much of the material Silliman needed to track down was scattered across the globe. She found that people were generous in their support. “These 80- and 90-year old men and women were going through their photographs and scanning them to send to me. Imagine the level of technical knowledge they had to acquire to do that!” she said.

The result, “Recalling Jewish Calcutta,” is a treasure trove. It includes the story of the establishment of the Jewish cemetery in the early 19th century, on the occasion of the first death in the community; the cemetery was bought in exchange for a gold ring, though the owner of the land had offered it for free. There is a video of Silliman’s mother, Flower Silliman, preparing a Baghdadi meal for the Jewish Sabbath, along with recipes for specialties like aloo-makala, a deep-fried crisp potato. An audio recording features Eddie Joseph, the first magician to perform on the radio, on the national All-India station in 1933.

Silliman found the discovery of the lives of Diaspora women most fascinating. “I had always thought of my world as quite boring, with all these old fuddy-duddy, old-fashioned ladies,” she said. But she was amazed when she learned more stories: “A Jewish woman was the first woman to make an application to argue in Calcutta’s law courts. Pramila [Esther Victoria Abraham], one of the very well known Bollywood actresses and the first Miss India, was a Calcutta Jew.” (In fact, there were several Baghdadi Jews — some from Bombay — who were important figures in Bollywood.)

As Silliman is a recently appointed Fulbright-Nehru scholar, her efforts are no longer self-supported. This will allow her to expand the archive by conducting interviews that show an outside perspective on the importance of Jews in Calcutta. “I was talking to someone as part of my new research project on how people — including Parsis, Armenians and Anglo-Indians — remember Jewish Calcutta, who said to me, ‘This isn’t just the history of Jewish Calcutta, it’s the history of Calcutta — it’s all of our histories’,” Silliman said.

The response to the archive throughout India has been one of overwhelming interest; a number of major Indian newspapers covered its launch this year. “Some people are fascinated because they didn’t even know there were Jews in their city. But for others it’s of particular interest and it’s nostalgic, because it’s part of the cosmopolitan history of India, and even more so of Calcutta,” Silliman said. “This was a city that was home to Jews, Portuguese, with Burmese, Chinese, Anglo-Indians, Parsis, Armenians, Goans…. Many of those communities are no longer here, but whatever history remains is very important.”

Indeed, the pride that many Indians have about their country being a pluralistic, open-minded and tolerant society — and the peaceful existence of the Jews as an example of that — has intensified after the 2008 attacks by Pakistani gunmen in Mumbai, which killed more than 160 people. The Mumbai Chabad House was targeted as well; the rabbi and his wife were among the dead. Their Indian nanny saved the couple’s infant son; the two now live in Israel. The center reopened this past August and is guarded around the clock by Indian security forces.

When asked whether there is a melancholic element to documenting a disappearing community, Silliman responded cheerfully. She explained that as anti-Semitism increases around the world, there is a necessity “to see what a wonderful place India was for the Jews.” In the space of 200 years, these immigrants took prominent roles in every aspect of public life, and it wasn’t anti-Semitism that made them leave. “That’s important to remember, that there were places like that for us,” Silliman said.

Aruna D’Souza is the editorial director at RiffleBooks.com and writes about food for Kitchen Flânerie.