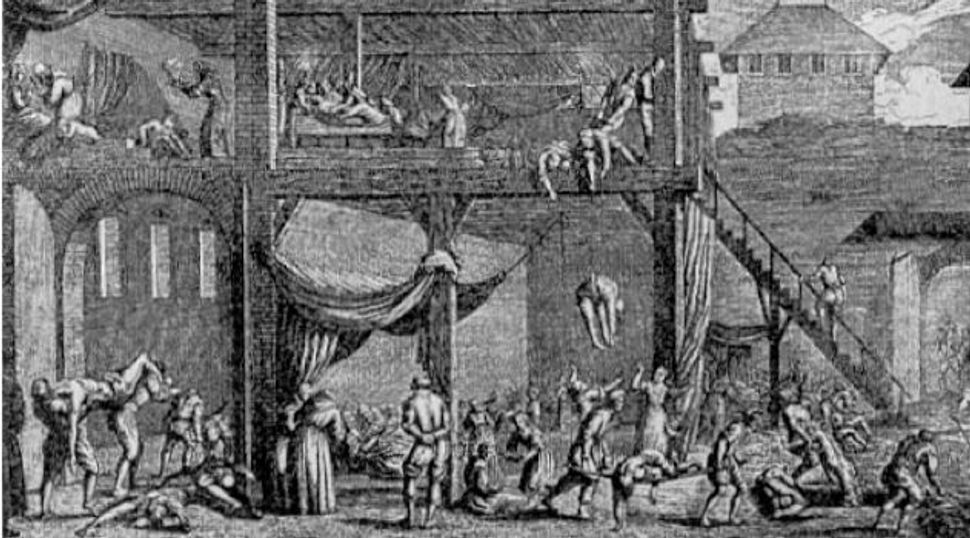 A Plague: A contemporary engraving of a hospital for plague victims during an outbreak in Vienna 1679. Image by Wikipedia

With the arrival of the Ebola virus on American shores, public conversation has shifted from fears of contagion to a focus on the ethics of quarantine and the rights of the contained. Quarantine is an ancient form of medical precaution, predating immunization by centuries. Its implementation, however, has never been strictly clinical. The question of who is quarantined is often bound up with pre-existing prejudices, and represents a field on which existing concerns over differences of race, religion and geographic origin are played out, confronted, tested and occasionally even rejected.

In 1713, during the last great outbreak of the plague in Europe before its near-total disappearance (for reasons still not fully known), the Jews of Prague found themselves the subjects of such special scrutiny. Prague was a bustling Jewish metropolis; it had more than 11,500 Jewish residents, more than a quarter of the city’s total population. It was also dirty, cramped and crowded — walled-in, with only six gates offering access between the Jewish quarter and the rest of the city. When disease appeared, it arrived with special ferocity among the Jews, a ferocity noted by the city’s political and medical authorities alike.

The plague claimed its first victims in July, and by mid-August the containment of the Jewish population was complete. Imperial authorities ordered that the Jewish ghetto be boarded up, with only a small door to give access. Healthy Jews were sequestered in newly constructed barracks. The sick were placed in hospices outside the city limits.

Three poems, written in Judeo-German (a linguistic relative of Yiddish), tell of the deaths in the tens and hundreds in a single day. They share the cries of the sick and the mourners mingling, and evoke a stench of bodies so powerful that they could not be approached to be buried with last rites. The ghetto was so denuded of resources that men stripped houses for boards to build coffins, and women labored day and night to weave burial shrouds. As the holidays of the Jewish new year in September approached, festivals and mourning became indistinguishable: death and decimation loomed over the community.

Although conditions within the sealed ghetto were grim, royal ordinances directed toward limiting Christian contact with Jews could be seen as a form of protection (if also repression). Rather than seek expulsion of the Jews, the response to the plague wove them more fully into the administrative structure of the city and empire. While the quarantine played upon pre-existing discrimination and segregation of Jews from Christians, it also was the result of a concerted effort to isolate the contagion among a community where it seemed particularly rampant, an effort in which civic authorities and Jewish community leaders cooperated.

Moments of biological catastrophe can also inspire redemptive human cooperation across the lines that divide us. Although Jewish memory preserved the fears of medieval persecutions following the Black Death in 1348, contemporary poems and songs from 1713 note that “many Jews received the favor of the authorities,” who took them under their protection. University medical faculty repeatedly dispatched doctors to the Jewish quarter. When tavern operators barred even healthy Jews from entry for fear of contagion, Jewish leaders lodged complaints with the Prague palace, and the imperial offices lent their support by asserting the legitimacy of “health passes.”

In fact, the extreme measures taken to keep apart Jews and Christians actually highlight just how intertwined the two communities were, despite their official separation. In addition to sealing the ghetto, royal authorities cautioned against the presence of Jews and Christians in each other’s homes, especially “those healthy Jews” who in leaving the city feared for the belongings they would necessarily leave behind and deposited their goods not with their own co-religionists, but with Christian householders, in the healthier areas outside what was known the Jewish Town.

While the 20th century abounds with stories of neighbors eagerly appropriating the homes and possessions left behind by the expatriated, Jews in early modern Prague evinced a trusting relationship and a willingness to leave those possessions with their neighbors. They clearly anticipated a return and felt solidarity with Christians of their own class, who they trusted.

By the time the plague receded, in 1714, a third of the city’s total population was lost. Within a few years, new agitation for limiting — but not eliminating — Jewish settlement would begin. But the attempts to contain, quarantine and separate shed light on the daily contacts and collective mentalities that bespeak a world marked not solely by segregation and fear, but also by coordination and cooperation, and the aspirations for a swift return to normalcy.

The current debates about Ebola — concerning the dividing line between public welfare and personal freedoms, between global contagion and local confinement — are actually part of an ancient and ongoing conversation about public health that touches on Jews as well. Jewish history, like the history of other minorities, reveals that contagion can amplify fear and separate people, but it can also bring people closer together to create new medical, civic, and social advances.

Joshua Teplitsky is an assistant professor in the Department of History and the Program in Judaic Studies at Stony Brook University.