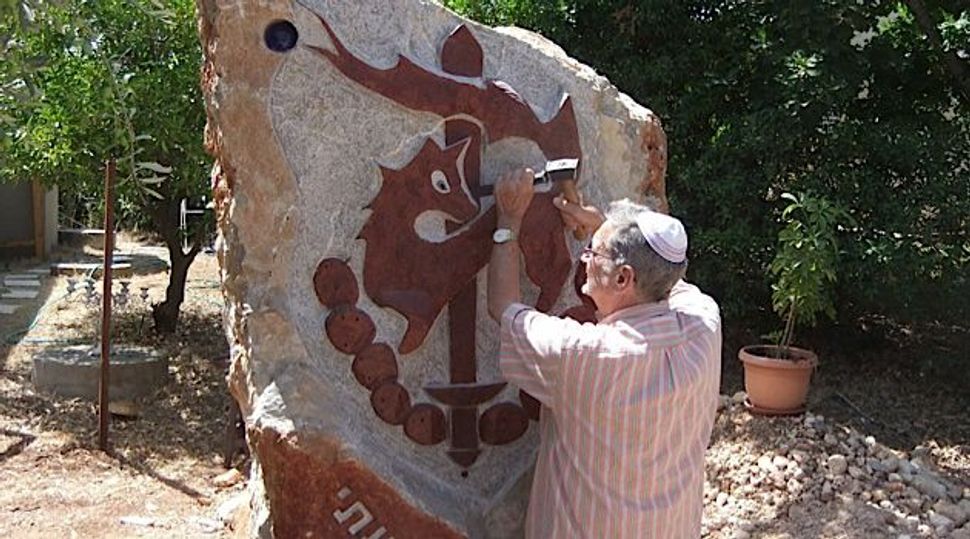 Chiseling For Zionism: Morton Freiman is working on a sculpture for the Givati Brigade. It shows a fox, sword and desert cactus, the unit’s insignia. Image by Tina Freiman

Shortly after his aliyah to Israel six years ago, then 73-year-old Morton Freiman met with Ofek Buchris, commander of the Israel Defense Forces’ Golani Brigade, and informed him that he wanted to join the Israeli army.

When Buchris asked Freiman, a retired plastic surgeon from Miami, what he could do for the IDF, Freiman said he could make a sculpture of a menorah for the army base. The commander took him up on his offer.

Since then, Freiman has become the unofficial sculptor in residence for the IDF, a title coined by friends. He has created a memorial sculpture and menorah for the Givati Museum, a memorial site in Metsudat Yoav and another for the Golani training base in Regavim. Currently he is working on one at the request of the Chel Handasa, the engineering corps.

His artistic prowess has earned him some notoriety: Not only have Israeli newspaper headlines praised his creations for the IDF, but he also has his unique Israeli army patch marking his rank as pasal tzva’i, army sculptor. A short film about the memorial Freiman created for the Golani unit, released by the IDF Spokesperson’s Unit, includes the speech Buchris gave at the dedication ceremony. He notes how Freiman overcame the tough stone material by persistently using his chisel and hammer. “There’s no place like the Golani Brigade to show how much the spirit can overcome any material.”

A second sculpture for the Givati Brigade, on which Freiman inscribed the unit’s insignia of a sword, fox and desert cactus, was unveiled at a ceremony in September for the fallen soldiers of the Gaza War.

Freiman and his sculptures have also made an indelible impression in Mitzpe Netofa, the village in the Galil where he resides, said David Nissim, a neighbor who helps Freiman pick out stones at the quarry. The 20- and 30-ton rocks Freiman works on at the side yard of his home are shown to every visitor.

“He doesn’t make it a private work, it’s a work of the community,” Nissim said about Freiman’s unusual hobby. “A lot of people in our neighborhood feel connected to his work.”

Others come to volunteer. Freiman teaches them how to use the chisel. When asked why he doesn’t use electric tools instead of a hammer and chisel, Freiman asserts that he wants to use the energy of his body and soul for this menorah.

In a way, Freiman has been preparing for this role his entire life. During his 40-plus year career as a plastic surgeon in Florida, he used his creativity and careful hands to chisel faces. On the face of it, working outside the operating room, with no blood or human tissue to worry about, seems like an easier job. On the other hand, dolomite rock is a considerably more difficult medium to work with than bones: Hammering and chiseling away the pieces of stone can be arduous, he admits.

Freiman comes to such work naturally. Growing up in Brooklyn, he was rarely without a sketch pad, and he filled his family’s home with artistic creations. In more recent years, he displayed his illustrated ketubot, Jewish marriage contracts, at the Jewish Museum of Florida in Miami.

Freiman’s daughter, Chana Stiefel, who lives in Teaneck, New Jersey, said her father has always been intensely creative, carving, painting, sculpting and writing Hebrew calligraphy. Sometimes he would get so excited about a creation that he’d work on it all night and then go to work.

There were also some quirky projects over the years. “Once he wanted to know what would happen if we threw paint onto a canvas from the roof of our house. It was pretty cool, but we ended up splashing acrylic paint along the side of our house,” Stiefel recalled.

Whether he’s painting, sculpting or drawing, the feeling is the same. “My motivation for creation is purely instinct. When I design, there’s a feeling of exhilaration.” he said in a telephone interview from Israel.

In Freiman’s mind, his contributions to the army and landscape of Israel don’t warrant any special acclaim — he sees them as his duty. If everyone in Israel is obligated to serve in the army, a man in his 70s should be no different, according to Freiman, whose aliyah was motivated by Zionist sentiment. He and Tina Freiman, a teacher and his wife of 50 years, first visited Israel in the 1960s and returned several times, including during the 1973 Yom Kippur War, when Freiman volunteered as a physician at Hadassah Medical Center. When they retired, Tina turned to her husband and quipped, “Morty, I’m making aliyah. Would you like to come with me?”

He still gets sentimental about the fruits of his labor. “It’s an extremely emotional thing to see hundreds of soldiers standing at attention and getting excited about lighting a Hanukkah menorah, which is a symbol of victory,” he said. “For an old, retired guy to be at an army base, bringing one of my creations, a hanukkiah, and seeing a soldier light a candle for all of us, this is quite a dream come true.”

Deena Yellin is a newspaper reporter in New Jersey whose work has appeared in a variety of publications, including The New York Times, Newsday and The Jerusalem Post.