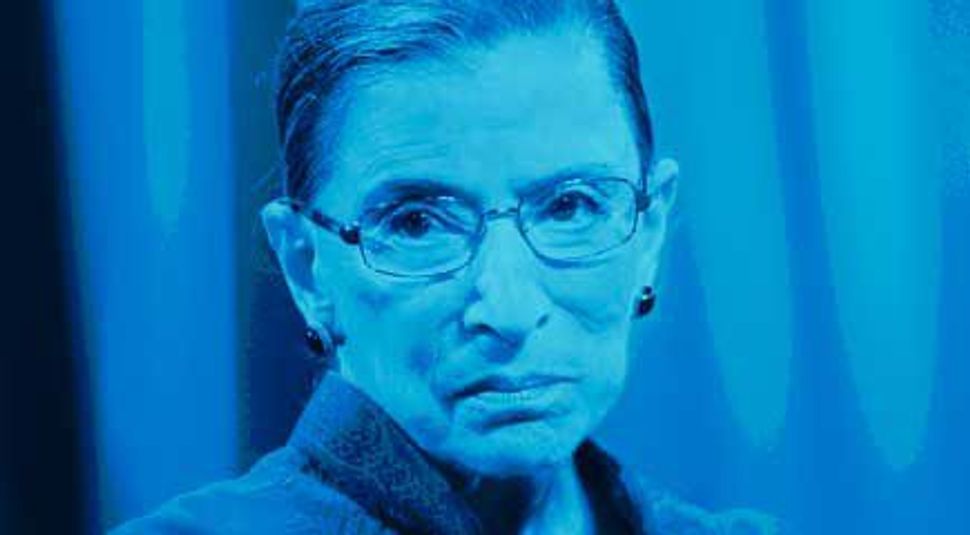 Justice Ruth Bader Ginsburg, frail in appearance and feisty in everything else, waved off calls for her retirement this year and proved her power on the U.S. Supreme Court, even when penning notable dissents. She issued a scathing rebuttal to the court’s majority, upholding a restrictive Texas voting law, and she made headlines with her sharp dissent in Burwell v. Hobby Lobby — in which she wrote that the “court, I fear, has ventured into a minefield.”

The dean of the three female justices, and the first Jewish woman appointed to the high court, Ginsburg seems to relish her veteran status. Known for speaking slowly and softly, she has nevertheless raised her voice forcefully this year in the face of the conservative tilt of the Roberts court.

The Hobby Lobby decision is a case in point. Hobby Lobby, a large arts and crafts retailer, and another company opposed the contraception mandate in the Affordable Care Act, claiming it went against their Christian beliefs. The provision required most employers to cover contraception to their female employees at no cost. Ginsburg’s opinion speculated that “approving some religious claims while deeming others unworthy of accommodation” might put at risk the Constitution’s establishment clause.

In a recent interview with The New Republic, Ginsburg emphasized: “None of us questioned the genuineness of the Hobby Lobby owners’ belief. That was a given. But no one who is in business for profit can foist his or her beliefs on a workforce that includes many people who do not share those beliefs.”

She also said she would overrule Citizens United if she could: “I think the notion that we have all the democracy that money can buy strays so far from what our democracy is supposed to be.”

Born Ruth Joan Bader in Brooklyn, New York, the future Supreme Court justice lost an older sister at an early age, and her mother the day before her high school graduation, after a long battle with cancer. After graduating from Cornell University, she married Martin Ginsburg, a future tax attorney, and enrolled in Harvard Law School. She later transferred to New York to follow her husband’s job and graduated from Columbia Law School.

Though she tied for first in her law school class, she found it difficult to find work, and eventually became a champion of women’s and civil rights, a cause that defined much of her legal career.

Having beaten colon cancer in 1999 and pancreatic cancer in 2009, Ginsburg has no plans to retire. “As long as I can do the job full steam, I will stay here,” she said. At 81, the surprisingly spritely Ginsburg still works out with a trainer twice a week.

Today’s meme-loving generation has embraced her feisty approach, and Ginsburg now has Tumblr sites devoted to her, and even T-shirts with “Notorious R.B.G.” superimposed on her photo. It says something about her chutzpah that she hands out those T-shirts as gifts.