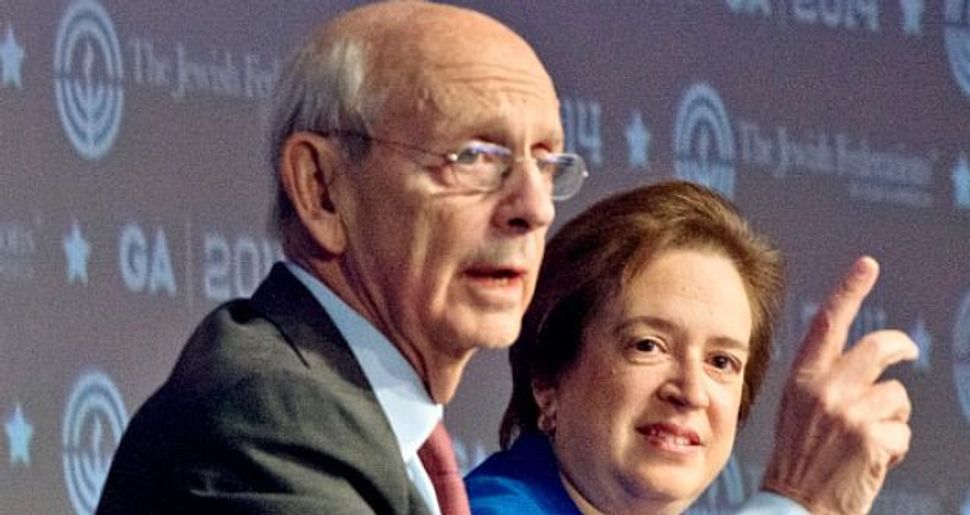 Supreme Court justices Stephen Breyer and Elana Kagan talked about their Jewish identities at the opening plenary of the 2014 General Assembly conference of the Jewish Federations of North America.

Speaking before a crowd of more than 2,000 at the conference center just outside Washington, Breyer said the most remarkable thing about there being three Jews among the nine Supreme Court justices is how unremarkable it is in America today.

Kagan, the other justice on the panel discussion moderated by NPR correspondent Nina Totenberg, said that her Jewish identity was the one thing that didn’t come up during her confirmation process.

“The one thing nobody ever said, the one thing I never heard was, ‘We don’t need a third Jewish justice,’ or ‘There’s a problem with that,’ ” she said. “So that’s a wonderful thing. My grandmother would have said ‘Only in America.’ ”

Kagan also talked about her bat mitzvah, crediting Rabbi Shlomo Riskin – then of the Lincoln Square Synagogue on Manhattan’s Upper West Side (and now rabbi in Efrat, West Bank), with enabling the ceremony even though that sort of thing was not done in Orthodox synagogues back when Kagan was a kid.

The bat mitzvah wasn’t exactly identical to her brother’s, Kagan said – it was called a bat Torah, took place on Friday night rather than Saturday and had her chanting the haftarah portion rather than the Torah portion – but it was meaningful and groundbreaking nonetheless.

“We reached a kind of deal: It wasn’t a full bar mitzvah, but it was something,” she said. “Rabbi Riskin was very gracious, and I think it was good for the synagogue.”

“And that is a battle, and we’re on the right side of that,” he said.

The theme of this year’s General Assembly is “The world is our backyard,” and speakers will include Vice President Joe Biden and, via satellite, Israeli Prime Minister Benjamin Netanyahu.

“This year’s G.A. will remind us of why federation is relevant and critical,” G.A. co-chair Howard Friedman said.