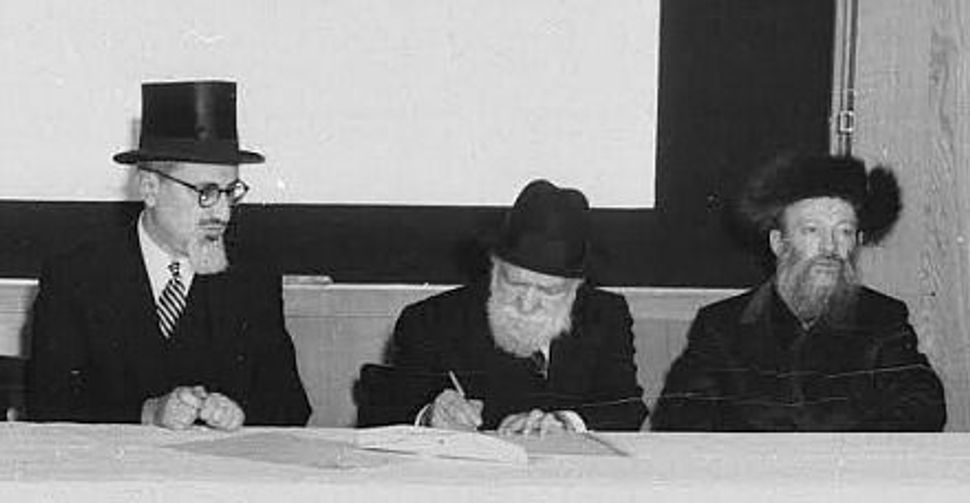 Image by courtesy of Yitz Twersky 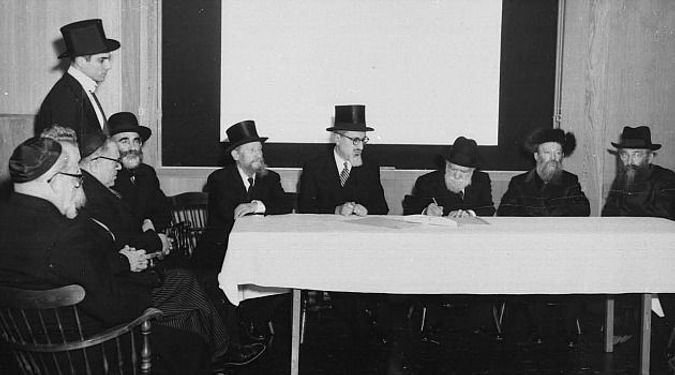 Rav and Rebbe: Rav Joseph Soloveichik, center in top hat, meets with leaders of the Talner Hasidic sect at the marriage of Moshe Twersky’s parents in Boston. Isidore Twersky, Moshe’s father, stands at the left. Image by courtesy of Yitz Twersky

Rabbi Moshe Twersky, murdered in a bloody Jerusalem terror attack on November 18, bore the last name of one of the most illustrious families in Hasidic Europe. But he also was the “truest disciple” of his grandfather, Rabbi Joseph Ber Soloveitchik, the founder of Modern Orthodoxy in America, Twersky’s brother-in-law told the Forward.

Twersky, the scion of two famed Ashkenazic rabbinic dynasties, was slain in a West Jerusalem synagogue during morning prayers.

Friends mourned Twersky’s loss, and the loss of the connection Twersky represented to Soloveitchik, known in Modern Orthodox circles as the Rav. “Moshe was the apple of the Rav’s eye,” said Rabbi Menachem Genack, CEO of the Orthodox Union’s Kosher Division and a lifelong friend of Twersky’s. “I would have to say the most special relationship the Rav had, in terms of this sense of continuity… was with Moshe as he was growing up.” 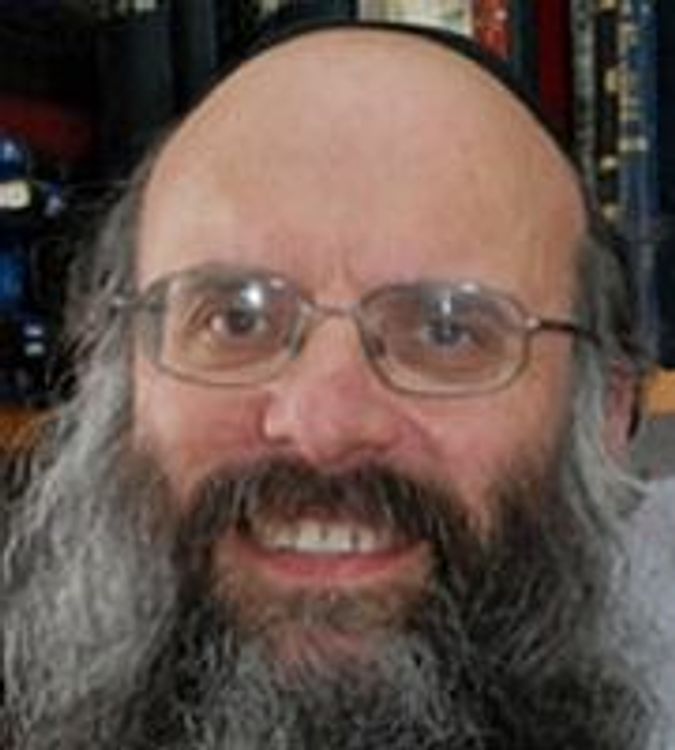 Twersky, 59, was buried in Jerusalem soon after his death. His killers used guns, knives, and an ax in their assault. Mahmoud Abbas, president of the Palestinian Authority, condemned “the killing of worshippers” in West Jerusalem while at the same time demanding “an end to invasions of Al-Aqsa Mosque,” a reference to recent efforts by right-wing Israeli Jews to challenge Muslim control over the Temple Mount area holy to Jews and Muslims.

Twersky, said his brother-in-law, Rabbi Jonathan Rosenblatt, of the Riverdale Jewish Center in the Bronx, was “the gentlest, most affable, most loving and tolerant person you would ever meet. It’s just such a terrible contrast between such sublime gentleness and such horrible brutality.”

Twersky had a gold-plated Orthodox pedigree, the product of an unusual union between the Hasidic Twersky dynasty and the Lithuanian Soloveitchik dynasty. His parents’ marriage, which united the two lines, was analogous, perhaps, to a theoretical union of a Bush and a Clinton.

“It was a bridge between the Hasidic world and the non-Hasidic world,” said Yitz Twersky, a distant cousin and a family historian. “It was a big deal.” 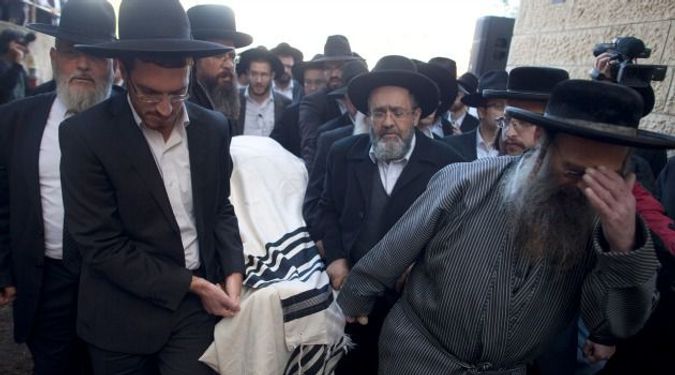 Ultra-Orthodox mourners carry the body of Moshe Twersky after he was slain in the Jerusalem synagogue terror attack. Image by getty images

A photo of the wedding between Moshe’s parents, Rabbi Isadore Twersky and Dr. Atarah Twersky, shows Rabbi Joseph Soloveitchik in a modern-style top hat and Isadore’s father, Meshulam Zulia Twersky, in a Hasidic-style fur hat. The distinction might seem marginal to secular eyes, but to the Orthodox it signified vast differences in ideology and tradition.

Despite Twersky’s lineage, Genack said that he kept his head about him. “He was very, very humble,” Genack said. “Here he is, the scion of this extraordinary family, the most extraordinary family, and he was just very humble.” Isadore Twersky, Moshe’s father, was a Harvard professor who simultaneously served as the grand rabbi of Talner Hasidic group in Boston. His ancestor, Menachem Nuchem Twersky, was a disciple of the Baal Shem Tov, the 18th-century founder of Hasidic Judaism.

According to Yitz Twersky, Menachem Nuchem’s grandsons spread across Ukraine to found their own Hasidic courts, so today the leaders of the Skver, Rachmastrivka, and Talner Hasidic groups, among others, all share the surname Twersky.

Isadore, who succeeded his father as the head of the Talner Hasidic court in Boston, lived a different life than many of his fellow grand rabbis. He graduated Harvard College in 1952, received a PhD in 1956, and became a full professor at Harvard. An expert on Maimonides, he held the Nathan Littauer Professor of Hebrew Literature and Philosophy chair and served as chairman of Harvard’s Near Eastern languages and literatures department.

But away from Cambridge, he was always the Talner rebbe.

“In the classrooms and lecture halls of Harvard, Dr. Twersky was a professor personified,” his New York Times obituary read when Isadore Twersky died in 1997. “In his long black kapote at the Congregation Beth David… he was every inch the dynastic Talner rebbe.”

Moshe Twersky’s mother, Atarah Twersky, also spanned worlds. Her father was Joseph Soloveitchik, the philosophical father of Modern Orthodox Judaism in America and the spiritual lodestone of Yeshiva University. Soloveitchik himself was born to a prominent Orthodox rabbinic dynasty, though one that grew out of a vastly different tradition than the Twersky family.

The Soloveitchik rabbis have their roots in the town of Brest-Litovsk in Belarus, the core of the Lithuanian Yeshivish tradition. In contrast to Hasidic rebbes, the Soloveitchiks and their disciples traditionally espouse an intellectual approach to religiosity and Torah study, and reject the ecstatic and the emotional.

Rabbi Joseph Soloveitchik’s brothers, uncles and cousins were also prominent Lithuanian rabbis. Unlike some of his relatives, Soloveitchik placed secular studies on par with religious studies, an idea that formed the basis for both Modern Orthodoxy and Yeshiva University.

Moshe Twersky followed the paths of his father and grandfather. According to Genack, he studied personally under his grandfather Soloveitchik as a teenager, then attended Harvard, then went to Yeshiva University to continue studying with Soloveitchik.

“Moshe was the oldest” of Soloveitchik’s grandsons, Genack said. “And Moshe was also especially gifted.”

Twersky had lived in Israel for 30 years, according to Jonathan Rosenblatt. He served as a dean at Yeshiva Torat Moshe in Jerusalem. The school’s rosh yeshiva, Rabbi Moshe Meiselman, is a cousin on the Soloveitchik side. Twersky left behind a wife, Miriam, five children and dozens of grandchildren.

“He was very careful in his own religious behavior, but kept it so quiet and personal and made everybody around him feel comfortable,” Rosenblatt said.

Twersky’s siblings and mother traveled to Jerusalem on November 18 to observe shiva. Genack said that he had talked about Twersky with his mother just a day before the killing and had planned to call him.

“Now we’re never going to have the chance,” he said.