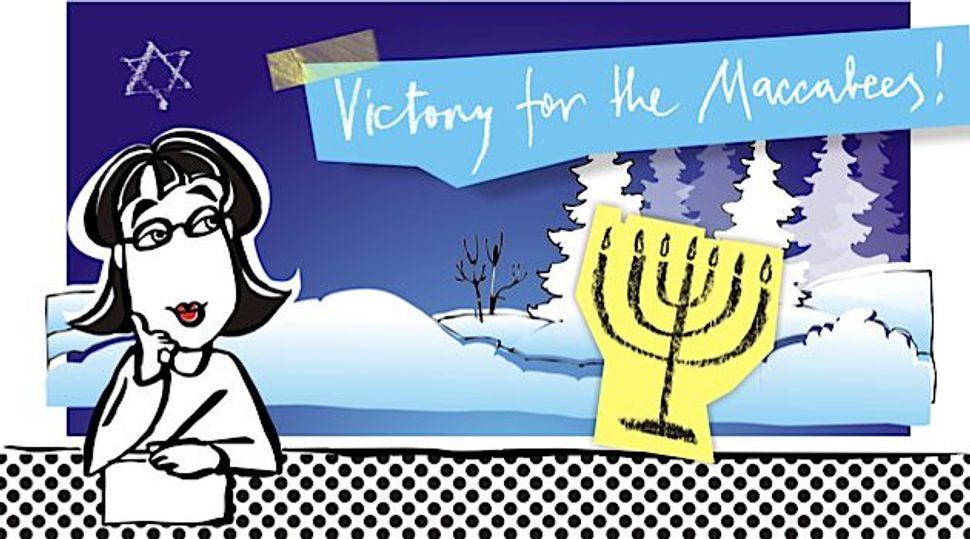 Sometimes it can feel like a White Christmas with every Hanukkah card you write.

While clearly ’tis the season for Christmas cards and letters, Jews feel a swirling snow globe of emotions when it comes to sending holiday cards, even ones that blandly wish the recipients “Happy Holidays.” Most generic cards don’t scream “Victory for the Maccabees!” So the question is: Does sending a not-specifically-Hanukkah card mean the sender is buying into Christmas?

“I try to buy some blue and silver ones and make sure they look purely wintery,” says Megan Levy, a disaster resilience planner in Seattle. (Yes, that’s a real job.)

The ideal seems to be an image that is religiously pareve: neither Santa nor latke. Levy, for example, looks for cards featuring nature scenes “where there’s a pretty red bird.” Or winter scenes. Or snowmen.

But snowmen, believe it or not, turn out to be a minefield all their own. “No trees, wreaths or snowmen for me!” insisted one friend. By trees, she meant Christmas trees. Ditto, Christmas wreaths. But snowmen? Big, smiling balls of snow? Those are taboo?

Clearly, different Jews just consider different things Christmasy. Some draw the line at reindeer. To fashion blogger Nancy Brenner, who runs the Tumblr site garmentdistrictdiva, anything red and green is treyf. (Not to mention, unattractive.) I heard from one man who considers the tag line “Peace, love and joy” too religious — and the religion he’s considering is not King David’s.

Rachel Teichman, a Houston-based blogger who runs the Jewish crafts and food site OOGIAH.com, is adamant about avoiding certain graven images. “I never pick a card that has a pine tree, or even stars or snowflakes. I feel certain symbols have been taken over by Christmas and I just won’t use them.” What’s more, certain phrases don’t cut it for her, either. “I feel like ‘Happy Holidays’ is just code for ‘Merry Christmas.’ It’s not ‘Seasons Greetings’ which is TOTALLY the same [as Merry Christmas]. Happy Holidays is maybe one step away. But it doesn’t mean ‘Happy Hanukkah.’”

So, how about using the most uncontroversial image you could think of — your own children. “I get 100 different pictures from 100 different families, and of course I want to show off my own kids and tell about my children, so we do mimic some of the things going on in this country around us, because we want to be included,” says Neal Hoffman, who knows a thing about mingling cultures. He’s the inventor of Mensch on a Bench — the Jewish version of the Elf on the Shelf, a doll that parents pose each night in different spots around the house before Christmas, proving to extremely young or gullible kids that said Elf is “real.” As such, the target audience also believes he reports their behavior to Santa, with naughty-or-nice consequences pending.

With or without the Mensch doll in the photo, Hoffman delights in sending a card featuring his family, and frankly, so does my household. Our seasonal greeting bugaboo? We show the whole family, my husband and me included. When people send pictures of just their kids, it’s like they’re hiding behind their younger, more attractive progeny.

Our cards feature a background of confetti or something equally secular, and a greeting that attempts to be non-offensive, like our default: “Happy New Year.” Last year we were so late taking our picture (like, it was already THIS year) that we scowled for the camera and our printed message was, “Oh, like you’re never late with YOUR cards?” So we don’t think photo cards are inherently un-Jewish.

Ah, but the letters some families send — that’s another story.

“A full-page type of letter is a Christmas letter,” says Teichman, the OOGIAH.com blogger. Another friend of mine whose name I can’t mention because of what she says next agrees. “I can’t stand the letters, maybe just because they’re all full of big brags. How one child was studying very hard to pass his Spanish final, or how wonderful the kids are doing. There’s not enough filtering.”

What makes bragging in a letter seem so non-Jewish? “Jews tend to do this over the phone,” she says.

Michael Ray Smith, a professor at Palm Beach Atlantic University (and not a Jew), believes that highlight-reel letters aren’t inherently Christian. They’re inherently American. “A year-end letter is part of the middle class culture,” he says. The reason season’s letters get a rap on par with the season’s fruitcake is that they’re both so easy to make fun of — and hard to digest.

Bottom line: If you’re simply sending a card to stay in touch with far-flung friends or business associates, that’s neither un-Jewish nor uber-Christian — but just nice. So if that’s your plan, get started already.