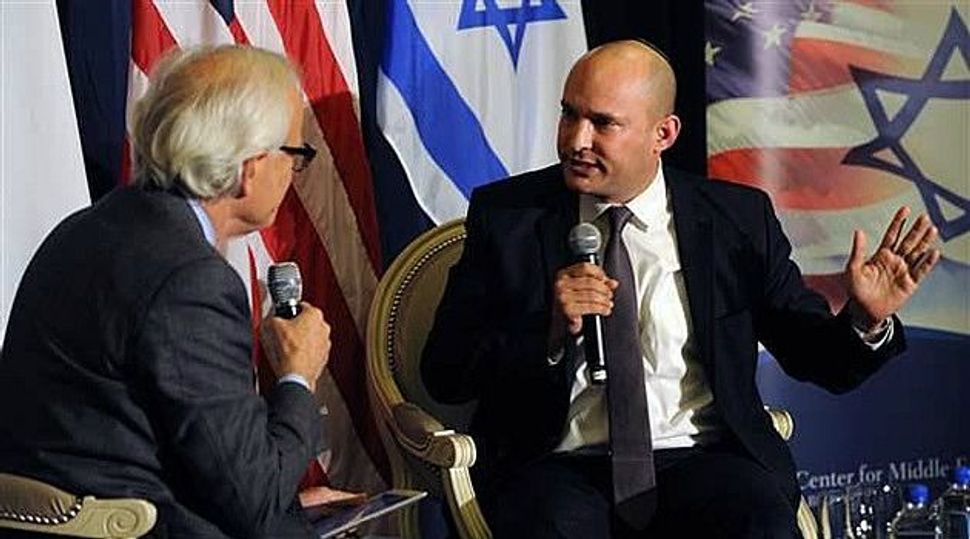 It takes plenty of chutzpah to tell an audience made up of American and Israeli political insiders and diplomats who have devoted their careers to promoting a two-state solution that they know nothing about how the Middle East works.

But that is pretty much what Israel’s rising right-wing star Naftali Bennett did on Saturday night.

Speaking to participants at the annual Saban Forum, which brings together top Israeli and American policymakers and public opinion leaders, Israel’s minister of economy and leader of Habayit Hayehudi, Bennett pulled no punches, taking aim at what he dubbed as the “peace industry” for making Israel look bad.

“We have to undo the years of nonsense that the peace industry has fermented, which led us to the position where the world thinks we are occupiers in our own land,” Bennett said.

Sitting next to Bennett on the stage at the Willard Hotel conference room was Martin Indyk, until recently the Obama administration’s special peace envoy, who was tasked with interviewing Bennett. But as the Israeli minister laid out his worldview, including dismissal of the two-state solution, Indyk, who initially sought only to point out what he saw as “inconsistencies” in Bennett’s plan, grew visibly impatient.

“I just think you live in another reality,” he told the Israeli speaker.

“I live in another reality?” Bennet shot back, “I’ve been in the first intifada, the second intifada, I’ve been on ground there. I know more than Oslo and more than all those conferences …. You live in a different reality.”

Then, escalating the already contentious discussion Bennett turned to Indyk and asked: “How many people need to die before you wake up?”

“Israel has a problem, and I as a Jew who cares about Israel care about that,” Indyk tried again, leading Bennett to respond: “And of course you know better than the Israeli public.” At this point, one could not miss the gasps of some in the audience.

“People at conferences,” Bennett went on, addressing the conference, “are not smarter than people in Ashkelon who get thousands of missiles on them.”

At the crux of the debate, beyond the Israeli minister’s obvious disdain for those involved in the peace process, was Bennett’s plan to move away from a two-state solution, which he views as unachievable, and to annex up to 60% of the West Bank to Israel, while investing in infrastructure in the remaining Palestinian territories. “It is doable,” he argued. “The reality is that the solution we have dealt with in the past 30 years is not working.”

On a deeper level, Bennett believes his plan, which he admits is not a solution but rather a practical measure, could change the Middle East narrative, moving Israel away from being viewed as the occupier of Palestinian lands.

“There’s a process of changing the global view of what’s going on here,” he said, later explaining that “not always is the world right.”

Indyk, a veteran diplomat who has spent most his life working on the peace process from within the administration and outside, gently tried to inquire how Bennett’s plan, which effectively does away with the two-state solution, could possibly lead to any result other than complete isolation of Israel and loss of the support from its closest allies and partners.

“I would come to our friends, to the president and say: listen, we don’t agree,” Bennett replied. “You think we need to give up our land to the ‘67 lines, plus minus, swap it, I don’t. My people don’t. We think that would be tantamount to national suicide.”

Walking out of the conference room, after almost 90 minutes of this testy debate, American participants at the Saban Forum seemed at a loss at the positions presented by Bennett, who according to public opinion polls could likely emerge as leader of the second largest party after Israel’s March 17 elections.

Israeli observers, however, had a different take.

“He did exactly what he had come to do,” said one Israeli columnist in a hallway discussion following the speech, “he showed his supporters in Israel that he isn’t afraid of the Americans.”