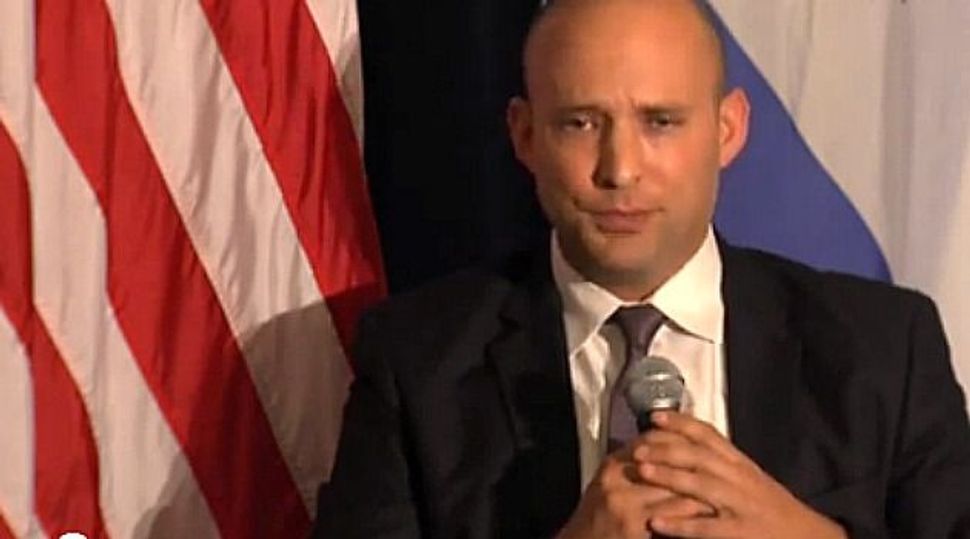 In one telling moment, the Jewish state’s rising right-wing star and the Democratic Party’s most prominent pro-Israel donor demonstrated just how deep the coming gap may be between Israel and its closest ally.

Haim Saban, a key backer of Hillary Clinton who grew up in Israel and launched his career there, wanted to know how, in the face of worldwide opposition, Naftali Bennett planned to implement his vision of annexing most of the West Bank to Israel while denying the Palestinians a state of their own.

“We have to change direction,” Israel’s current economy minister told the Brookings Institution’s Saban Forum in response to this question from the forum’s sponsor. “It’s already working in Israel. Now we have only a little thing called the rest of the world. But you have to start somewhere. So I’m starting here.”

But even in Washington, capital of the Jewish state’s staunchest ally in the world, the response of the gathered elite portended a newer, even tougher stage in the two countries’ relationship should Israel’s right-wing bloc win the country’s upcoming election.

In the event of such a victory Bennett is expected to emerge, at the least, as Israel’s defense or foreign minister — a prospect that set off alarm bells in Washington at the December 7 forum.

“Bennett is playing with diplomatic fire,” said David Makovsky, a scholar at the Washington Institute for Near East Policy and until recently a member of the U.S. peace team that tried but failed to broker an Israeli-Palestinian deal. “With talk of European delegitimization and potential economics sanctions with Israel’s largest trading partner, he would do more than light the match. He could burn down the house.”

For America, as for most of the rest of the world, abandoning the idea of establishing an independent Palestinian state alongside Israel is considered a heresy. But Bennett’s rapidly accelerating popularity may make it a heresy whose entrenchment within Israel’s mainstream America will no longer be able to ignore.

In what he describes as a practical approach to the conflict, Bennett proposes annexing some 60% of the West Bank to Israel and setting up a well-funded autonomy for Palestinians in the rest of the territory. Within these boundaries, the Palestinians, he says, would have greater local freedom. But Bennett rejects granting them sovereign rights over their land and its resources, much less over their foreign relations or their security and defense.

In the past, Washington has proven itself adept at sidestepping Israeli politicians that it deemed too extreme, even when they occasionally made their way from the fringes into crucial cabinet seats. Such has been the case with Avigdor Lieberman, Prime Minister Benjamin Netanyahu’s foreign minister, a Soviet-born-and-bred politician who has called, among other things, for bombing Egypt’s Aswan dam. Lieberman has also advocated stripping Israeli citizenship from hundreds of thousands of Israeli Arabs as part of a peace deal in which they would become part of a Palestinian state. The Obama administration has, for the most part, simply snubbed Lieberman and conducted its business with Netanyahu directly and with other ministers of its choosing.

But Bennett, with a base of public support that is likely to be greatly augmented by the coming election, poses a bigger dilemma for Washington. His ascent is seen as reflecting something fundamentally more serious than one man’s successful jockeying to the top tier in Israel’s fractious political culture. Until now, Washington has clung tenaciously to Netanyahu’s affirmation, however wan, of support for a two-state solution to resolve Israel’s occupation of the West Bank, its blockade of Gaza and its conflict with the Palestinians. But Bennett puts his stand against this idea at the center of his political persona. That could force America to confront a new reality.

In November, Bennett highlighted his determination to put his views before an international audience by reaching out over Netanyahu’s head directly to the American public. In a New York Times op-ed, he called on readers to “re-think the two state solution” and presented the essentials of his plan for dealing with the conflict: upgrading Palestinian autonomy in 40% of the West Bank territory, in the sectors known as Areas A and B; drastically increasing investments in these areas; and annexing to Israel the remaining 60% of the land, known as Area C.

At the Saban Forum, an annual meeting where top-level Israelis and Americans discuss bilateral relations between the two countries, Bennett repeated his plan, and for good measure mocked those who continue to push for a two-state solution as members of a failed “peace industry”.

“I just think you live in another reality,” a visibly shocked Martin Indyk told his Israeli guest, departing from his assigned neutral role as Bennett’s interviewer on stage. Indyk, the Obama administration’s former top peace envoy, argued that abandoning the two-state solution in favor of partial annexation would lead to Israel’s international isolation.

Unfazed, Bennett voiced confidence that Israel’s technology innovations, embedded in scores of products, would make it impossible to boycott the country economically. He suggested calling up the U.S. president and telling him: “You think we need to give up our land to the ‘67 lines, plus minus, swap it, I don’t. My people don’t. We think that would be tantamount to national suicide.” He touted “internal spine” as the quality needed above all others in an Israeli prime minister.

Many in the audience of American policymakers and analysts had paid little attention until then to the up and coming politician. But in his dark tailored suit, dark tie, and spotless white shirt, Bennett articulated his unpopular ideas crisply, with a perfect command of English — the result of his upbringing in an American family and of living for extended periods in the United States.

Today, Bennett lives in Ranana, an affluent town within Israel’s pre-1967 borders, after a successful and lucrative career as a high-tech entrepreneur — a previous stage of his life that he was careful to mention several times to his audience. Notwithstanding the knitted yarmulke on his head, Bennett, who is Orthodox, highlighted the practical considerations behind abandoning the two-state solution rather than the biblical-historical aspects that have for years led the Israeli right-wing’s argument.

“One of the reasons his message is resonating is [that] he is not offering a utopian solution; He admits he doesn’t have a perfect solution and instead offers something practical,” said Natan Sachs of the Center for Near East Policy at the Brookings Institution. This practical approach, Sachs added, “represents Israel’s growing consensus view that the conflict is unsolvable.”

It is a grassroots view that is spreading despite increasingly urgent public counter-expressions from veterans of Israel’s security establishment. In November, 106 retired Israeli generals, intelligence directors and national police commissioners signed a public letter urging Netanyahu to open regional negotiations based on the Arab League’s peace initiative of 2002. The initiative, which was sponsored by Saudi Arabia and accepted unanimously by the other Arab member states, calls for an agreement between Israel and the Palestinians based on Israel’s 1967 armistice lines with mutually agreed border adjustments. The agreement would include peace and normal diplomatic relations between Israel and the wider Arab world. The security veterans’ letter portrays the Israel-Palestinian conflict as not only more resolvable now than ever, but describes action toward this end as crucial for Israel’s security interests.

Nevertheless, in his Facebook page — his key vehicle for communicating with his followers — Bennett stokes popular sentiments of disdain towards such views. Turning to leaders of the center and left wing parties he asks: “What is your plan?” It is the same language historically owned by the left when attacking those who opposed a two-state solution. Bennett, in this new equation, represents the pragmatic approach, while those still believing in the land-for-peace formula are dubbed unrealistic.

Palestinians, looking at the entire package, largely reject Bennett’s ideas. Ziad Asali, president and founder of the American Task Force on Palestine, a pro-Palestinian advocacy organization in Washington, stressed that there is “not one voice” among the Palestinians who would trade a hope for future statehood for immediate improvement in quality of life.

According to public opinion polls conducted by Israeli TV networks, Bennett’s party is expected to gain ground and emerge as second only to Netanyahu’s Likud party in the upcoming elections, scheduled for March 17. This would allow Bennett to demand a top cabinet position.

But on November 10, a new development emerged that could leave Bennett outside government altogether. The opposition Labor Party and the party Hatnuah, led by Netanyahu’s disaffected justice minister, Tzipi Livni, reached a deal to merge for the election. Polls indicate this combined faction could come out on top. This would allow it to form a coalition with several centrist and ultra-Orthodox parties, and perhaps even with Lieberman’s Israel Beiteinu party to attain a majority in Israel’s parliament. In that case, Bennett would be consigned to the opposition, but could challenge an embattled Netanyahu as leader of the right-wing nationalist camp.

Experts following American Middle East policy see no chance that his position will shake America’s support for a two-state solution despite his domestic popularity.

“What Bennett did is to reinforce an already existing suspicion that there is no firm Israeli commitment to a two-state solution,” said Robert Danin, a former State Department official now with the Council on Foreign Relations. “I don’t think it marks a new phenomenon, but it is a step back to a previous era.” Danin noted that before the 1993 Oslo Peace Accords between Israel and the Palestinians, Likud’s policy supported Palestinian autonomy and rejected an independent state.

Elliott Abrams, a former top National Security Council adviser under George W. Bush, said that Bennett’s opposition to the U.S. peace stand would not affect U.S.-Israel relations simply because a long-term peace agreement with the Palestinians is not on the table right now.

“What’s new is that Israelis recognize by large majorities that there will be no agreement with the Palestinians any time soon,” he said. “American Jews and the U.S. government need to understand this as well.”