Will Chabad Rethink Open Door Policy After ‘I Will Kill Jews’ Attack? 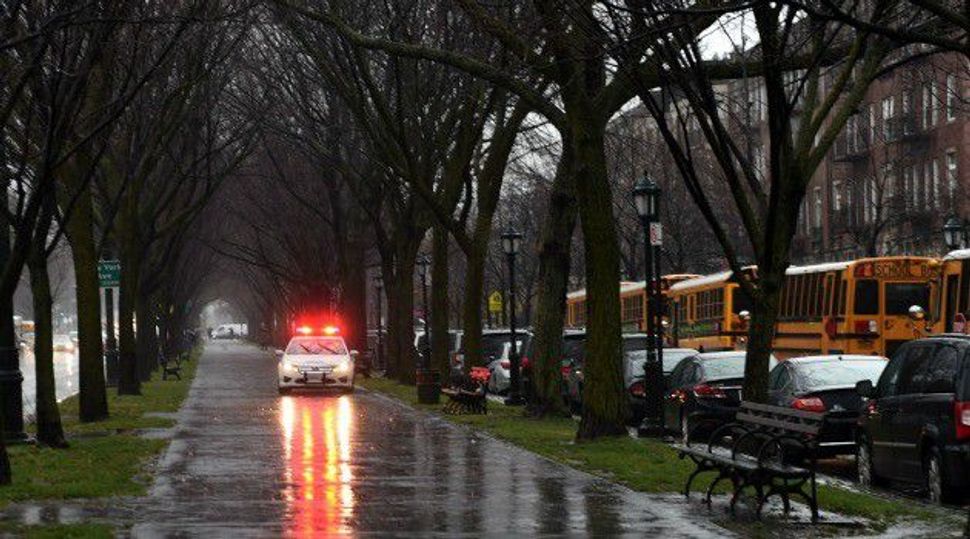 (Haaretz) — The large synagogue at the heart of the international Lubavitch movement, called 770 after its address on Eastern Parkway, is busy around the clock, with people coming and going to pray and study religious texts. No one was prepared for what happened late Monday night, when a visibly agitated man walked in, reportedly yelled “Kill the Jews!” and immediately stabbed a young student in the head.

Levi Rosenblat, 22, had arrived in Crown Heights from the West Bank settlement of Betar Ilit just about two weeks earlier, local blogs reported. After his assailant plunged a 9-inch knife into Rosenblat’s left temple at 1:40AM, according to a statement from the New York City Police Department, someone ran outside to alert one of the police officers always stationed at the corner.

When police entered the synagogue the perpetrator, who the NYPD said was named Calvin Peters, put the knife down on one of the many tables that are littered with books used in prayer and study. Video shows him picking it up again and lunging at a police officer, who shot him once in the torso. Peters, 49, later died of his injury.

While Lubavitchers in Crown Heights are generally on edge, locals say, because of anti-Semitic attacks around the world and in the neighborhood in the last year or so, no one expected anything like this to happen in their spiritual sanctuary.

“770 is like a second home for someone who lives in Crown Heights, and even if you don’t go very often it’s a big part of your life and the center of the community,” said Elad Nehorai, a Lubavitcher who lives in the neighborhood and often prays there. “It’s like seeing an attack like this in your home.”

The enormous synagogue holds several thousand people, with the women upstairs on a balcony behind tinted, one-way glass that shields them from the view of the men gathered below. The offices, in which Chabad employees work to coordinate the movement’s large network of emissaries around the world, are upstairs from the synagogue. A smaller brick building next door, also known as 770, houses the rebbe’s personal office, which remains as he left it in 1994, when he died. Weddings routinely take place right outside that doors of the building, in good weather and bad, so that brides and grooms can be as close to the rebbe as possible.

The synagogue at 770 was always “the rebbe’s shul,” where the late Lubavitcher rebbe, Menachem Mendel Schneerson,prayed, gave the talks that provided guidance to his many followers, and held court. Since Schneerson died it has become the center of divisions between Chabadniks who continue to believe that he is the messiah, and who hung banners proclaiming him so, and those who disagree.

But even for those who dislike the messianists’ ritual chanting of a song proclaiming him king messiah, to pray at 770 is to feel close to the rebbe. “At the end of the day people still see it as a symbol,” said Nehorai, of the internal tensions. “For them 770 is larger than those things.”

Rabbi Chaim Miller, who has lived in Crown Heights for the past decade, says that security at 770 should be improved, but worries that it will erode the welcoming culture that has long been a hallmark of the synagogue at the headquarters.

“They have to upgrade the security because it’s such a large, teeming place, and there really should be some 24/7,” said Miller, an author and teacher, whose biography “Turning Judaism Outwards: A Biography of the Rebbe, Menachem Mendel Schneerson,” was published earlier this year.

“770 has always been welcoming, a home to the weird and the wonderful,” he said in an interview, in contrast to the synagogues he grew up attending in England, “where shuls are very formal, and as a kid I felt very uncomfortable because everyone’s looking at you and it’s so stifling.”

“One of the reasons I appreciate 770, besides it being the rebbe’s shul, that it’s so welcoming, non-judgmental, it’s got that very relaxed quality to it,” said Miller, who often prays there. “This is really a violation of that openness.”

“I know people who have been homeless, they come to 770 and discover Chabad and found someone who would rehabilitate them, give them a home. That’s been because of this open door policy. But obviously it’s taken a toll.”

An undercurrent of racial tension also continues to run through Crown Heights. It exploded in 1991 when a car escorting the Lubavitcher rebbe home from a visit to the cemetery where his late father-in-law was buried accidentally ran into a pair of young black children playing on a corner, killing the boy. Several days of rioting broke out and a young rabbinical student, Yankel Rosenbaum, was murdered.

“There is a lot of unspoken tension between blacks and Jews. It’s essentially a segregated community in a lot of ways,” Nehorai said. “After the riots those things left a mark and you can feel it, there’s no question about it. Every now and again something will bubble up.”

Last August, when a Jewish driver accidentally hit a black child riding a bike, angry crowds surrounded the driver. Tension mounted but was eventually diffused after the local Jewish patrol, or Shomrim, and then the police, arrived.

Since late 2013 there have been so-called knockout attacks, in which Jewish residents – adults and children – are punched in the head in unprovoked attacks. In December 2013 New York City Councilwoman Laurie Cumbo seemed to blame the Jewish community for becoming a target. She said that while she had campaigned for the election that took place the previous month, “many African American/Caribbean residents expressed a genuine concern that as the Jewish community continues to grow, they would be pushed out by their Jewish landlords or by Jewish families looking to purchase homes.”

She later apologized to the Crown Heights Jewish community. A 12-year-old girl returning from a grocery store was attacked in October by a black man on a bike, who rode behind her, tripped her and punched her.

The Chabad house in Mumbai, India, was attacked by terrorists in November 2008 and the young couple who serving as Lubavitch emissaries there were murdered.

In Crown Heights and around the world “there are plenty of attacks that happen to Jews,” said Nehorai, who has lived there for three years. “But I always felt like 770 was safe, with the cop car outside and so many Jews around.”

Rabbi Eli Cohen, executive director of the Crown Heights Jewish Community Council, prays daily at 770, he said in an interview, adding that his organization was working closely with city officials. The headquarters synagogue remained closed Tuesday morning as police officers, detectives and forensics agents conducted their investigation, but was re-opened for services in the early afternoon. “People will have to figure out what’s the right way to provide security without diminishing the ability of the community to use the synagogue in the way that they have,” he said.

“While we are very pained by everything that has unfolded, we are very grateful to the police for their quick response and are working closely with the authorities in their ongoing investigation,” said Rabbi Motti Seligson, a spokesman for Chabad-Lubavitch, in a statement. “We commend the heroic efforts of the individuals who were present and took immediate action, if not for their intervention the outcome could have been, G-d forbid far worse. We continue to pray for the young man, who is in stable condition.”

The stabbing victim was put into a medically induced coma and transported from Kings County Hospital to Bellevue Hospital, in Manhattan, early Tuesday, which is better equipped to perform the brain surgery he may require.

Will Chabad Rethink Open Door Policy After ‘I Will Kill Jews’ Attack?