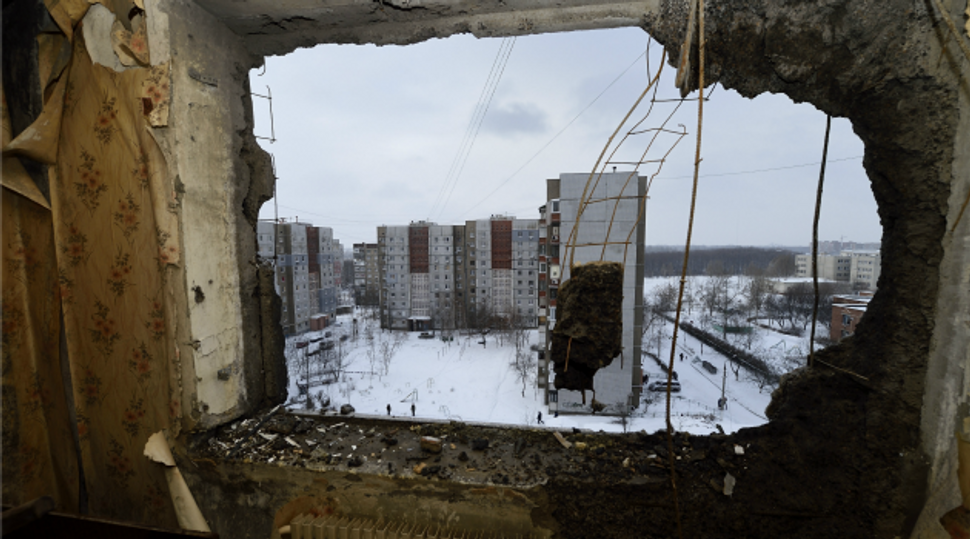 (JTA) — In an unheated synagogue with no running water, a dozen Jews are trying to keep warm as temperatures here veer toward the single digits.

Not moving too much helps keep the warmth under their thick coats, they say, a technique developed as the group gathered at least once a week to maintain a sense of community in a city torn by ongoing conflict between pro-Russian rebels and the Ukrainian army.

“We usually stay for about two hours,” says Igor Leonidovich, the synagogue’s gabbai, or caretaker. “We pray for peace. In this cold, two hours is enough.”

Half of Lugansk’s population of 425,000 has fled since July, when the fighting that claimed some 4,500 lives erupted in the Donbass region of eastern Ukraine.

Among those who fled were two-thirds of the city’s nurses and doctors, according to the World Health Organization, rendering medical services almost nonexistent.

Earlier this month, a psychiatric institution in the Lugansk suburb of Slavyanoserbsk reported that 50 of its patients died from cold and exhaustion. Like many parts of Lugansk and the surrounding area, the hospital had no electricity, heat or water.

About 2,000 Jews remain – a fifth of the Lugansk prewar community – but even that determined group is struggling now that the winter cold has arrived.

“We stay because it’s our birthplace, our land,” says Leonidovich, who draws encouragement from the fact that fighting in Lugansk proper has largely died down in recent weeks after a truce went into effect in September. “We don’t want to leave, but it’s getting harder to stay because of winter.”

Near the synagogue, a few elderly people rummage for blankets in heaps of uncollected garbage on a street scarred by mortar craters and littered with the carcasses of abandoned pets. In the distance, explosions can be heard echoing from the suburbs.

As they face these hardships, Lugansk Jews have received assistance from international Jewish groups, including food from the American Jewish Joint Distribution Committee, or JDC, and the International Fellowship of Christians and Jews, or IFCJ. The distribution of the packages has been coordinated in part by the Lugansk Chabad emissary in exile, Rabbi Shalom Gopin, who is in Israel.

Earlier this month, some 300 people gathered at the synagogue to receive food packages from the IFCJ, the second such distribution in recent weeks. The donation of a generator last month provided the synagogue with lights for the first time since the power went out in August.

On Hanukkah, which begins Tuesday evening, the community plans to light candles in the synagogue during the day because of a rebel-imposed curfew that restricts movement after dark. Traveling at night also increases the chance of falling prey to the robbers and looters who have emptied the city’s supermarkets and car rental agencies.

Being openly Jewish in Lugansk is not particularly dangerous because the rebels who control the city generally do not display anti-Semitic attitudes, Leonidovich says.

Asked whether Lugansk was in any way extra dangerous for Jews, a rebel officer who identified himself only as Vladimir tells JTA, “There is no racism here. If a person, Jewish or Christian, is law abiding, they will not be harmed.”

Even without being specifically targeted, the dangers in Lugansk are evident. In July, the Jewish community lost two of its members, Svetlana and Anna Sitnikov, in the fighting. The mother and daughter died instantly when a mortar round exploded outside a grocery where they had gone to fetch food for Anna’s 5-year-old son.

Like many septuagenarians here, Ernst Kuperman, one of the synagogue regulars, has not been able to collect his pension for months. He gets by thanks to JDC’s Hesed program, which provides the needy with food and medical services.

Others, like Anna Sosnova, who was wounded over the summer by an explosion near her home, would have left but stayed because of family obligations. Sosnova’s house has electricity, but she still had to get a generator to administer drugs to her mother, a bedridden diabetic with only one leg.

“There is no way currently to safely get her out,” Sosnova says.

During the fighting, a mortar round exploded near the small house that the Sosnovas share with three cats and a puppy left behind by neighbors. The explosion weakened an external wall and the house has been slowly collapsing, developing cracks and shifting. Some doors can’t be closed.

“I hope it won’t collapse on us,” Sosnova says.

Across the city, many buildings carry similar scars from the shelling that brought life here to a halt this summer. The situation is even worse in the outskirts, where vast sunflower fields that should have been harvested in the fall are withering in the snow along roads dotted with burned-out tanks that lead to shelled ghost towns.

Before the fighting, the Beit Menachem Jewish school here had more than 150 students. But they never returned to school after the summer vacation and now are scattered across Russia, Israel and Ukraine, according to Sergei Kreidun, the principal.

Although the school is empty, Kreidun still arrives daily to deter looters. He shows off the spacious campus, which has a small Holocaust museum and kosher kitchen, with a mix of pride and melancholy. Pride for what he has helped build over the past 15 years with funding from the Ohr Avner Foundation, melancholy over what became of the school.

“As you can see, we’re ready for the kids here,” he says, gesturing toward a locker containing a former student’s books and hairbrush. “Now all we need is the peace that will bring them back.”