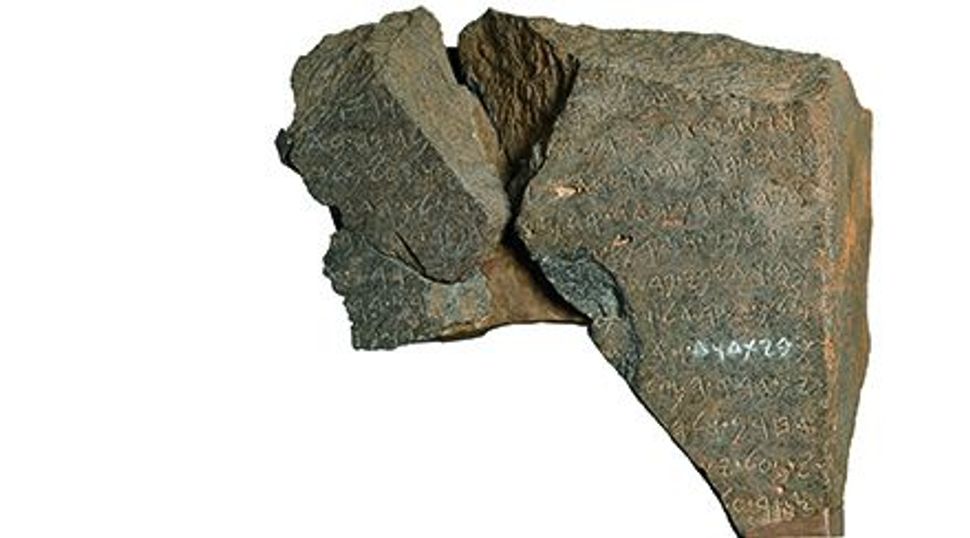 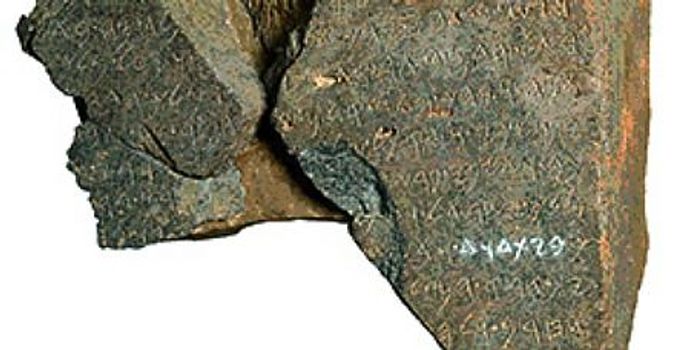 Image by metropolitan museum of art

(JTA) — Dimly lit, the stone slab, or stele, doesn’t look particularly noteworthy, especially when compared to the more lavish sphinxes, jewelry and cauldrons one encounters en route to the room where it is installed.

Indeed, in a Twitter post this fall, art journalist Lee Rosenbaum described the nearly 13-by-16 inch c. 830 BCE rock, which resembles an aardvark or elephant, as “homely.”

What’s significant about this stone — on view at the Metropolitan Museum of Art as part of its “Assyria to Iberia at the Dawn of the Classical Age” exhibit running through Jan. 4 — is its inscription, which is the earliest extra-biblical reference to the House of David.

“There is no doubt that the inscription is one of the most important artifacts ever found in relation to the Bible,” Eran Arie, curator of Israelite and Persian periods at the Israel Museum, wrote in the exhibit catalog.

As is to be expected with a rock nearly three millennia old, the slab is missing considerable portions, and Arie’s translation of the remaining 13 lines of text is full of ellipses and bracketed additions. What is clear is that the Aram-Damascene king Hazael brags of having killed 70 kings, including of Israel and of the “House of David.” (The round number, scholars agree, is probably exaggerated, although Hazael did have a reputation for being ruthless and successful.)

The breaks in the stone neither obstruct nor obscure the “bytdvd,” or House of David, inscription, which remains “absolutely intact and clear,” said Ira Spar, professor of history and ancient studies at Ramapo College in New Jersey and a research Assyriologist at the Metropolitan Museum.

Epigraphers and biblical historians agree almost unanimously that the letters “bytdvd” refer to the House of King David, according to Spar.

“While it is clear that David was king of Israel, the archaeological evidence for the extent of his kingdom remains unclear,” he said.

Despite its “extraordinary inscription,” the rock, a seventh century BCE “Annals of Sennacherib” that tells of a siege of Jerusalem mentioned in the Bible, and a 10th-century BCE “Taanach Cult Stand” that may feature a depiction of the Jewish God, have been “curiously” ignored in reviews of the Met’s exhibit, notes the Biblical Archaeology Society website.

Steven Fine, a professor of Jewish history and director of the Center for Israel Studies at Yeshiva University, agrees that the lack of attention is curious.

“It’s astonishing how little the Jewish press has noticed it,” he said.

Although the inscription has received scant attention, Fine says he has observed widespread public interest in biblical-era artifacts. When he led tours as curator of the University of Southern California’s archaeological collections in the 1980s, Fine reported hearing many “oohs” and “aahs” when he showed an oil lamp from the First Temple period.

“Why? Because they heard about King David,” he said.

“People care about this stuff. They don’t care about the Middle Ages that much. They care about biblical history … and it’s part of the grappling with secularization that makes this so important to some people.”

Even without this latest piece of evidence, Rabbi David Wolpe, author of the 2014 book “David: The Divided Heart,” said in an interview that there was near-unanimous consensus among scholars that David existed. But Wolpe, of the Conservative Sinai Temple in Los Angeles, added that “the size and scope of his kingdom were probably far less than was once thought.”

In the catalog for the “Assyria to Iberia” exhibit, the Israel Museum’s Arie wrote that the inscription’s matter-of-fact invocation of David’s name just some 150 years after his reign amounts to a “clear indication that the ‘House of David’ was known throughout the region and that the king’s reputation was not a literary invention of a much later period.” This, he adds, “clearly validates the biblical description of a figure named David becoming the founder of the dynasty of Judahite kings in Jerusalem.”

Fine also thinks that most scholars accept a historical David, but he notes that some — those who align themselves with what is known as the Copenhagen School of biblical interpretation — don’t agree that David is a historical shoo-in.

“These things go in a range,” he said.

Although archaeologists tend broadly to be uncomfortable with text, Fine says, some might say that if there is a King David, he is “just a name” about whom we don’t know anything, while others would view David through the “eyes of Jewish history” and law.

Fine says public interest in biblical-era artifacts is good for the field, even if it is sometimes oversimplified on popular television programs.

“There wouldn’t be a field if it wasn’t for all this interest,” he said. “All of us started as little kids with that kind of stuff.”