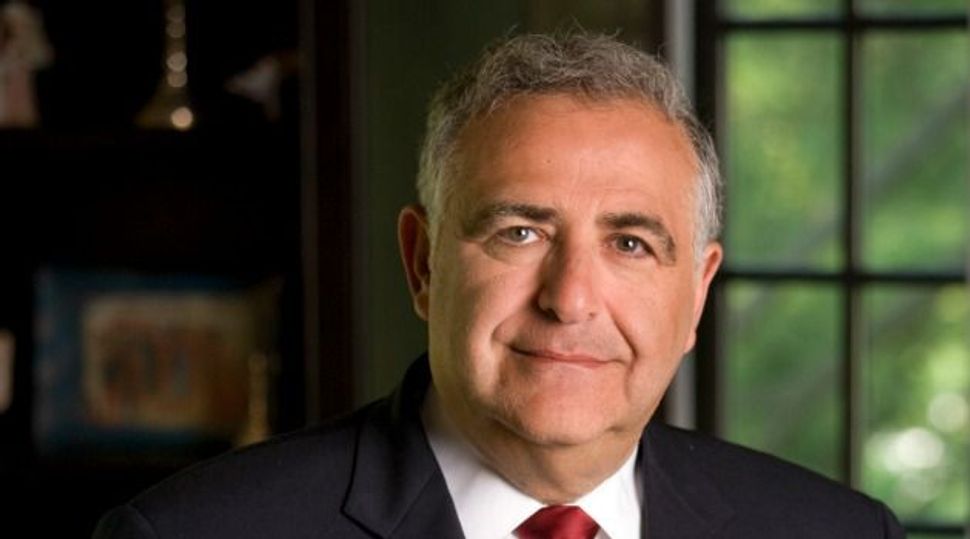 The Buck Stops: Richard Joel has led Yeshiva since 2003. Some critics say that’s long enough to accept blame for any managerial shortcomings at the fiscally challenged university. Image by yeshiva u.

Joel blamed several current and former members of staff, as well as the university’s “antiquated and opaque” accounting systems, for concealing the true scale of Y.U.’s deficits.

In an interview with a university newspaper, The Commentator, Joel said his former chief financial officer, J. Michael Gower, had failed to give him a full picture of the university’s financial health.

Gower, who was hired five years after Joel, in 2008, resigned from Y.U. last year. He is now Rutgers University’s senior vice president for finance. He declined to comment on Joel’s remarks.

Joel also blamed some of his department heads for lying to him and to Y.U.’s deans about the financial health of their departments in monthly reports that were delivered verbally rather than in writing.

“We relied on an oral tradition rather than a written tradition,” Joel told The Commentator.

Joel said that this misinformation, in addition to Y.U.’s outdated financial system, had concealed the severity of Y.U.’s financial troubles.

He said the problems had been compounded because he relied upon a distorted financial picture as he invested in faculty, student services and programs that the university could not afford.

Christine Letts, an expert in not-for-profit management at the Harvard Kennedy School, said: “It seems as though [Yeshiva University is] admitting to gross lapses in procedures. I don’t understand why the board doesn’t hold [Joel] accountable and fire him.”

Letts added that Y.U.’s board is ultimately responsible for the university’s finances.

“It sounds like they’re shirking their responsibility and letting [Joel] get away with this, too,” she said.

A member of the faculty at Y.U. who did not wish to be named said: “The president keeps absolving himself for managerial mistakes that happened under his watch — people he had responsibility to choose and monitor and who failed. He blasts spending in programs catered to the community as if he had nothing to do with it.”

The Forward asked a Y.U. spokesman whether Joel was misquoted in the interview. The spokesman did not respond.

Steven Windmueller, an expert in not-for-profit management and a professor emeritus at Hebrew Union College-Jewish Institute of Religion, in Los Angeles, said Y.U.’s troubles are indicative of problems across the Jewish communal world.

Windmueller said that top administrators like Joel are hired because of their vision and their passion for contributing to the community.

Such leaders often prioritize improving the outward-facing aspect of their institution and attracting talent over infrastructural improvements, like back-office administrative systems.

“I am aware of other organizations that simply did not put into place in an appropriate time frame all possible infrastructural controls to [catch] problems at an earlier point,” Windmueller said.

Windmueller declined to name the Jewish organizations he had in mind because he said that he consulted for several of them and had signed confidentiality agreements.

Joel’s interview was published December 10, one day after the credit ratings service Moody’s reported that a deal to offload Y.U.’s costly medical school had been terminated.

Y.U. has operated deficits of up to $100 million for each of the past six years. Consultants who were brought in to turn around Y.U. say that two-thirds of the university’s deficits are attributable to Albert Einstein College of Medicine.

This past summer, Y.U. signed a memorandum of understanding with Montefiore Health System to shift operational and financial responsibility for the medical school to its teaching hospital, Montefiore Medical Center.

The deal, which would leave Y.U. as the degree-granting institution, had the potential to reduce Y.U.’s deficits by tens of millions of dollars.

When the plan was announced in May, Joel hailed it as an important milestone along Y.U.’s road to recovery.

A spokeswoman for Montefiore told the Forward on December 10 that the plan was terminated around Thanksgiving because “the talks were not progressing.”

After the deal’s termination, a source with knowledge of the talks told Crain’s New York Business that negotiations were ongoing.

A source at Montefiore, speaking on condition of anonymity, could not confirm this. But the source, who did not wish to be identified because of the situation’s sensitivity, did say that Montefiore remains interested in a deal.

A member of the Einstein faculty, who also asked not to be named, said a majority of their colleagues supported the move to Montefiore and hoped a deal could be reached.

As long as Einstein remains a part of Y.U., it continues to drain the university’s finances.

Moody’s reported that Y.U. suffered “acute losses” in the second half of this year because it delayed cost-cutting measures at the medical school while negotiations with Montefiore continued.

The Moody’s report added that the termination of the Memorandum of Understanding would extend Y.U.’s “operating challenges.”

The spokesman for Y.U. said: “The university is keeping all options on the table to ensure a secure future of excellence for Einstein and the entire university. We believe our financial outlook allows us to meet the goal of responsibly achieving financial stability over the next three years.”

In his interview with The Commentator, Joel said Y.U. had taken measures to stem the deficits.

He said that a turnaround firm, Alvarez & Marsal, audited the university and proposed cost-cutting measures. This academic year Y.U. has reduced spending across its schools by $20 million, with the exception of Einstein.

Joel said that Y.U also has a much better grasp on its finances since the implementation of a centralized accounting and information system called Banner, which was introduced in January 2013 and slowly rolled out across the university.

Nicholas Hillman, an assistant professor in the [School of Education at the University of Wisconsin-Madison, said he was surprised that Y.U. had only recently implemented a system like Banner. “Colleges have had Banner — or an equivalent — for 20 years at least,” Hillman said. “The fact they didn’t have that is striking.”

In its credit report, Moody’s noted that Y.U. has “greatly improved financial monitoring and reporting.”

Moody’s left its junk status rating — B3 — for Y.U.’s debt unchanged. But it gave Y.U. a negative outlook based on the risk that the university may run out of cash before it is able to execute a turnaround plan.

Joel told The Commentator that he had several ideas to generate revenue at Y.U. They included an expansion in graduate programming and in so-called “blended learning,” in which some study is directed online.

But Joel also said that Y.U. would have to trim faculty costs further.

At a Y.U. faculty council meeting held on Friday, December 12, staff who have endured voluntary redundancies, salary freezes and other cost-cutting measures wanted to know what the termination of the Memorandum of Understanding meant for them.

Y.U.’s provost, Selma Botman, told faculty that she was surprised and saddened when she learned that the deal between Montefiore and Y.U. had been terminated.

But Botman told faculty that she got the sense from people involved in the negotiations that there was still a sense of optimism that a deal could be struck.

Though Botman emphasized that she was not involved in the negotiations, she pointed out that the university and Montefiore share a common interest in seeing the deal succeed.

David Carlson, a member of Y.U.’s faculty council who was at the meeting, said, “I think it’s fair to say there is a tremendous tension and fear for the future among the faculty.”

Carlson added: “The view is that people entirely innocent of bad judgments over the past few years are being made to pay the price for those bad judgments. Of course that’s how it always is when management makes bad errors.”