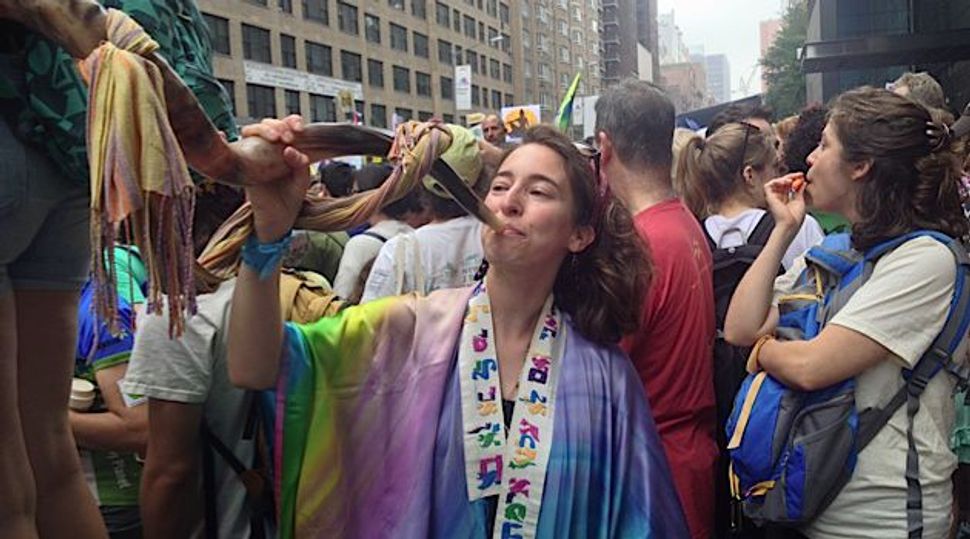 Jews for Change: The People’s Climate March in New York in September 2014 marked the first participation of many Jewish institutions in the climate movement. Image by Hody Nemes

When it comes to climate change, there’s a powerful wind blowing these days. Not the wind coming off deadly Typhoon Hagupit, which lashed the Philippines, nor even the hot air coming from the mouths of climate deniers like incoming Senate Majority Leader Mitch McConnell.

I’m talking about the wind in the sails of the climate change movement, which had a banner year in 2014. For starters, the U.S. and China finally agreed to limits on greenhouse gas emissions, a deal that had eluded negotiators for a generation. Investors and institutions representing over $50 billion, including Stanford University and the oil-steeped Rockefellers, have now committed to divesting from fossil fuel companies. And just this past month, New York Governor Andrew Cuomo made a surprise decision to ban hydrofracking, a controversial method of mining natural gas.

But it was the September 21 People’s Climate March that really made 2014 the year of climate change activism. About 400,000 people marched through the streets of New York in the largest march ever for strong action on climate change, which was part protest, part vigil and part cacophonous celebration.

The march marked the first participation of many major Jewish institutions in the climate movement: With the exception of the Orthodox, the major Jewish branches signed on, and one in 10 co-sponsoring groups was Jewish. Jewish climate activists are expecting Jews’ heavy involvement in the climate march to carry over into the new year, from synagogues going green to Jewish institutions exploring fossil fuel divestment, a tactic that faces an uphill battle in a community that associates divestment with the Boycott, Divestment and Sanctions movement that targets Israel.

Beyond merely energizing activists, the climate march helped shed a spotlight on the UN climate change summit in Lima, Peru, held in November, a last-ditch attempt to achieve a serious global climate treaty sought since the late 1980s. At the Lima summit, in the wee hours of December 14, all the nations of the world agreed for the first time to set limits on their greenhouse gas emissions. But there’s a catch: under the Lima agreement, every country gets to choose how much to reduce its emissions, and there’s no way of enforcing even these self-imposed limits.

This spring, we’ll find out how far each country is willing to go when they announce their emissions targets. If all goes well, those targets will be finalized in a groundbreaking treaty next December at a UN climate conference in Paris — which is sure to be a nail-biter, as rich and poor countries will have to overcome lingering disagreements over how to divvy up responsibility for climate change. Developing countries particularly want the developed world to follow through on the $100 billion it promised to donate per year to help them adapt to climate change, though only about $10 billion has surfaced so far. Many developing countries, including China, will likely continue opposing U.S.-led efforts to establish international oversight over emissions cuts. Keep an eye on India, the world’s third largest emitter, and Russia, the fifth largest, which have both shown reluctance to follow the United States and China in cutting emissions. Though the details of the Paris agreement are still up in the air, experts doubt that the emissions cuts will come close to keeping greenhouse at levels low enough to avoid catastrophic climate change. Whoops.

Meanwhile, the climate train is barreling forward without us: Droughts are getting dangerously long, storms terrifyingly powerful, and our coastal cities are under attack by the sea.

But some people haven’t gotten the message. In 2015, control of Congress will swing to the Republican Party, one of the most virulently climate-denying political parties on the planet. Republicans have promised to immediately approve the controversial Keystone XL pipeline and launch a frontal attack on the Environmental Protection Agency, which is working on regulations to reduce emissions from coal plants.

Oh, and there’s that little presidential election coming in 2016. Keep an eye on how far Republican candidates are willing to depart from the scientific consensus on climate change: In the 2012 election, only one Republican candidate, Utah Governor Jon Huntsman, fully embraced climate science.

But climate activists in 2014 showed that they not only know how to yell, but also how to flirt: Next year, look for more #climatepickuplines, a recent Twitter phenomenon. Gems include, “Don’t say you’ve got a girlfriend, ’cuz that would be an Inconvenient Truth,” and my personal favorite, “Babe, my fantasies about you must be tar sands, because they’re the dirtiest.”