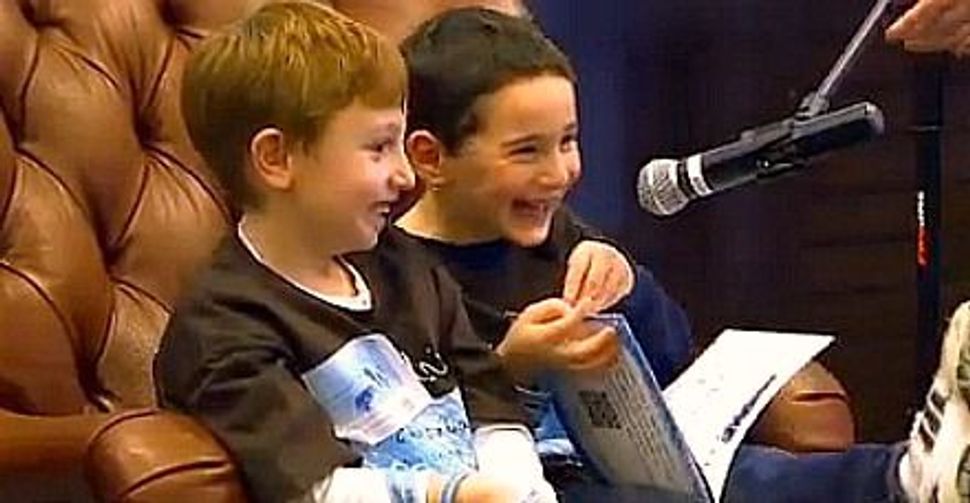 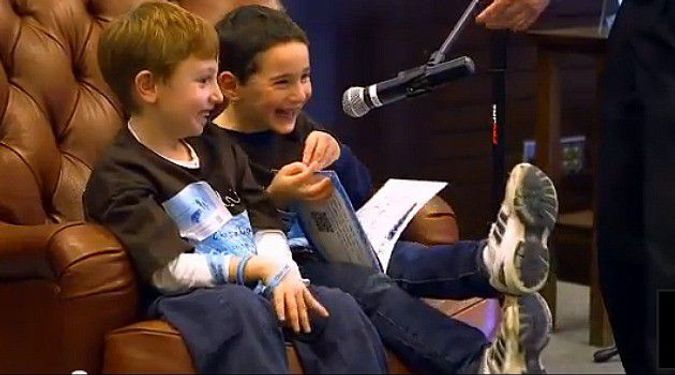 One Sweet Mitzvah: Dylan Siegel, left, wanted to raise money for a cure when he found out his friend Jonah Pournazarian had a rare genetic disease. So he wrote a book. Image by youtube

(JTA) — A fundraising campaign started quietly by two first graders two years ago to help find a cure for a rare genetic disease just passed the $1 million mark, with donations streaming in from all 50 states and 60 countries across the globe.

The million-dollar achievement has been celebrated as the perfect feel-good story, but the trigger for this global effort was a somber diagnosis at the birth of Jonah Pournazarian.

The playful, redheaded youngster was born weighing four pounds and with an extremely rare metabolic malfunction, known as Glycogen Storage Disease, or GSD.

GSD predominantly afflicts children, targeting different parts of the body. Jonah’s case is identified as Type 1b, in which glucose is stored in the liver and “can’t get out,” says his doctor. (Type 1a of the disease affects mainly Ashkenazi Jewish kids.)

Because Type 1b of GSD is so rare – fewer than 100 children in this category have been identified in the United States — that medical researchers and potential grant givers have long ignored it.

One 6-year-old wasn’t willing to ignore it, however.

Dylan Siegel, now 8, was Jonah’s best friend at the Wise School, affiliated with Stephen Wise Temple, a large Reform congregation in West Los Angeles – and he wanted to do something.

When he heard his mother talk about an effort to raise money among the temple’s members to support the work of a leading GSD researcher, Dylan said he, too, wanted to give some money.

As Dylan’s mom, Debra Siegel, recalls, “I suggested to Dylan that he set up a lemonade stand, but he said he wanted to write a book.” She took her son’s plan as a childhood fantasy, but the next day Dylan presented his parents with the finished product.

The cover of the richly illustrated 14-page booklet reads “Chocolate Bar by Dylan Siegel,” and the tone is set is set in the first entry, which reads, “I like to go to Disney Land. That is so Chocolate Bar.”

Other “Chocolate Bar” (read “awesome”) experiences recalled by the young author/illustrator include going to the swimming pool, aquarium, bowling alley and so forth, ending with “I like to help my friends, that is the biggest Chocolate Bar.”

As with almost every first-time author, the writing was just the beginning. Dylan kept pushing the project, drafting his marketing consultant father for the production phase of the project, with an initial print run of 200 copies.

At the temple’s Mitzvah Day, the two boys and their parents sold enough autographed books (at $20 each) and $5 chocolate bars (donated by a neighborhood market) to raise about $7,000.

Augmenting the sales force were the boys’ two teachers, Orlee Raymond and Kimberly (Kim) Snyder, sporting T-shirts that read “1st Grade Is So Chocolate Bar.” (Full disclosure: Raymond is this reporter’s daughter and tipped him off about the story.)

In late 2012, the Los Angeles Jewish Journal ran an article about Jonah and Dylan and their mission to help find a cure for GSD. The article came to the attention of an NBC producer, who asked Chelsea Clinton, then doing feature segments for the network, to look into the story. She did, and the story aired on the national NBC evening news a short time later.

Amid the media’s generally gloomy string of disaster news, the Chocolate Bar segment resonated with viewers. Other major TV networks, newspapers and social media spread the story across the globe, and the results have been spectacular.

Every Chocolate Bar dollar supports the GSD research of Dr. David A. Weinstein, initially at the Harvard Medical School and now at the University of Florida in Gainesville, where he directs the largest GSD treatment and research program in the world.

The disease was almost always fatal until 1971, when researchers developed the first effective therapy for GSD. A major breakthrough came a decade later with the discovery of a simple “medication” in the form of cornstarch, injected through a surgically implanted feeding tube.

However, the prescribed doses have to be administered every three hours, without fail, and missing just one dose can lead to a hospital stay or even death.

Weinstein’s research, entirely underwritten by the Chocolate Bar campaign, has been able to extend the intervals between feedings, and his aim is to give his patients (and their parents) full nights of uninterrupted sleep. In the long run, he is looking toward gene therapy as a cure, something that has been successful in dogs. He hopes to start trials on humans when the federal Food and Drug Administration gives the green light.

Weinstein, who visits Israel frequently on a collaborative project at Sheba Hospital, is upbeat about Jonah’s future.

“Our treatment is working,” he said, “and I expect Jonah to do very well.”