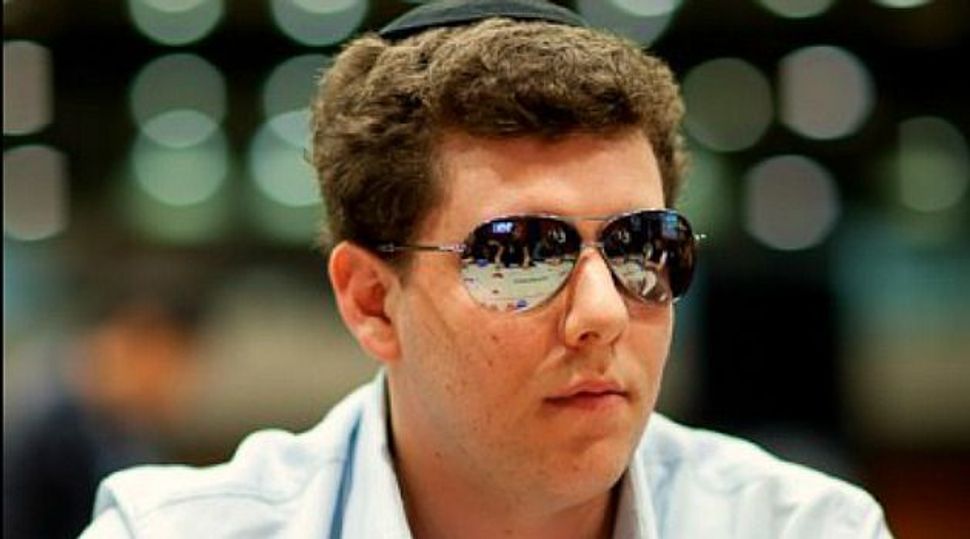 (JTA) — Ari Engel is homeless. It’s been a decade since he last held a regular job and two years since he gave up his apartment.

But don’t shed any tears for him.

Over the last 10 years or so, Engel has grossed about $5 million playing poker.

The son of an Orthodox rabbi, Engel, 31, has become one of the world’s best professional poker players – ranked No. 23 worldwide by the poker magazine Bluff – and probably the only top-tier player who wears a kipah.

When Engel decided to give up his Toronto apartment in early 2013, it was to go on the road to play the tournament circuit. In November alone, Engel competed in Peru, St. Maarten and the Dominican Republic, where he won $136,500.

“I travel all the time – I’m sort of homeless,” Engel told JTA in a recent phone interview from Atlantic City, N.J., where he was competing. “I’m never in the same place for more than a couple of weeks.”

Traditional Jewish law frowns upon gambling, but Engel, who keeps kosher and often wears his kipah during play, says poker isn’t gambling but a learned skill. He concedes there is an element of chance, but no more so than with stock picking.

“To me it’s very unfortunate that poker takes place in casinos. It doesn’t really belong there,” Engel said. “Poker definitely has a lot of things that are beyond one’s control, but it has plenty of things within your control. I don’t gamble at all. I’m trying to get an edge when I play poker, and I try to make a living out of it.”

Sometimes the kipah plays to Engel’s advantage, he says, as it prompts opponents to underestimate his abilities. More commonly, other players or passers-by will drop a little hint – perhaps a greeting in Yiddish or Hebrew – to indicate that they, too, are members of the tribe.

Engel, who bears some resemblance to Jesse Eisenberg’s portrayal of Mark Zuckerberg in “The Social Network,” says he’s never gotten any negative reactions to his Jewish identity.

At tournaments, Engel prepares like an athlete. He tries to get a good night’s sleep, eat a healthy breakfast and work out in the hotel gym. The card playing usually starts at about noon and often runs well past midnight, so stamina is important.

He usually plays Texas Hold’em, a game that starts with two cards dealt face down to each player and three common cards face up, known as the flop. Two additional common cards – the turn and the river – are then dealt sequentially as players check, bet, raise or fold. The players start with the same amount of chips – buy-ins typically range from $300 to $10,000 – and remain in the game until the chips are lost.

Competitors who finish in the top 10-15 percent usually take home some money, with the champion winning the grand prize of 15-25 percent of the total buy-in money.

Engel declined to discuss the particulars of his income, but according to Bluff magazine his largest in-person career win came a year ago at the Heartland Poker Tour in St. Louis, where he finished first among 420 entrants and took home $142,125. According to the online poker forum Pocketfives, he also won $187,669 in an online tournament in May.

Being a card-playing itinerant was hardly the life Engel envisioned for himself growing up. Born in Toronto, Engel and his family moved to South Africa before his first birthday and then to Australia, Jerusalem and Annapolis, Md., before ending up in the Chicago area, where Engel attended a yeshiva high school in Skokie, Ill.

Engel was 17 and a high school senior when he played poker for the first time. He continued into his gap year at an Orthodox yeshiva in the Jerusalem suburb of Mevasseret Zion and then in college at New York University.

But it wasn’t until his second year at NYU that he started playing for real money. His roommate, Andrew Brown, was an avid online poker player and took Engel under his wing. Though Engel majored in finance, he found online poker much more compelling.

After graduation, Engel took a regular job, but the online poker he played nights and weekends turned out to be much more lucrative – and exciting. So he quit after a couple of months to try poker full time.

“Finance was not what I wanted to be doing,” Engel said. “I figured I was 21, single and had no real responsibilities, so why not give it a real shot for a few months and see how I did?”

To his surprise, his parents gave their blessing. Soon Engel was making enough money to chip away at the college debt he had accumulated. He started offering online courses in poker strategy. He loved the independence and the freedom from job responsibilities.

Then came April 15, 2011 – Black Friday in the poker world. The U.S. Justice Department issued indictments against the nation’s leading online poker firms and shut down their websites, charging that they had broken Internet gambling laws and engaged in bank fraud and money laundering. Authorities eventually settled with two of the leading poker companies, PokerStars and Full Tilt, but stipulated that they no longer could serve U.S. customers.

That meant Engel, who was living in Las Vegas at the time and primarily playing online, would either have to stop or leave the country.

“Overnight,” he said, “my profession was radically changed.”

Having had the fortune of being born in Canada, Engel obtained a Canadian passport and moved to Toronto. But he hated the winters. By his second January he was ready to give up online poker to play exclusively in live tournaments. Engel packed up his Toronto rental and has been living in hotels ever since, chasing tournaments.

Though he sometimes plays into Shabbat, he always takes off the Jewish holidays, when he usually goes to visit his parents in South Florida. He also has a sister in New York and a brother in Israel.

“I don’t know if I’ll be playing poker forever, but for the time being I will,” Engel said. “I’ve built a little bit of a nest egg and I have the freedom to follow different opportunities. I just need to keep my eyes and ears open and just be smart about it.”