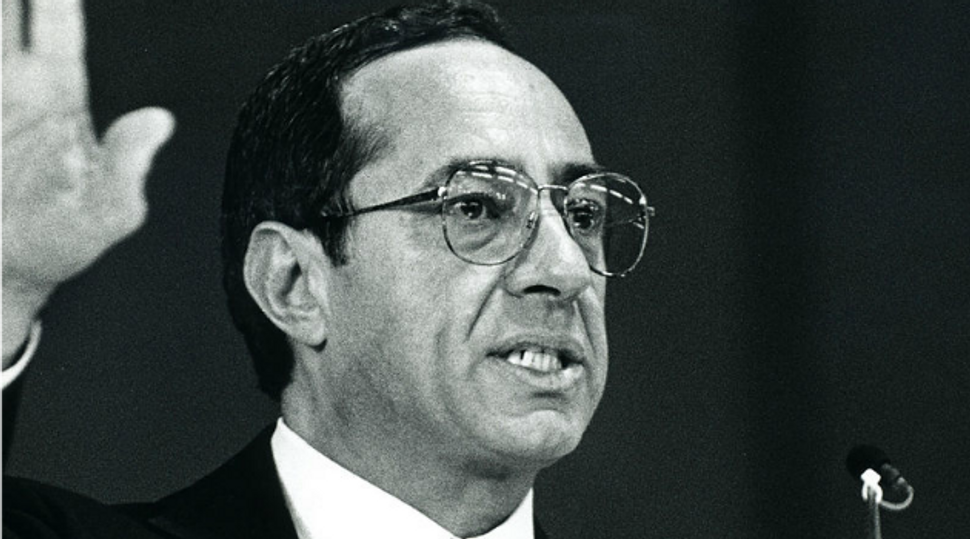 (JTA) — Mario Cuomo, the three-term New York governor who died Thursday, was the rare politician who appealed to the Jewish tent’s opposite poles.

A strident liberal with a nuanced understanding of the sense of vulnerability among the deeply religious in a secular society, Cuomo died of heart failure just hours after his son Andrew was sworn in for his second term as governor. He was 82.

Lopsided Jewish support helped propel Cuomo into the governor’s office three times, in 1982, 1986 and 1990. The state’s large Jewish community joined other liberal constituencies in celebrating the man who emerged in the 1980s as the most prominent vanguard against President Ronald Reagan.

Cuomo, addressing a gathering of Holocaust survivors in 1985, faulted Reagan for all-too-blithely ignoring Germany’s past when the president agreed to mark the 40th anniversary of D-Day at a cemetery containing the graves of SS officers.

“The truth is, even those who are free of anti-Semitism — even those who are almost certainly sincere in their revulsion at the Holocaust — are tempted to forget, to declare this ugly chapter of human history closed, done with, over,” Cuomo said.

The jibe was of a piece with rhetoric that helped vault Cuomo to national prominence the previous year, when he keynoted the Democratic national convention in San Francisco. Reagan’s sunny conservatism was appealing, Cuomo acknowledged, but ignored harsh realities.

“A ‘shining city’ is perhaps all the president sees from the portico of the White House and the veranda of his ranch, where everyone seems to be doing well,” Cuomo said. “But there’s another city, another part to the shining city, the part where some people can’t pay their mortgages and most young people can’t afford one, where students can’t afford the education they need and middle class parents watch the dreams they hold for their children evaporate.”

Cuomo credited his sensitivity to the needs of the Orthodox to his childhood in Queens, where he served as a “Shabbos goy” for a synagogue up the street from the grocery owned by his Sicilian immigrant parents.

The job clearly left an impression. He recalled sharing the experience with Branch Rickey, the baseball executive who integrated the sport when he hired Jackie Robinson for the Brooklyn Dodgers.

“When I told him that I had been an altar boy and a ‘shabbos goy,’ he wanted to know all about it,” Cuomo told a Rickey biographer.

Cuomo created an office of assistant to the governor for Jewish affairs, and broke with his party’s liberal wing on a number of church-state issues.

He helped Kiryas Joel, an ultra-Orthodox enclave in Orange County, maintain a separate school district despite a U.S. Supreme Court ruling to the contrary.

The website for his unsuccessful 1994 bid to win a fourth term noted that he established the Kosher Food Advisory Council. “He has consistently pushed for stronger enforcement of kosher regulations,” it said.

He also backed a bill that allowed an ultra-Orthodox ambulance service, Hatzolah, to expand its service.

During his 1990 election campaign, Cuomo beamed when he earned the effective endorsement of the Lubavitcher rebbe, Menachem Mendel Schneerson, who handed him two of the dollars he traditionally give out to supplicants for good luck – one for the election, and one for his third term.

“This is more than I expected, rabbi, and this will require me to give back more, which I will,” Cuomo said, sporting a silver-bordered black kippah. Cuomo’s sensitivity to Jewish issues extended beyond the delicate church-state balance the observant must navigate. He was an unstinting Israel supporter, visiting the country in 1992.

“Until you come here, you know the words but don’t understand the music,” he said.

Cuomo banned the state from doing business with anyone who complied with the Arab boycott and expanded business relations with Israel.

Cuomo criticized New York Mayor David Dinkins’ handling of the 1991 riots in Crown heights, which pitted blacks and Orthodox Jews against one another and which resulted in the death of Yankel Rosenbaum. Cuomo appointed an investigative committee, which eviscerated the city’s handling of the riots.

“Mario Cuomo was someone who understood both the needs of the Jewish community on a practical level but also on an emotional one,” said Ezra Friedlander, an Orthodox lobbyist. “Mario Cuomo was a man of faith who understood with every fiber of his body the accommodations that government has to provide to communities of faith to flourish including the Jewish community.”