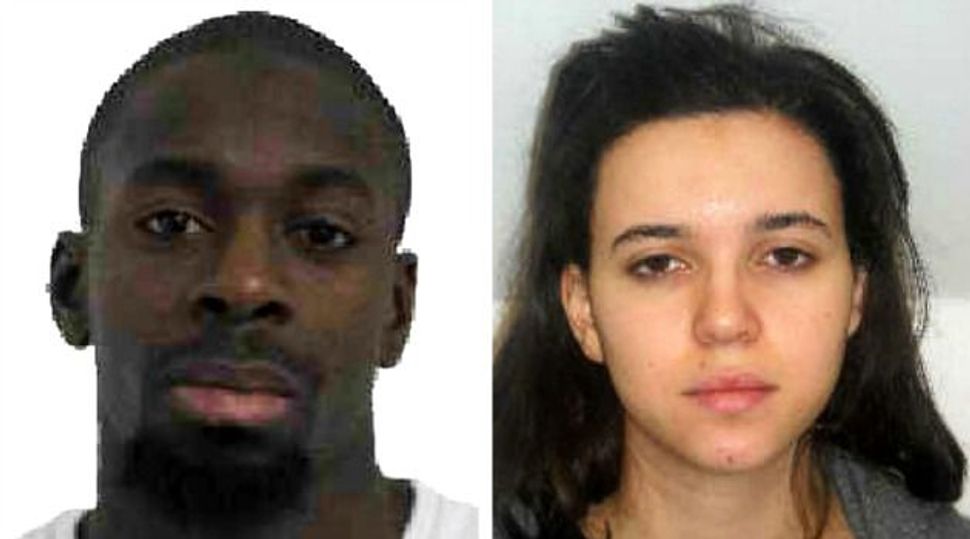 French police were still hunting Saturday for the girlfriend of the slain terrorist who killed four hostages at a Paris kosher grocery store — and several reports say she fled to lawless Syria.

Hayat Boumeddiene, 26, whose boyfriend Amedy Coulibaly was killed when police stormed the grocery, apparently escaped the bloody scene and was on the run.

A source familiar with the situation said that Boumeddiene left France last week and traveled to Syria via Turkey.

“On January 2, a woman corresponding to her profile and presenting a piece of identity took a flight from Madrid to Instanbul,” a source familiar with the situation told Reuters.

The source said she was accompanied by a man and had a return ticket for January 9, but never took the flight. He said that Turkish authorities have signaled that she passed the border with Syria on January 8.

Turkish security said it was working with France to track down Boumeddiene. But Islamic terror groups including Islamic State militants control much of Syria, making it unlikely that Western forces would be able to find or arrest her.

A senior Turkish security official said there had been no warning issued about Boumeddiene.

“There was no warning about her from the French security services or government. After they informed us about her. We identified her mobile phone signal on Jan. 8. We think she is in Syria at the moment,” the source said.

Those reports would contradict earlier police statements that Boumeddiene helped carry out the shooting of a policewoman with Coulibaly in Paris on Thursday.

“All our services are focused on looking for this person,” national police chief Jean-Marc Falcone told BFM-TV television. “We call on her to put herself in the hands of justice.”

An official police photograph shows a young woman with long dark hair hitched back over her ears. French media, however, released photos purporting to be of a fully-veiled Boumeddiene, posing with a cross-bow, in what they said was a 2010 training session in the mountainous Cantal region.

French media described her as one of seven children whose mother died when she was young and and whose delivery-man father struggled to keep working while looking after the family. As an adult, she lost her job as a cashier when she coverted to Islam and started wearing the niqab.

Le Monde said Boumeddiene wed Amedy Coulibaly in a religious ceremony not recognized by French civil authorities in 2009. The two were questioned by police in 2010 and Coulibaly jailed for his involvement in a botched plot to spring from jail the author of a deadly 1995 attack on the Paris transport system.

Cops were questioning the wife and girlfriend of the two other terrorists who killed 12 people at Charlie Hebdo magazine, since the women were all apparently close friends.

Boumeddiene’s cell phone showed hundreds of calls to Izzana Hamyd, the wife of Cherif Kouachi, and a girlfriend of his brother.

She was France’s most wanted woman after the gunfire and bloodshed ended at the grocery and a printing factory, where the Kouachi brothers were also slain by police in a gun battle.

Police said it’s not known if Boumeddiene, who was once pictured in a skimpy bikini on vacation with Coulibaly, was inside the grocery and eluded capture — or if she bailed on her boyfriend before his final bloody act of terror.

Even before the grocery siege, the couple were both wanted in connection with the murder of a policewoman in the Paris suburb of Montrouge Thursday.

Coulibaly called BFM-TV during the grocery standoff, saying he wanted to defend Palestinians and target Jews.

The criminal record of Coulibaly, who is 32, dates back to his teen years, including several armed robbery convictions in 2001.

Coulibaly is believed to have converted to Islam while in prison, where he met Cherif Kouachi, one of the terrorists who carried out the massacre at the offices of Charlie Hebdo magazine.