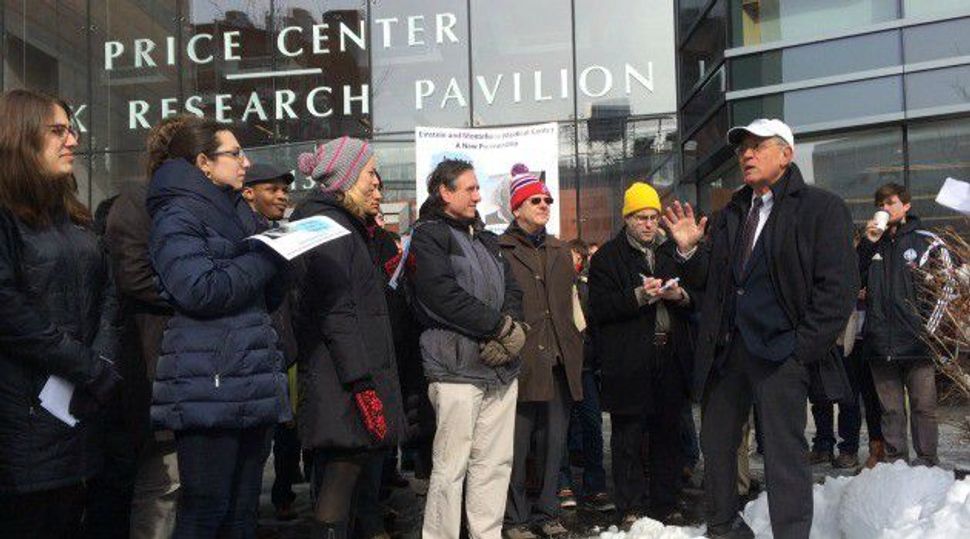 Allen Spiegel, dean of Albert Eintstein College of Medicine, addresses students about the deal between Yeshiva U. and Montefiore Health Systems. Image by paul berger

Yeshiva University has shed the burden of its prestigious but money-losing medical school, the Albert Einstein College of Medicine, amid a financial crisis that has drained $90 million — or 8% — of its endowment in the past year,

The university still faces grim financial challenges, as well as the task of reassuring a faculty that has become increasingly nervous about Y.U.’s future.

But a joint venture between Y.U. and Montefiore Health System, announced February 3, finally wipes a significant deficit off Y.U.’s books.

Einstein is estimated to account for two-thirds of Y.U.’s annual operating deficits, which have reached $100 million in recent years.

In an email to Y.U. alumni, the university’s president Richard Joel said the deal, once completed, would help “propel Y.U. towards its goal of stabilizing its finances within the next three years.”

While the details of the deal remain vague, Y.U. has said previously that Montefiore, which already operates Einstein’s university hospital, would take over operational and financial control of the school itself. Y.U., meanwhile, would continue to be the degree-granting institution for the medical school.

Y.U. and Montefiore issued a joint statement February 3 saying that the deal was “subject to final documentation and regulatory approval.”

“Montefiore and Yeshiva look forward to sharing further details about this historic agreement in the months ahead,” the statement said.

In recent months, Einstein faculty and students had become increasingly fearful that Y.U. might shut down the costly research side of the medical school.

Almost 200 students braved freezing temperatures on the morning of February 3 at a rally outside Einstein’s gleaming Price Center/Block Research Pavilion to show support for a deal with Montefiore.

Four student leaders made brief speeches supporting a partnership between Einstein and Montefiore. Einstein’s dean, Allen Spiegel, dressed in a white baseball cap, thanked students and told them he had just gotten off the phone with Montefiore’s CEO, Steven Safyer, who was still signing the final legal paperwork.

After the rally, Jeffrey Segall, speaker of Einstein’s faculty senate, told the Forward that the merger was “the only way Einstein could stay the top research institution that it is.”

“Montefiore has the funds and the desire to maintain the research as well as the education,” Segall said. “The two of them together are critical to make a top medical school.”

Einstein faculty had grown increasingly frustrated with Y.U. in recent months, particularly after talks between Y.U. and Montefiore, which began last May, broke down at the end of last year.

In early January, 13 faculty chairmen at Einstein sent a joint letter to New York State’s Attorney General, accusing Y.U.’s president, Joel, and Y.U.’s trustees of breaching their fiduciary responsibility to the medical school. At the end of January, Einstein’s faculty senate issued a vote of no confidence in Joel and in Y.U.’s board.

Y.U. did not respond to questions about faculty discontent or about the Einstein faculty letter to the New York State Attorney General.

A Y.U. spokesman did say that the decline in Y.U.’s endowment was caused by the university transferring funds out of its long-term investment pool.

The university has cut costs and sold hundreds of millions of dollars worth of real estate. But yawning deficits persist.

Y.U.’s provost, Selma Botman, told staff at the January 30 faculty council meeting that although Y.U.’s graduate schools and programs, including the Wurzweiler School of Social Work and the Syms School of Business, operate in the black, in future they must produce more revenue while cutting costs.

A member of Y.U.’s faculty who was at the meeting and did not wish to be identified, said Botman wants faculty to teach as much as they can and not think of themselves as researchers.

“Who’s going to want to go to a university in which faculty spends all its time tutoring students instead of building knowledge…that can be transmitted to students?” the faculty member said. That faculty member described the situation at Y.U. as a “race to the bottom.”

Y.U. did not immediately respond to a request for a reply to the faculty member’s comments.