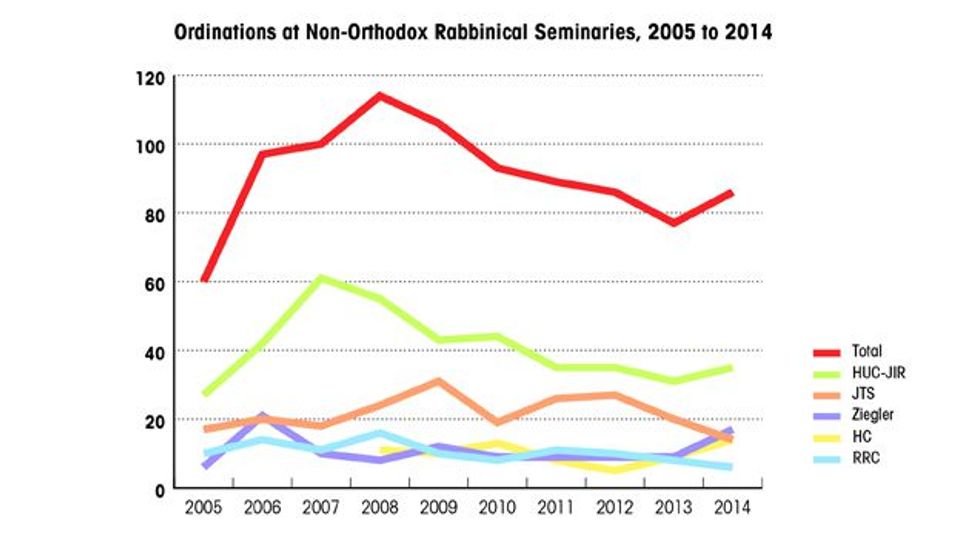 Bucking the Trend: Non-Orthodox seminaries have been ordaining fewer rabbis overall, except for non-denominational schools. 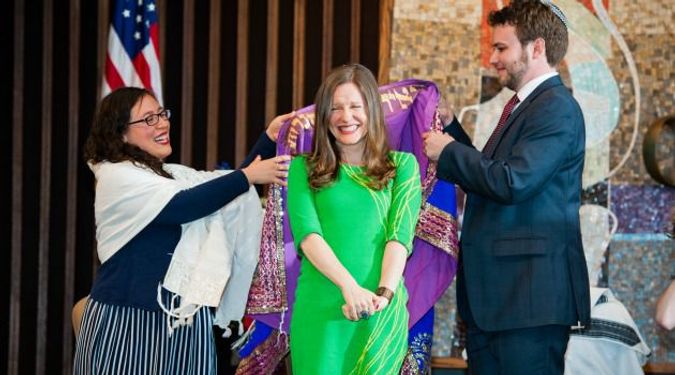 Instead, Nelson applied to Hebrew College, the new, progressive, nondenominational seminary in Boston, where he was ordained in 2013. It’s a path that more and more prospective rabbis are taking. Last year, Hebrew College ordained the same number of rabbis as the Jewish Theological Seminary, the Conservative flagship institution in Manhattan. This year, Hebrew College has more first-year students than all but one other non-Orthodox rabbinical seminary.

A Forward analysis of data provided by the five leading non-Orthodox rabbinical seminaries in the United States reveals a gradual decline in enrollment. There were 114 non-Orthodox rabbis ordained in 2008; only 74 first-year students matriculated at the same five schools in 2014.

The decline, however, is not distributed evenly. Hebrew Union College-Jewish Institute of Religion, the Reform movement’s 140-year-old seminary, ordained more than twice as many students in 2007 as there are in its first-year class this year; the Reconstructionist Rabbinical College outside Philadelphia ordained more than three times as many students in 2008 than there are in its first-year class now.

The trend threatens to disrupt a century and a half of dominance of the non-Orthodox rabbinic scene by three major institutions. The deans of those denominational rabbinical schools blame their enrollment problems on big-picture changes in the academic marketplace. Others say the causes are a shift in liberal Jewish culture itself — and that this may not be a bad thing.

“The good old days, I don’t think were so good,” said Rabbi Bradley Artson, who heads the Conservative-affiliated Ziegler School of Rabbinic Studies at Los Angeles’s American Jewish University, a newer rabbinic school with a progressive reputation. “I want to distinguish what’s good for the bureaucracy as opposed to what’s good for liberal Judaism… I want our primary loyalty to be to emerging Judaism, and secondarily to the institutions and their staffing.”

While the downward shifts in non-Orthodox enrollment aren’t drastic, the trends are clear: The nondenominational Hebrew College is growing, while the older schools linked to a single denomination are hurting for applicants. 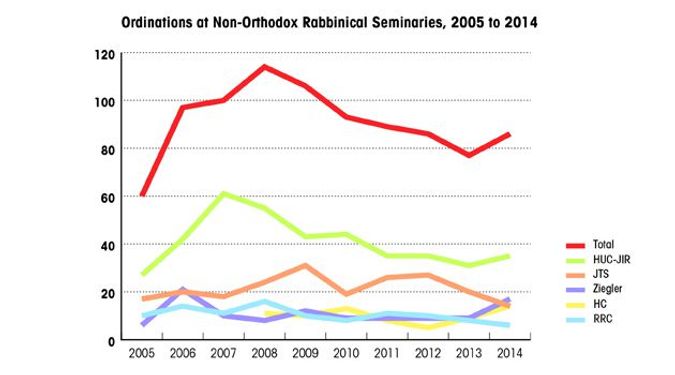 Bucking the Trend: Non-Orthodox seminaries have been ordaining fewer rabbis overall, except for non-denominational schools.

“We’re all kind of small right now,” said Rabbi Daniel Nevins, dean of the rabbinical school at JTS, which in 2014 ordained its smallest class in at least a decade. “I think there’s demand for rabbis. I just think we need more people who are idealistic and want to go into a world-changing profession, as opposed to just going into business.”

Nevins said that this year there will not be enough rabbis graduating to satisfy all the congregations coming to JTS looking to hire spiritual leaders. He suggested a connection between the enrollment drop and a broader decline in interest in the humanities, and noted that denominational Christian seminaries are also seeing lower enrollment.

Rabbi Aaron Panken, president of HUC-JIR, suggested that rabbinical school applications are cyclical. His school’s class of new rabbinical students is half the size of his 2007 graduating class, but Panken said that 2007 and 2008 were particularly large due to an increased interest after the September 11 terrorist attacks. “I think major societal upheaval drives people to think about religious issues more,” Panken said. “You also have cyclical pieces like the economy.”

At the Reconstructionist Rabbinical College, which last year ordained just six students — its smallest class in at least a decade — the president, Rabbi Deborah Waxman, blamed the lower numbers, in part, on the high cost of undergraduate education, which she said leaves potential rabbinical students unwilling to take on more debt. The school’s vice president of student development, Rabbi Amber Powers, noted that the Reconstructionist movement was completing a reorganization and that the school was adopting a new curriculum, and that those factors could have depressed enrollment.

Recent graduates of Hebrew College, meanwhile, say that they stayed away from the denominational schools precisely because of their institutional weight. They said that they liked the feeling of newness at Hebrew College, which graduated its first class of rabbis in 2008, and were put off by the older schools’ constraints. As a nondenominational seminary, Hebrew College does not prescribe observance guidelines for its students. Students who choose to use electricity on the Sabbath, for example, are not asked or pressured to change their practices. JTS, on the other hand, expects students to keep kosher, pray daily, observe the Sabbath and follow other traditional Jewish laws.

“I felt like I didn’t fit into the boxes the other schools offered, and Hebrew College didn’t force me to,” said Nelson, who now works as director of education at T’ruah, a rabbinic social justice group. Nelson said he considered RRC but didn’t consider JTS, due to the religious requirements. “I wanted to be at a school where I could be honest about how I practiced Judaism,” he said.

Other Hebrew College graduates said they liked that the school was still being formed. “I just felt like I really wanted something less institutional, less established,” said Rabbi Adina Allen, who graduated Hebrew College in 2014, regarding the reason she didn’t consider applying to HUC-JIR despite having grown up in the Reform movement. “I couldn’t sign up for everything in the Conservative halachic requirements, but I didn’t know where I was going to end up, so I really wanted that openness.”

To be sure, some students still are choosing the denominational schools. Sarit Horwitz, a JTS rabbinical student slated to graduate in May, said that she chose to apply only to JTS because rabbis she admired had gone there and the school offered strong internship opportunities. Still, she understands those who chose not to attend JTS. “I think there’s something appealing to people about things that are new and edgy and not part of long-standing institutions,” she said, also acknowledging that Hebrew College’s academic program is strong.

Hebrew College is not the only nondenominational school attracting rabbinical students. The Academy for Jewish Religion in New York and the Academy for Jewish Religion in California, alternative rabbinical schools with a shared history and generally older student populations, ordained a total of five new rabbis in 2014. And Yeshivat Chovevei Torah, the left-wing Modern Orthodox rabbinical school, ordained six rabbis in 2013 and two in 2014.

As the option of a nondenominational rabbinical school appears to eat away at the enrollment numbers of the denominational schools, Ziegler’s Artson may be the only dean who isn’t sweating. His school has had small and large graduating classes over the past decade, with a particularly big 17-rabbi class ordained in 2014.

Artson said that the decline in overall numbers of people entering the non-Orthodox rabbinate could have to do with the expansion of Jewish studies programs, which allow other routes to Jewish education than simply a rabbinical degree.

“What I’m not going to do is worry about it,” Artson said. “I trust this generation of young people, and I trust that if I provide them with great education, great nurturing, great spiritual opportunity, they will make out of it something that I can’t envision.”