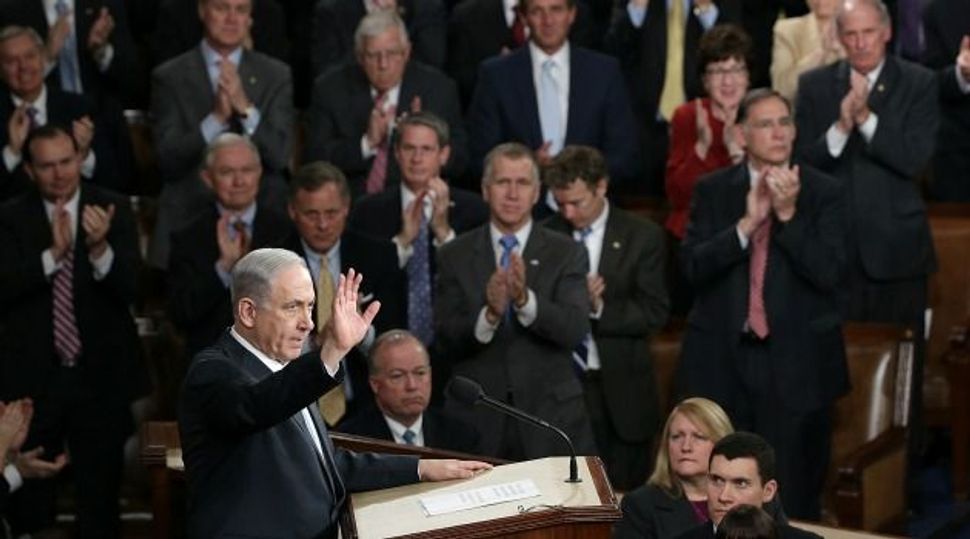 A mainstream Jewish community that fractured in the run-up to Prime Minister Benjamin Netanyahu’s speech to Congress is now reuniting for a frantic attempt to derail the nuclear deal the Obama administration is negotiating with Iran.

In the weeks prior to the Israeli leader’s address, Netanyahu’s arrangement with Congress’s GOP leadership to assail President Obama’s Iran policies from the House floor — just two weeks before he himself faces the Israeli electorate — rendered any discussion of the Iranian deal toxic.

But now, activists feel at ease again. Armed with the talking points spelled out by Netanyahu in his March 3 speech to the joint meeting of the Senate and the House, they have relaunched their campaign against the agreement reportedly taking shape. “It’s time now to move away from procedure and focus on the substance,” said a prominent Jewish activist who came to Congress to listen to Netanyahu. “I think it will be easier now.”

The day of the speech, Capitol Hill was all but taken over by pro-Israel activists. Members of Netanyahu’s delegation mixed with Jewish leaders and with donors to pro-Israel groups who were invited to hear his talk as honored guests. Busloads of American Israel Public Affairs Committee members, fresh off their annual policy conference, also spilled into congressional office buildings, energized to lobby their representatives against an Iran deal.

Netanyahu himself, close advisers said, also emerged energized from Capitol Hill, believing that his gambit paid off. A senior Israeli official who was involved in the prime minister’s speech told reporters hours after the talk that Netanyahu succeeded in changing America’s agenda back to the Iranian issue from its focus on the war against the group Islamic State. “Without the speech, the Iranian deal would get approved not only by the White House but also by Congress,” the source said, explaining why Netanyahu’s public feud with Obama was a reasonable price to pay.

An AIPAC delegate said Netanyahu’s speech now made it easier for her and her friends to convince lawmakers to pass legislation that would halt a race to a nuclear deal. “Now everyone here knows exactly what the problems are,” she said. The AIPAC member would not give her name, stating the lobby’s guidance of not speaking to the press.

In his speech, the Israeli leader rejected the approach adopted by the United States and five other countries involved in the negotiations for ensuring that Iran does not develop nuclear weapons. The reported agreement they are developing would impose strict limits on the Islamic Republic’s enrichment of uranium, accompanied by a comprehensive regime of inspection and monitoring of the country’s nuclear facilities for an unconfirmed period reported to be 10 years.

But in his speech to Congress, Netanyahu argued that only substantial dismantlement of Iran’s nuclear facilities would prevent it from achieving a “breakout” capacity to build nuclear weapons. This, he said, should be the negotiators’ central demand for lifting sanctions against Iran. New and tougher sanctions would force Tehran to negotiate on this basis, Netanyahu claimed. He said that the negotiators’ demands should also include an end to Iran’s “aggression against its neighbors,” its support for “terrorism around the world” and its threats to “annihilate my country, Israel.”

In private conversations, the Israeli leader dismissed early warnings against delivering the speech to Congress. There was a need for a dramatic step, he said, to sound the alarm bells against the looming deal with Iran.

The senior official involved in preparing the speech used the word “galuti,” a derogatory Hebrew term for a mindset of Diaspora Jews fearing any action that could aggravate the non-Jewish rulers, when speaking about those who warned against defying Obama.

Members of the Diaspora may not approve of that term, but on the issue itself, the mainstream American Jewish community now appears to be coming together behind Netanyahu’s criticism of Obama’s nuclear deal.

“Congress must assert its historic foreign policy role, review any agreement, and object if a bad agreement is reached,” AIPAC said in an official statement released after the speech.

Putting the controversy behind them, other Jewish groups and leaders issued strong calls backing Netanyahu’s approach on Iran. “The points he raised,” a statement by B’nai B’rith International said, should be ”seriously considered by the negotiators while there is still time to effectuate the change.”

The American Jewish Committee, which remained notably silent throughout the weeks of controversy surrounding Netanyahu’s speech, called on its members to send emails to their representatives in Congress, urging support for new sanctions legislation against Iran. J Street, the dovish Israel lobby, which backed U.S. sanctions against Iran at an earlier point, stood against the mainstream rush to support the Israeli leader.

In perhaps its most provocative critique, the dovish lobby asked rhetorically: “Who is going to determine U.S. policy toward Iran? Will it be the president of the United States or the prime minister of Israel?”

The dovish group Americans for Peace Now took a similar tack, declaring American Jews “appalled…at the sight of an Israeli Prime Minister demanding that they choose between supporting Israel and supporting the elected president of their own country on such a critical issue.”

The push by pro-sanctions activists is now focused on two pieces of legislation introduced in the Senate. The first, written by Republican Mark Kirk of Illinois and Democrat Robert Menendez of New Jersey, would impose new, more severe sanctions on Iran — a move that the Obama administration says would derail the negotiations. Another piece of legislation, co-sponsored by Menendez and Republican Bob Corker of Tennessee, would require that any deal with Iran be submitted to Congress for approval.

In what can be viewed as a sign that Netanyahu’s speech is already having an impact, Senate Majority Leader Mitch McConnell announced he would move forward the legislation requiring congressional approval of the deal. Menendez, who co-wrote the bill, opposes this move.

The administration has made clear that it will veto both bills, if they are approved.

Menendez, the Democratic driving force behind these two pieces of legislation, received a hero’s welcome at AIPAC’s policy conference. “I know there are more than a few people here in Washington who say that I’m outspoken in my defense of Israel,” he told activists in his speech at the AIPAC gathering. “Frankly, I’m not only proud of it. I’m fully prepared to stand on this stage today — or on any stage anywhere, anytime — to carry that message to both the friends and enemies of Israel around the world.”

Netanyahu did not address these pieces of legislation directly in his address. He instead laid down the rationale for increasing pressure on Iran and expanding the role of Congress in overseeing a deal. He spoke at length about the Islamic Republic’s involvement in unrest and terror across the Middle East, warning Americans not to be fooled by the regime in Tehran. “This regime will always be an enemy of America,” he told Congress. The Israeli leader called the agreement being discussed , even as he spoke, between Secretary of State John Kerry and his Iranian counterpart Mohammad Javad Zarif a “bad deal,” and urged members of Congress to act against it. In a statement to reporters at the White House shortly after, Obama said there was “nothing new” in Netanyahu’s address and that the Israeli leader did not “offer any viable alternative” to the deal being negotiated.

In background briefings, administration sources took a harsher tone, accusing Netanyahu of calling for “regime change” in Iran. Netanyahu’s Jewish supporters were in attendance in Congress as he delivered his speech. Nobel Prize laureate Elie Wiesel sat next to Netanyahu’s wife, Sara Netanyahu, at the gallery, alongside Harvard Law School professor Alan Dershowitz, former senators Joe Lieberman and Norm Coleman, and casino billionaire Sheldon Adelson, a mega-donor to the GOP who is also one of Netanyahu’s strongest supporters. Adelson, who founded an Israeli newspaper known for its pro-Netanyahu approach, gained even more attention when his wife, Miriam Adelson, accidently dropped her handbag from the gallery balcony onto the floor, hitting a staffer sitting below.

Also watching from the balcony was Rabbi Shmuley Boteach, whose recent full-page New York Times advertisement attacked National Security Adviser Susan Rice for being “blind” to genocide, “both the Jewish people’s and Rwanda.” The ad drew harsh criticism from most Jewish organizations.

In Congress, Jewish members tried to move beyond the controversy. Eight Jewish lawmakers, four in the Senate and four House members, were among the total of 57 lawmakers who chose to skip Netanyahu’s speech in protest. But most preferred to listen, even if unhappy with the circumstances surrounding the speech.

“I certainly want to hear what the prime minister has to say,” Rep. Jerrold Nadler of New York said as he walked toward the chamber. “I hope that we can shift from what is a diversionary debate over whether he should make the speech to the important issue of — if we get an agreement — is it a good agreement or not?”

Brad Sherman, a Jewish California Democrat, took issue with Democratic House Minority Leader Nancy Pelosi, who characterized Netanyahu’s speech as an “insult to the intelligence of the United States. “In a statement, Sherman said that Netanyahu’s speech contained “some new insight that Congress should carefully consider.”

But even Sherman, a staunchly pro-Israel Democrat, appeared to be skeptical of Netanyahu’s assurance that his approach would force Iran to accept his proposed new conditions for lifting sanctions. “It did not contain a clear roadmap of how to force Iran to accept a reasonable deal,” Sherman said of the speech.

The stance of such lawmakers is crucial. The relaunch of the sanctions campaign by Jewish activists will turn the spotlight once again toward a handful of Democratic legislators who could make the difference.

A Republican majority in both chambers can easily pass the bills requiring new sanctions and congressional approval of a deal with Iran. But Obama’s promise to veto the legislation means they will need Democrats to override the president with a two-thirds vote in both Houses. In the Senate, these include, among others, Jewish senators Chuck Schumer, Richard Blumenthal and Ben Cardin, who will now be under increased pressure to move off the fence and support the legislation.

In his speech and in private talks with lawmakers during his visit, Netanyahu projected a sense of urgency. There is no time to hesitate, he told them, since a nuclear agreement is around the corner.

“They’re going to sign a deal,” the senior Israeli official said. “No doubt about it.”