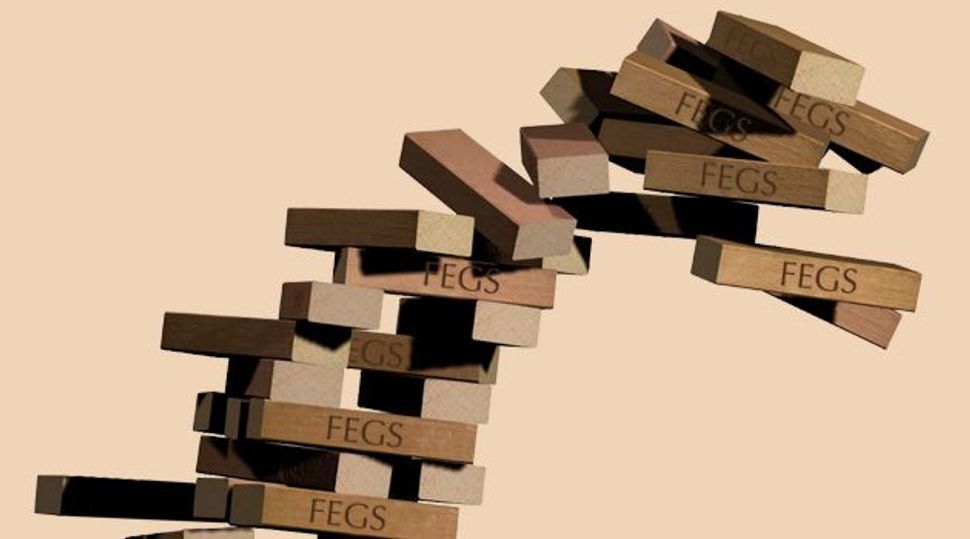 Just as a sneeze can set off an avalanche, and the murder of an archduke can spark a world war, the final collapse of one of the country’s largest Jewish charities may have been propelled by a letter from a state Medicaid regulator.

New documents obtained by the Forward show that the signs of trouble at FEGS Health & Human Services were apparent by July 2014, five months before the agency would publicly acknowledge its financial crisis. A dismal fiscal year had just closed, the group was in technical default on a $12 million bond issue and the group’s chief financial officer had left after only five months on the job.

Yet FEGS did not acknowledge its downward slide until November, days after the date on a letter informing the charity that a large portion of its Medicaid billings appeared to be invalid. It’s not yet clear what impact the letter had within FEGS’s upper echelons. But one week later, FEGS’s longtime CEO announced her retirement. And a week after that, on November 19, FEGS finally approached UJA-Federation of New York to admit that it had a problem.

The details of that collapse have remained murky, as FEGS has clammed up in the face of reported criminal investigations and multiple reviews by other agencies. But a 2014 FEGS financial report obtained by the Forward reveals new details on the agency’s slow collapse. The broad picture is of a charity that tried to grow its way out of obvious financial problems, then took months to realize — or admit — that its cash crunch was totally out of control.

The financial report was first described in a March 13 story in Capital New York, though obtained independently by the Forward.

Among the revelations in the FEGS financial report:

• An investment in its failed for-profit subsidiary SinglePoint lost FEGS $2 million in 2014.

• The charity claimed it was owed $49 million by various government entities.

• FEGS will owe $90 million in leases in the coming years.

• FEGS was in technical default on three bond issues.

• FEGS will wind down its for-profit HR Dynamics subsidiary.

• FEGS claimed that the expiration of contracts for two programs funded by the city’s Human Resources Administration would cost $11 million.

At the end, a charity with an annual budget of more than $200 million that claimed to serve more than 12,000 people a day with a range of social service programs was left in ruins. Its collapse has stunned the charity industry. Founded in 1934, FEGS offered a wide range of programs, many of them benefitting from major government funding. FEGS services included home care, workforce training, housing for the disabled, services for immigrants, and more. 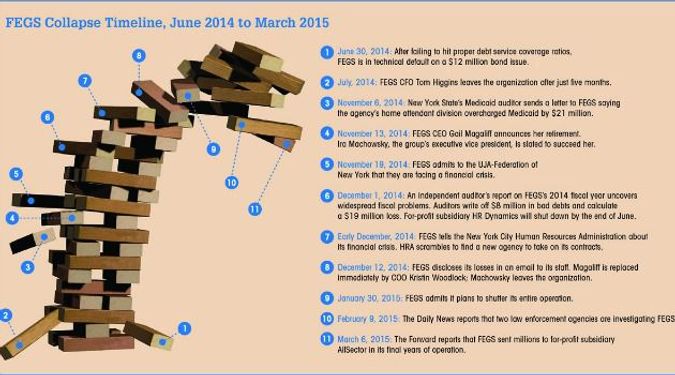 The November 6 letter from New York State’s Office of the Medicaid Inspector General said that an audit of FEGS Home Attendant Services, a not-for-profit FEGS subsidiary, found that a quarter of what it had billed to Medicaid over a four-year period should not have been paid out.

Of the $81 million that Medicaid reimbursed to FEGS Home Attendant Services from 2006 through 2009, OMIG estimated that the agency had overcharged Medicaid by $21 million. That $21 million figure is based on a sample of transactions reviewed by OMIG, and it represents a midrange estimate of the actual overpayment. OMIG reported with very high confidence that the overpayment was at least $14 million.

The letter constituted a warning, and FEGS will have a chance to contest the findings.

UJA-Federation said in a statement to the Forward that its affiliated agency had “a focus on growth that led FEGS to take on new government programs without understanding the full cost of operating them,” and that its poor financial systems “made it difficult for FEGS to document the full amount of reimbursement to which it was entitled under the contracts.”

Whatever the impetus was for FEGS to go to UJA-Federation, conditions within the charity appear to have deteriorated further by early December. FEGS’s auditing firm, Loeb & Troper, completed an audit report signed on December 1 that recorded a $19 million loss in the 2014 fiscal year.

But that wasn’t all the bad news revealed in the financial report.

FEGS was forced to write off $8 million in bad debts in 2014, up from just $1 million in 2013. The failure of its SinglePoint for-profit subsidiary, a partnership with the Jewish social service agency Selfhelp, cost FEGS $2 million in 2014. FEGS claimed it was owed $49 million by various government entities. And FEGS was out of compliance with the required debt service coverage ratio on three bond issues through the Dormitory Authority of the State of New York, meaning that it was in technical default.

In the financial report, FEGS said it was seeking a waiver from the Dormitory Authority. It’s unclear whether it received that waiver. Meanwhile, there were signs that FEGS had been trying in vain to grow its way out of its troubles. Salaries were up 14% year to year in 2014, while revenues were up just 4%.

“The story of things going wrong in 2014 is not necessarily one of their revenues drying up,” said Brian Mittendorf, a professor of accounting at The Ohio State University. “It’s just that they grew costs, particularly labor costs, at a much higher rate… and they were already operating at a very thin margin.”

There are signs of panic and confusion in the December 1 financial report. In a note at the end, auditors say that the conclusion of FEGS’s contracts with HRA to run two workforce development programs, called Back to Work and WeCARE, would incur losses of $11 million.

Yet HRA insists that those contracts would have been renewed if not for FEGS’s financial crisis — and that FEGS didn’t inform HRA of the crisis until early December, after the financial report was written, despite the report’s claim that the HRA contracts were ending.

“This all started with FEGS calling us up and saying they had a financial crisis,” HRA spokesman David Neustadt told the Forward. “There was no plan to move the contract until after FEGS called us up and told us they had extremely serious financial problems.” Things moved faster once the financial report was complete. FEGS disclosed its losses to HRA in early December, and to its staff on December 12. The Forward was the first to report on the disclosure. Gail Magaliff, the outgoing CEO, and Ira Machowsky, FEGS’s executive vice president who was set to succeed her, were both ushered out; chief operating officer Kristin Woodlock took over the organization.

It wasn’t until the end of January that FEGS acknowledged it would close.

The future of the FEGS wind down remains unclear. The social service agency Fedcap has taken on the remainder of FEGS’s WeCARE contract. Other programs have also found new homes. The charity has massive financial obligations — $90 million in ongoing leases alone. HR Dynamics, FEGS’s human resources for-profit arm, is set to shut down by the end of June.

There is no word on the future of AllSector, the for-profit subsidiary that received skyrocketing payments in the final years of the charity’s life. The largest question mark, meanwhile, hangs over when and whether FEGS will file for bankruptcy. That, as yet, is unknown outside the organization’s inner circles.