No Peace for the Dead in Callously Neglected Polish Jewish Cemetery 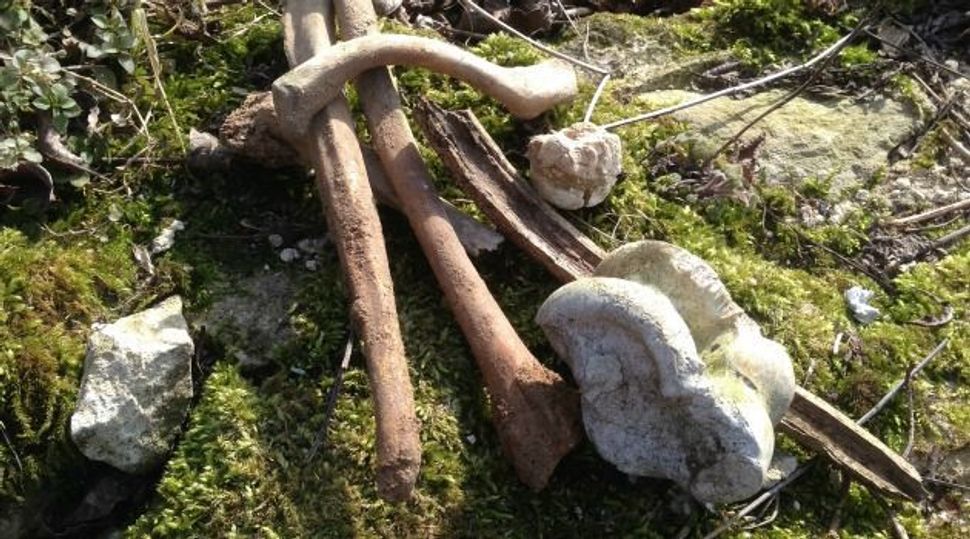 Unearthed: A series of construction projects have uncovered tombstones and bones of Jews buried in Kazimierz Dolny, aka Kuzmir. Image by Sergiusz Scheller

On the shore of the Vistula River, about a two-hour drive south from Warsaw, sits the picturesque town of Kazimierz Dolny. It’s a colorful, small community of some 3,500, popular with artists and gleaming with astonishingly well-preserved architecture of its past glory as a vibrant Renaissance-era trading hub.

Jews throughout the centuries helped create the cultural landscape of this town. At the end of the 19th century, they constituted half its population. In the mid-1930s, Yiddish filmmakers from America even came here to use the town as the location for two famous films: “Yidl Mitn Fidl,” a vehicle for the film star Molly Picon; and “The Dybbuk,” a filmed version of the S. Ansky play about a young bride possessed by a dead spirit.

The Holocaust ended all this, and all that’s left today are some preserved synagogues and community buildings, and Kazimierz’s distinctive local culinary tradition. To this day, local merchants sell the town’s famous rooster-shaped challah breads and onion pastries. Concurrently, Warsaw’s Jewish Community operates an exhibition center and a guesthouse in the Beitenu Synagogue. A couple of Jewish-themed restaurants enable visitors so inclined to imagine the atmosphere of prewar days.

But under the surface of this pleasant remembrance of Jewish life in the past, an ugly truth is poking out: Nearby, the bodily remains of the Jews who once thrived here lie exposed on the ground and completely forgotten, not just by the town, but even, apparently, by Poland’s organized Jewish community.

Unlike the synagogue buildings in Kazimierz, the Jewish cemeteries did not survive Nazi rule. The Germans opened a Gestapo headquarters in the local monastery and wanted to pave the roads to their torture house, so they used tombstones from two of Kazimierz’s Jewish cemeteries as a paving material. The New Cemetery was razed to the ground and it wasn’t until the 1980’s that some local non-profit groups collected tombstones from around the area and set up a lapidary on the cemetery’s site. The Old Cemetery, with its graves dating back some five centuries, on the other hand, was turned into a Wehrmacht garrison, and its history after 1945 unfolded quite differently.

After the war, in the 1950s, with nothing left of the Old Cemetery, the local communist authorities decided to build a school on the plot right next to it. Twenty years later, the cemetery land itself was used to build a soccer field, and all of the lower part of the graveyard was buried in concrete.

The upper part of the cemetery was left alone. But the construction and digging caused the soil to erode, slowly spitting out the bones and tombstones of Jews buried there. Polish children would go to the local school, which was located beneath a steep cliff flecked with skulls and bones. Yet nobody in town has considered this an issue since the school was built.

Meanwhile, a key opportunity was missed to re-evaluate the condition of the tombs lying beneath the soccer field when the municipality decided to renovate the field in 2008. Polish law requires landowners to send an archaeological team to investigate and secure any findings before construction takes place at a site of possible historical importance. The process is long, tortuous and costly. In this case, the construction documents do not even once mention the soccer field that used to be a cemetery; officially, it’s just land unit no. 1245/3. Deliberately or not, the city never issued any conditions for construction.

As things turned out, the renovated soccer field didn’t serve children for too long. In early October 2012, the school building exploded because of a gas leakage, rendering the whole building useless and in need of demolition. A tender for building the new school was settled in October 2014, and to the cheers of local parents, a Spanish company began the construction of a new multimillion school project.

In the course of all these events, the role, or lack of one, by one key player has been striking. How much effort have Polish Jewish authorities put into preserving the dignity of their forbears’ ancient bones? Local secular authorities may have turned a blind eye to the Jewish past on this piece of land. But preserving and guarding this legacy is among the prime obligations of the organized Jewish community and its leaders.

Speaking on condition of anonymity out of fear of local political forces, a former municipal official told the Forward that city authorities asked Rabbi Michael Schudrich, chief rabbi of the Jewish community in Poland, to come to evaluate the situation and give directions on how the bones should be preserved before the construction began. From Warsaw, Schudrich sent an aide, Aleksander Schwarz of the Foundation for the Preservation of Jewish Heritage in Poland. But according to this source, Schwarz apparently made no remarks or comments about the condition of the cemetery and instructed the local authorities not to do anything and to leave the land as it is.

But the land as it is sends chills down the spine. Walking around the upper part of the cemetery, one can see hipbones and skulls sticking out of the ground next to empty beer bottles and leftovers from a bonfire. The steep cliff that separates the soccer field from the upper level reveals bones, skulls and stones of old Jewish graves.

Multiple attempts to reach Schudrich at his office for comment on this issue were unsuccessful. An office receptionist each time merely said that he would be in later.

But in a statement to the Forward, the Foundation for the Preservation of Jewish Heritage in Poland, the institution in charge of supervising Kazimierz Dolny’s Old Cemetery, said, “Last year, our representatives visited the cemetery and did not find any exposed burials.”

Joanna Stefańska moved to the town only a couple of years ago. But she already knows differently. “Everyone in Kazimierz knows that these bones are there,” she said. “My children would come back from school and say they found bones at the soccer field.”

In its statement, the foundation put the onus on municipal authorities to address any problems. “We are truly saddened with its condition,” the statement said, “but the cemetery is not owned by the Foundation, but by the City of Kazimierz Dolny. Our Foundation has asked the local authorities in the past to secure the cliff from erosion.”

One of the opponents of the city’s policy toward the Old Cemetery is Tadeusz Michalak, an architect and a prominent member of the local community.

“Everyone here pretends that nothing is happening,” he said. “We have advocated for commemoration of the Old Cemetery time and time again, but to no avail. None of the mayors were interested in it at the time.”

Back in 2000, Michalak launched a competition for a monument design. The jury consisted of architects, historians and academics. A design was chosen, and the project just needed a green light from the city hall. Fifteen years later, it has yet to receive the authorities’ approval. The appeal to the city to commemorate the cemetery was repeated last year by the organizers of the Pardes Festival, which takes place in Kazimierz each summer, but again, there came no response.

Andrzej Pisula, the current mayor of Kazimierz Dolny who was elected last December, announced in February that the cemetery will finally be commemorated and a section of its old wall will be restored, though he did not say when.

Asked about the bones in the Old Cemetery, he told the Forward that no one from the Jewish Community has talked to him about it.

“We cannot act on our own in this matter,” he said. “We are open to cooperate with the [Jewish] community to solve this problem, but they’ve never mentioned anything.”

Pisula said he would raise the issue himself at his next meeting with Jewish communal representatives.

“We are keen to resolve this situation, but right now we’re in limbo on this one,” he said.

The callousness seems ubiquitous, both from locals and from Polish-Jewish authorities. As a model shtetl for Hasidim and a popular retreat among Jewish artists Kazimierz Dolny, or Kuzmir in Yiddish, was one of the most important places on the Jewish map of Poland. Given the treatment of this place, one can only wonder what is happening to thousands of other cemeteries in smaller towns and villages across Poland.

No Peace for the Dead in Callously Neglected Polish Jewish Cemetery