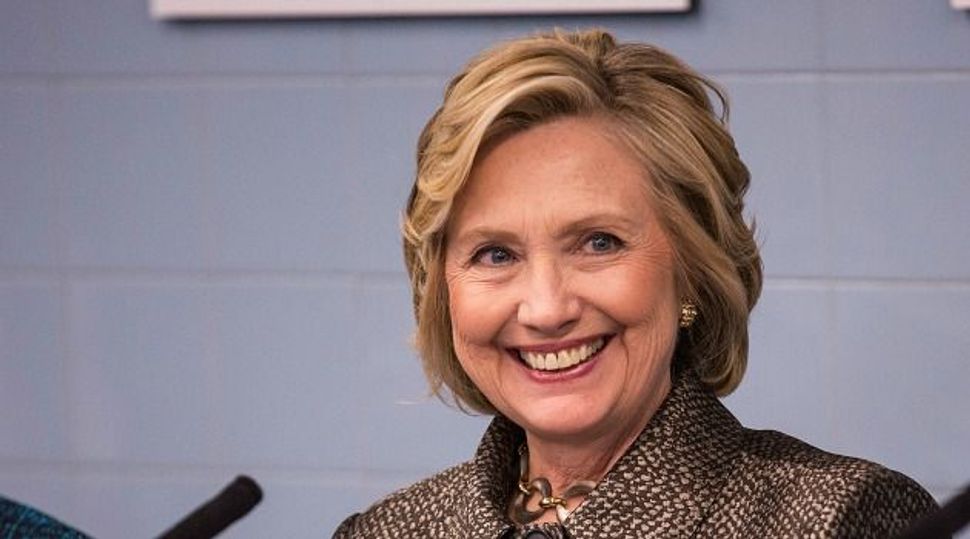 Some of the biggest industry fundraisers, like Jeffrey Katzenberg, who famously backed Obama over Clinton in the 2008 race, long ago pledged their support. With a lack of serious competitors, progressives who are lukewarm to her candidacy face a race with few alternatives. And for almost two years, a number of industry figures have been raising money in a kind of pre-campaign, as if to ensure that some of the bitter divisions of the last time around don’t materialize again.

Fundraising sources say that Clinton’s first swing through Los Angeles to raise money is in the planning for early May, with one of the events hosted by media mogul Haim Saban, longtime friend of the Clintons, at his home. A spokeswoman for Saban did not return multiple requests for comment.

An announcement of her candidacy could come as early as this weekend, with multiple media sources reporting that it will be made on Sunday followed by trips to New Hampshire and Iowa.

Clinton entered her last campaign – “I’m in, and I’m in to win” – as the presumptive front-runner, but in the entertainment industry that quickly was countered by Barack Obama’s entrance in the race. Katzenberg, David Geffen and Steven Spielberg hosted the cycle’s first major industry event for Obama in February, 2007, and a the next day, a Maureen Dowd interview with Geffen in which he bashed both Clintons triggered the first signs of acrimony between the two campaigns.

As the Clinton-Obama primary race dragged on in 2008, Hollywood was split, to the point of acrimony carried out in email chains and at cocktail parties. A meeting with then-Democratic National Committee chairman Howard Dean turned in to a drawn-out argument over party delegate rules. Larry David took to the Huffington Post to write (and read) an essay in which he called her “unhinged.” Harvey Weinstein reportedly threatened to cut off money to House Democrats if Speaker Nancy Pelosi didn’t agree to a primary revote that presumably would have allowed Clinton to secure added delegates in Florida and Michigan.

So far it’s hard to see those fault lines materializing.

“There is both great respect for Hillary and great enthusiasm for her expected candidacy,” says Andy Spahn, whose firm Gonring Spahn & Associates represents figures like Katzenberg and Spielberg. “The stakes are so high…possible Supreme Court appointments and the threat the Republican agenda poses to all that President Obama has accomplished.”

This time around, the Clinton naysayers on the left are so far without the formidable presence of an alternative of Obama’s stature, even if they have concerns about her candidacy. Adam McKay, co-creator of Funny or Die, said in an interview with Variety’s “PopPolitics” last September that he thinks “her excitement factor is going to rise and fall based on how horrible the Republican candidate is.” He expressed concerns that she was too pro-big corporate and hawkish, calling his sentiment “lukewarm” and pointing to alternatives like Elizabeth Warren.

In fact, a group called Artists for Warren, an offshoot of MoveOn, held an event in February, with celebrities like Mark Ruffalo offering support. Norman Lear has said that he would like to see Warren run for president – and recently hosted her for an event at his home – just not necessarily this year. He also is good friends with the Clintons. “Too bad one isn’t a Republican. We would get to see the two running against each other,” he quipped to Variety’s “PopPolitics” last year.

The obvious problem with a Warren candidacy is that she has repeatedly said she is not running.

“The whole coziness [by Clinton] with the business community is a concern for a lot of liberal Democrats,” says one top industry executive, who declined to be identified. “There’s a lot of fans, too. But part of this is going to rest on her shoulders. Can she rally the troops and say, ‘This is not going to just be the same old Clinton machine?’”

But Geffen, despite the harsh words about the Clintons in 2007, has said that he would “absolutely” support Clinton this time around. The Clintons ties in the entertainment community extend back to Bill Clinton’s days as governor of Arkansas, probably closer still than even those of Obama after seven years in office. Saban became one of the top donors in the Democratic party during Clinton’s presidency, and already has said that he would contribute “as much as needed” to the Clinton campaign.

Ben Austin, a former aide in Bill Clinton’s White House who also worked with actor-director Rob Reiner on California school reform, said that Clinton’s assets will be obvious. “I do think her real self is quite likable and electable,” said Austin, who now works at a non profit for school reform. “But that means being authentic and that can be tough when you have been through all the things you have been through.”

There also has been a movement to lay the groundwork for a Clinton campaign well before it began. Producer Howard Gordon hosted an even last fall for the SuperPAC Ready for Hillary, with Burt Bacharach singing “Raindrops Keep Fallin On My Head” and playing other standards on a clear Southern California day. Ryan Murphy also was among the hosts, and such figures as Dana Walden and Gail Berman attended.

Since she resigned as Secretary of State, Clinton herself has made multiple visits to appear at Hollywood-centric events, most recently a fundraiser in October in Brentwood that was hosted by Katzenberg and raised $2.1 million for Senate candidates.

Katzenberg not only is expected to raise money for her campaign but for a SuperPAC, PrioritiesUSA, that is aligning with her candidacy.

In fact, a challenge for the campaign may be managing the relationships the Clintons have built up over the years, with some fundraisers who worked for Obama wondering if there are just too many people angling for visibility to make it all worth their while.

An industry figure long active in politics says that “one of the significant challenges her candidacy faces is managing the internecine and internal competitions to be seen as closest to the seat of power. You are talking relationships, and feeding at the Clinton trough, that has gone on for 30 years. The challenge for the Clinton team now is to know when and how to say ‘No.’”

Political and philathropic consultant Lara Bergthold says, “There will be a lot of jockeying for that. But there’s no lack of need to raise money. Everyone can have their time in the spotlight.” An advantage for Clinton is that she doesn’t need to have a celebrity fronting her campaign rally to draw a crowd, and she can also draw on that support to host their own events.

Bergthold said that among some industry progressives, “I would say there is watchfulness. People are watchful to see what she rolls out and when.” She said that there has been encouragement from what Clinton has taken progressive positions on such issues as the minimum wage and education. Yet from now until the general election, she said, it will be a “tough race.” “We all need to buckle up,” she said. “It is not going to any way be a coronation.”

When it comes to enthusiasm, there is also the obvious: Clinton would be the first woman president, something that donors say will help draw excitement as well as a certain kind of disbelief that it hasn’t happened yet.

And perhaps nothing will unite industry Democrats than the prospect of a Republican in the White House. After all, that is another difference from 2008, when Democrats went into the election in control of Congress.

“I don’t see any sideline sitting in Hollywood on this one,” said one prominent Southern California fundraiser. A bellwether for the industry’s enthusiasm for electing candidates could come in the coming days, when California Attorney General Kamala Harris, running for an open Senate seat after Barbara Boxer’s retirement, reports her first fund-raising totals.

“There is a lot of entertainment money coming in there,” the fundraiser said. “You will see they are in a giving mood, in a pretty serious way.”